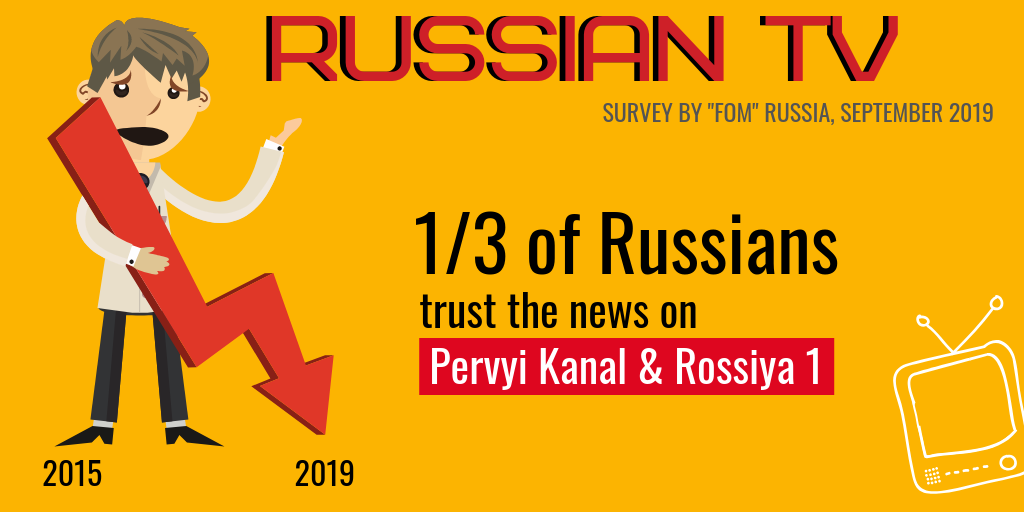 Only 1 in 3 Russians say they trust the news programmes on the state-controlled TV channels Pervyi Kanal and Rossiya 1, a recent survey by the Public Opinion Foundation (FOM)  shows.

According to the respondents, one of the main reasons for the deteriorating news quality was the lack of truthful, objective information and the abundance of propaganda and censorship. People were also dissatisfied with negative, immoral information and lack of variety and substance, with the same faces dominating the TV screens.

The number of Russians who believe that the quality of news improved has been steadily decreasing as well – from 52 percent in 2016, to 30 percent this year.

Nationwide TV channels remain the dominant source of news in Russia. 47 percent of those Russians who watch TV learn about the latest developments in their country and abroad from the state–controlled Pervyi Kanal. For 43 percent the main source of news is Rossiya 1, an official state TV channel whose CEO is appointed directly by the Russian president.

However, the trust level in the news on Pervyi Kanal has gone down from 53 percent in May 2015 to 33 percent in August 2019; the decline of trust in Rossiya 1 is slightly less steep – from 46 percent down to 31 percent during the same period.

The lack of trust in news on the state-controlled channels is hardly surprising: Out of 6,400 pro-examples of Kremlin disinformation collected by EUvsDisinfo since 2015, more than 850 come from Pervyi Kanal and Rossiya 1 (or from Rossiya 24 – Rossiya 1’s sister channel).

These state-controlled national TV channels have claimed, among other things, that the members of the European Parliament use “Russophobia” to advance their political careers; that people in France and Germany are forced to apologize to migrants who rape them and that British military advisers have forced Ukraine to stage a chemical attack – and blame it on Russia.

There has also been consistent denial of any kind of Russian involvement in the Salisbury poisoning and the downing of the flight MH17, accompanied by abundant accusations of “Russophobia” in the West.

Ukraine remains a constant fixation and a target for disinformation both on Pervyi Kanal and Rossiya 1 (and, for that matter other federal channels). Most recently, pundits on Pervyi Kanal claimed that NATO plans to build a military base in Crimea led to Maidan (NATO never had such plans), and that many regions in Ukraine dream of joining Russia.

It has been reported before that many Russians watch TV news even if they do not trust it.

Nevertheless, just like in 2015, more than half of the respondents (52 percent) excluded the possibility to abandon watching TV in favor of other sources of information.