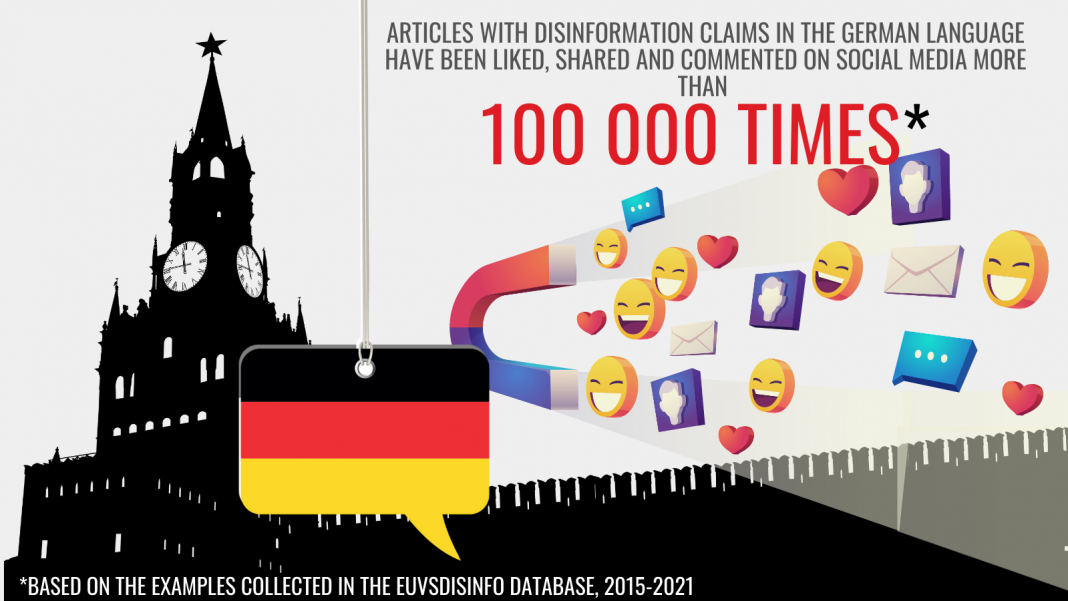 The EUvsDisinfo database contains over 450 examples of pro-Kremlin disinformation claims in the German language that were collected between 2015 and 2021. Our analysis shows that the articles in which these disinformation claims appeared have been liked, shared and commented on social media more than 100,000 times (by September 2021).

For our analysis we took 448 examples of pro-Kremlin disinformation claims that appeared in the German language only (the number of examples of disinformation claims in the EUvsDisinfo database referring to Germany in multiple languages is almost double that – 848). We used the Buzzsumo analysis tool to see how far these claims in the German language have spread on social media. Buzzsumo retuned results for 352 of the claims, showing that the total sum of engagements on platforms such as Facebook, Twitter and Pinterest was over 100,000.

The top five most engaged-with articles containing disinformation claims reflect some of the most prominent tropes of pro-Kremlin narratives about the war in Syria, NATO and military exercises, denigration of Belarusian opposition, migration crisis and of course, the poisoning of Alexei Navalny.

Disinformation is just the tip of the iceberg

This, however, represents just the tip of the iceberg of the pro-Kremlin media’s presence in Germany. And the issue goes way beyond disinformation, i.e., claims that are verifiably false.

According to the German Marshall Fund, Russia has an outsized influence in Germany with its state-backed outlet RT Deutsch. Our analysis confirms that. Compared to some of the most read media outlets in Germany, RT Deutsch has one of the smallest audiences on social media (Facebook and Twitter); however, what it lacks in size is compensated with activity. Put together the number of Facebook posts and Tweets from RT Deutsch accounts from January to September 2021 is second only to Frankfurter Rundschau, a German daily, and far ahead of the-Kremlin’s second network in Germany, Sputnik (recently re-branded to SNA news.) 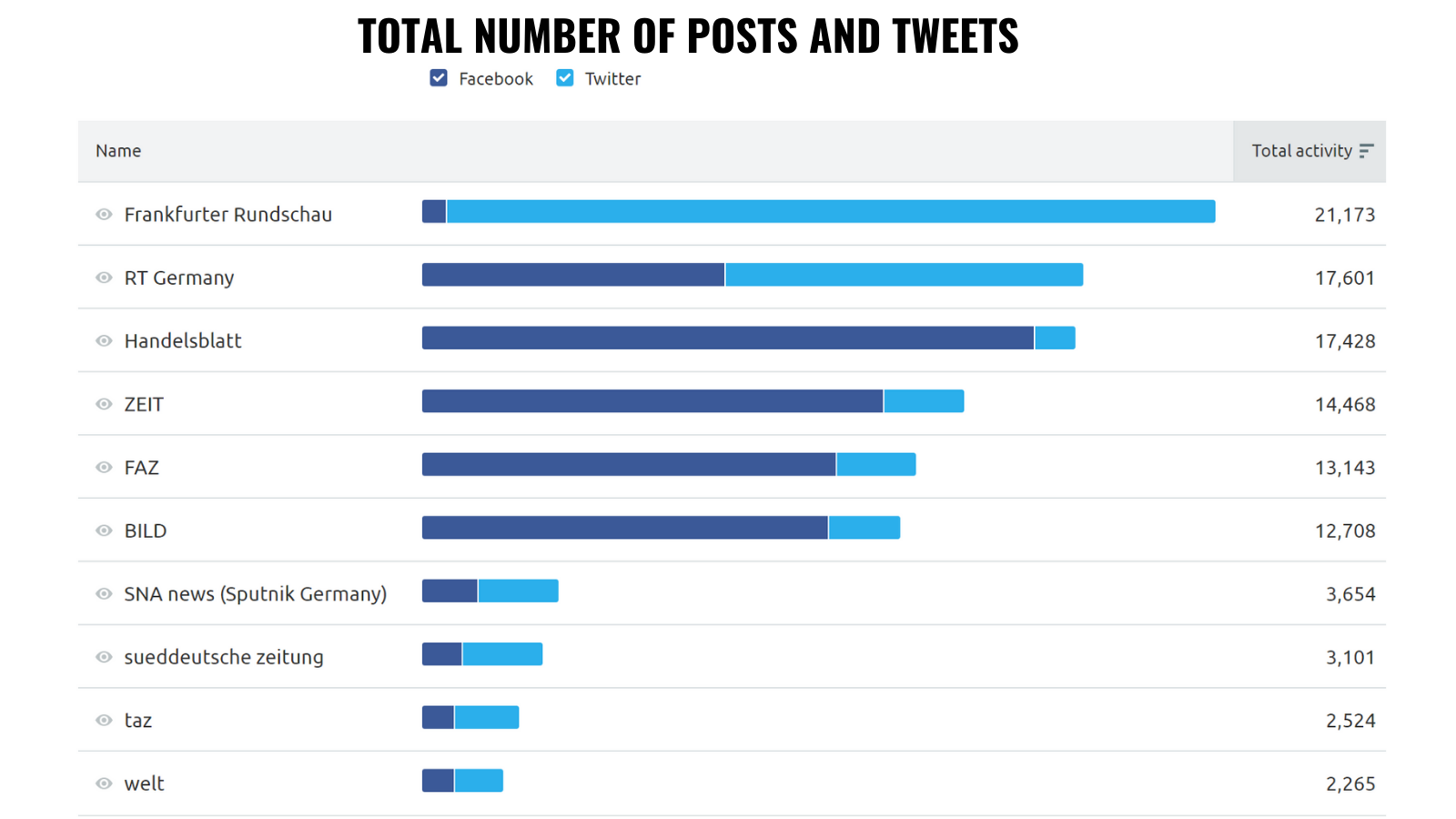 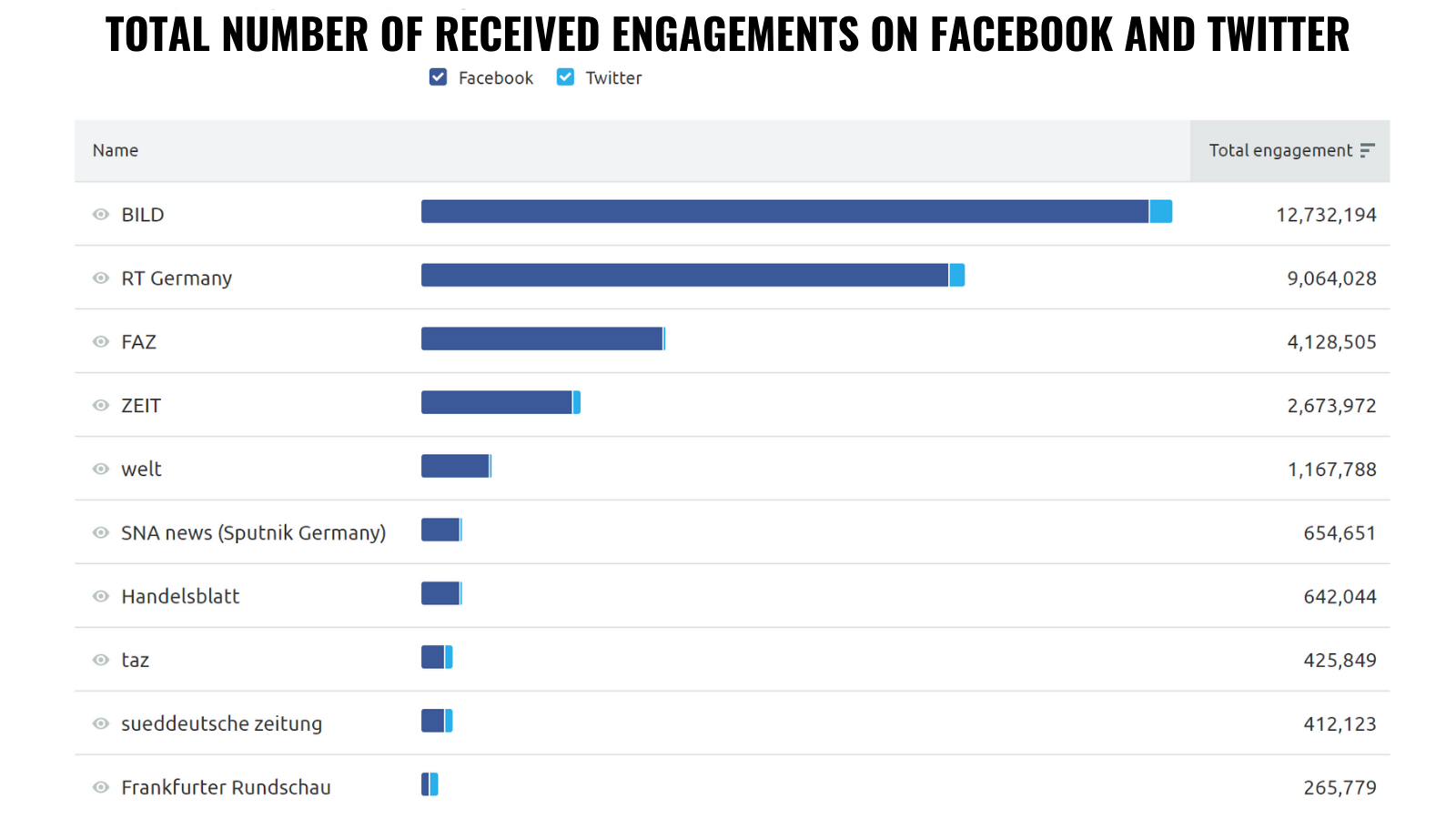 Of course, not all of these thousands of social media posts contain disinformation. But, as observed by the German Marshall Fund, RT Deutsch “spreads or generates content around certain positions on cultural issues to exacerbate socio-political divisions […] It has amplified controversies about the coronavirus to tarnish the credibility of the government and state institutions.”

In other words, it seeks to sow division and polarise.

The hyperactivity of RT Deutsch’s audience matters in this regard. Content that receives more engagement spreads much further online. The top five most engaged-with posts from RT Deutsch in 2021 show that particularly divisive headlines spread farthest – especially with regards to the pandemic, vaccinations and domestic measures for containing the virus. 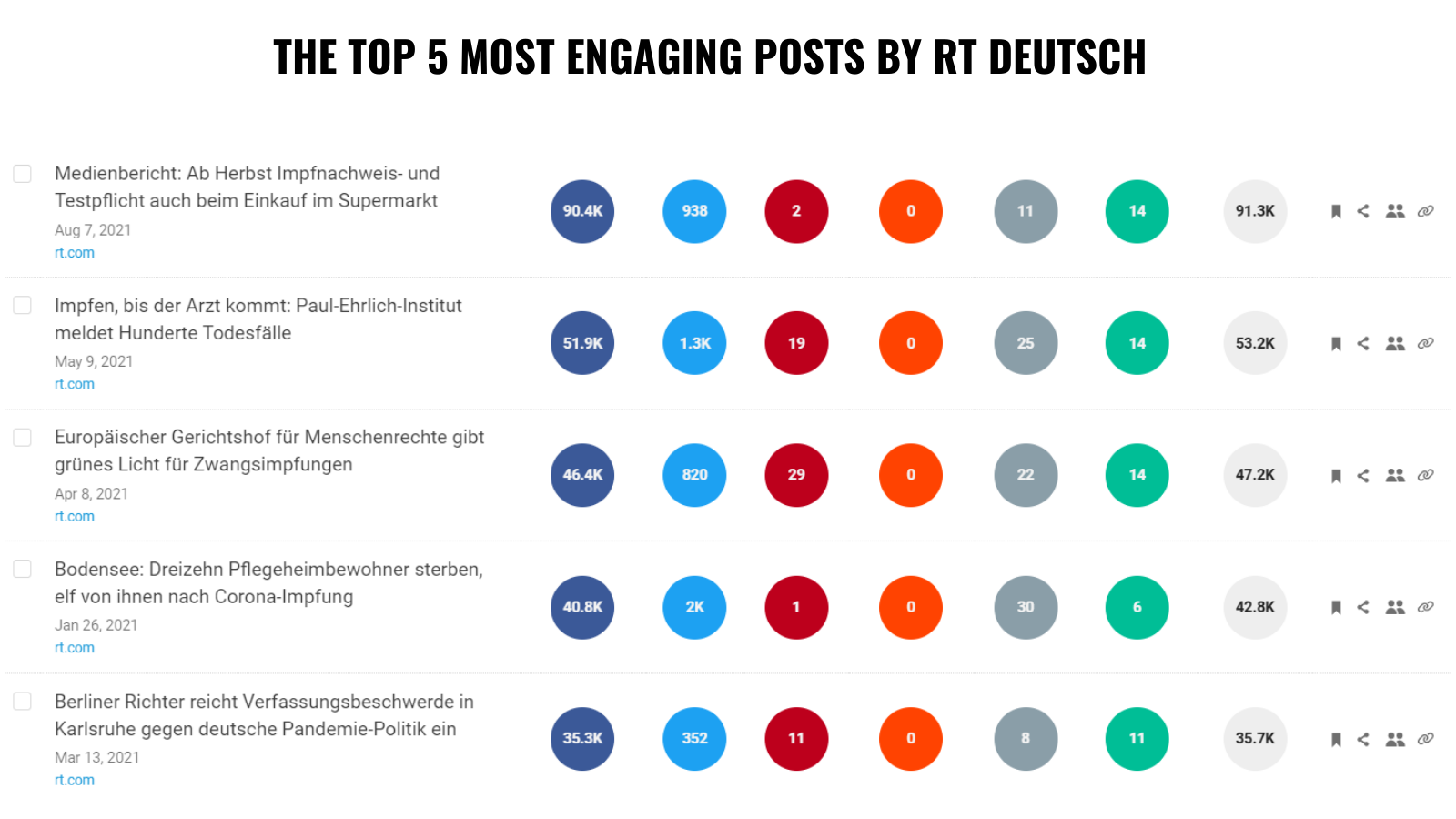 January to September, 2021, according to buzzsumo.com. The headlines are (top to bottom: “Media report: From autumn vaccination records and tests will also be mandatory when shopping in the supermarket”; “Vaccinate until the doctor comes: Paul Ehrlich Institute reports hundreds of deaths”; “European Court of Human Rights gives the go-ahead for compulsory vaccination”; “Lake Constance: Thirteen nursing home residents die, eleven of them after corona vaccination”; “Berlin judge files constitutional complaint in Karlsruhe against the German pandemic policy”.

In the aftermath of the European Election in 2019, we observed that instead of orchestrating large-scale coordinated foreign influence campaigns, pro-Kremlin disinformation actors were mainly nurturing divisive, populist and anti-establishment attitudes in Europe. This trend seems to continue, increasingly blurring the lines between information manipulation and authentic public debate.