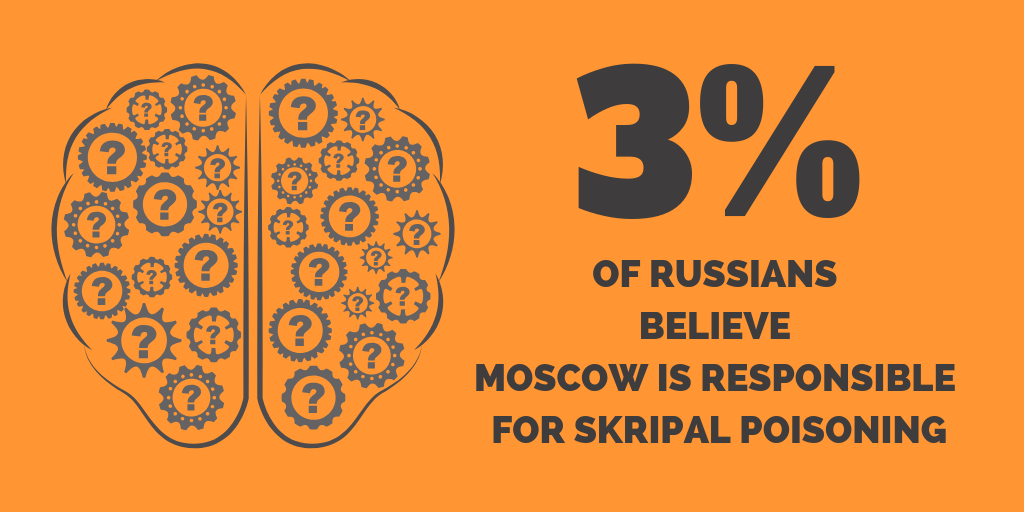 Britain has charged two Russian military intelligence officers with poisoning former Russian spy Sergei Skripal and his daughter, but only a fraction of Russians pin the blame on their country’s secret services.

Another 56 percent of respondents said “it could have been anyone,” and 13 percent were unable to answer the question.

Sergei Skripal was found unconscious on a bench in the British city of Salisbury in March along with his daughter Yulia.

Skripal moved to Britain in 2010 after being released by Russia in the biggest spy swap since the end of the Cold War. He had been serving a 13-year prison sentence for spying for Britain.

In September, British prosecutors charged two Russian men with the attempted murder of Skripal and his daughter using Novichok, a military-grade nerve agent.

Prime Minister Theresa May said the pair, believed to be officers in Russia’s GRU military intelligence service, had “almost certainly” acted with approval from “a senior level of the Russian state.”

Traces of Novichok were found in a London hotel room they stayed in before traveling to Salisbury.

Moscow has denied involvement and dismissed the case as an act of provocation against Russia.

The head of Russia’s foreign intelligence agency, Sergei Naryshkin, has accused Britain and the United States of being behind the poisoning.

And as demonstrated by the Levada poll, this narrative appears to have gained traction in Russia.

Russian media and officials have put forward a multitude of different narratives about the Skripal case, a well-honed disinformation tactic designed to confuse audiences.

Here you can find EUvsDisinfo’s timeline of the Russian disinformation campaign.

RFE/RL has also published a list of Russia’s “hodgepodge of theories, evasions, and refutations” on the case.