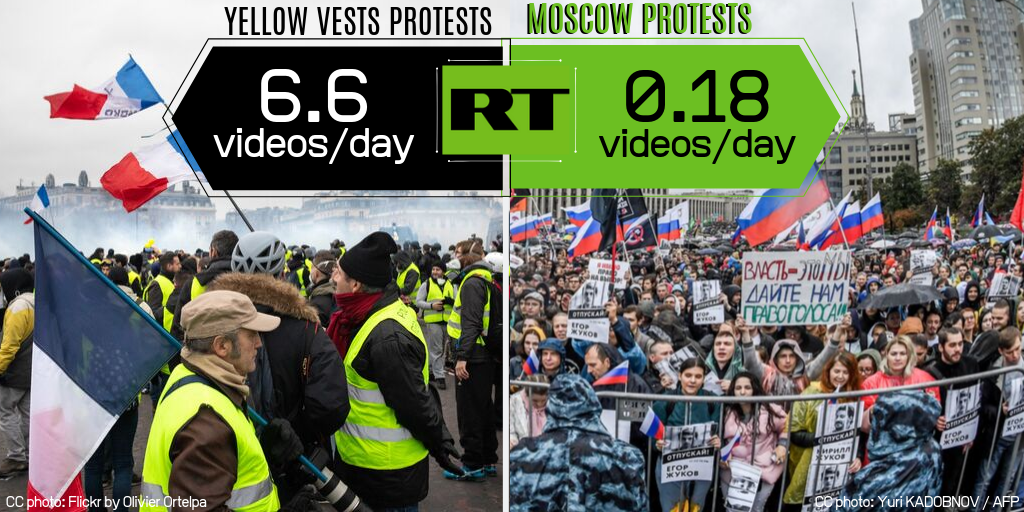 For pro-Kremlin social media the Yellow Vest protests were 37 times more important than the protests in Moscow.

The Russian local election and the protests in Moscow have passed its peak and now it is a good time to take a look at the coverage of those protests. As the frustrated opposition candidates were barred from running for the City Council, Muscovites began taking to the streets on 14 July. The protests turned out to be the largest since 2011-2012, when Russians protested against election fraud and thus the pro-Kremlin media could not afford to ignore them. However, publicly available data shows that the coverage of the Moscow protests was modest to say the least.

Between 14th of July and 9th of September the RT German YouTube channel published 6, RT France 3 and RT International – 1 video. We divide that by the number of days, which is 57, and we have a baseline of 0.18 for the coverage of the Russian protests.

Next up were the protests in Hong Kong. On 31th March, people took to the streets to demonstrate against plans that would have allowed for extradition from Hong Kong to mainland China. Over the span of 162 days, RT’s YouTube channels published a total of 229 videos in English (RT International, America and UK), in Spanish, French, Italian and German. That gives us 1.41 videos per day, i.e. close to 7.8 times more intensive coverage of Hong Kong events than the ones in Moscow.

The biggest discrepancy in coverage however appears when the protests in Moscow are compared to those of the Yellow Vest movement in France. The latter began on 17 November 2018, and during those 296 days RT’s YouTube channels produced a total of 1,973 videos about the Yellow Vest protests, in other words – a record 6.6 videos per day.

The conclusion? Well, when the amount of videos produced per day is compared, the Yellow Vests protests are 37 times more important for RT’s YouTube channels than the Moscow protests. 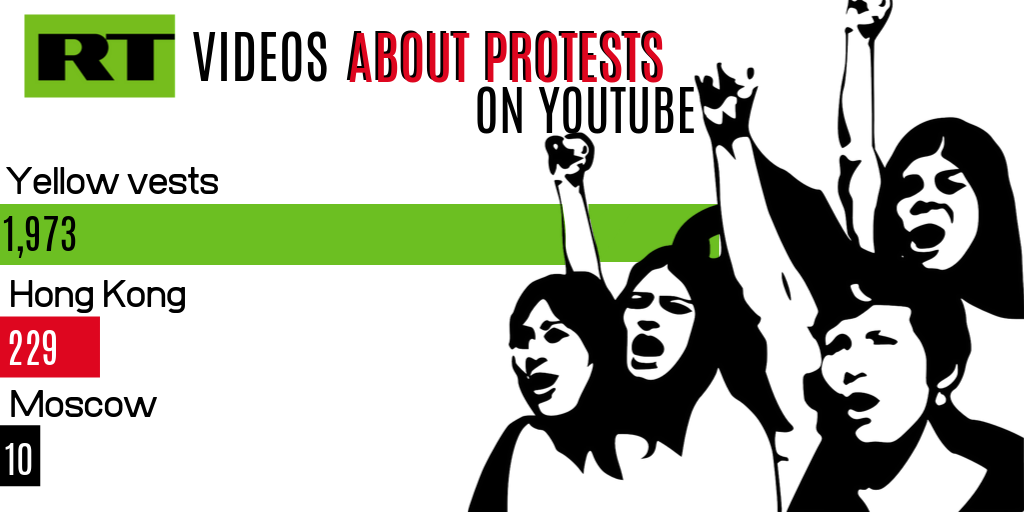 The pro-Kremlin media targeting Russia’s domestic audiences was largely ignoring the protests in Moscow in the beginning. But very soon pro-Kremlin sources started a campaign, which presented the protesters as not being voters in Moscow; downplayed their numbers and spread accusations that they were participating in a foreign conspiracy.

Surprised by the state media’s narratives, a number of independent Russian media outlets have offered live online coverage of the protests and have challenged the pro-Kremlin disinformation about the protests in Moscow.

At the same time, RT’s international audiences remain targets of a disproportionate coverage that echoes one classical point from the Twitter parody account Darth Putin, which claims that “the purpose of Russia Today is to make sure you have no idea what’s actually happening in Russia today”.