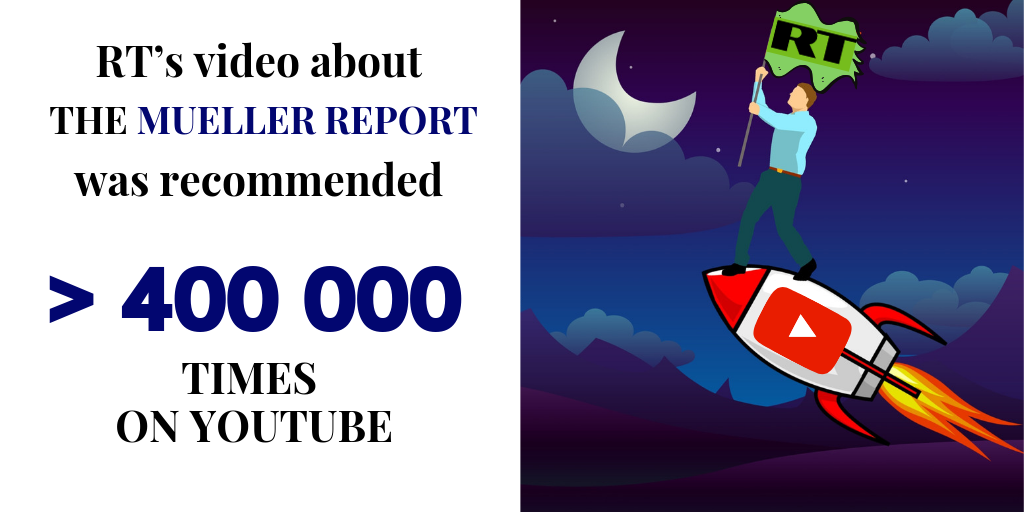 The research by AlgoTransparency reveals that RT’s clip was recommended to viewers looking at videos from at least 236 YouTube channels, that belong to major news corporations, fringe websites as well as pundits from across the political spectrum.

The clip itself, in line with extensive pro-Kremlin disinformation campaign around the Mueller report, is highly critical of the American press coverage and calls journalists “Russiagate conspiracy theorists”. It has been watched just over 64 thousand times so far. However the number of recommendations it received shows that RT has managed to instrumentalize YouTube algorithm, which recommends the videos it predicts the viewers will want to see. This, according to Guillaume Chaslot, a former YouTube engineer and the founder of the AlgoTransparecy, can lead to gradual and subtle elevation of Russian views online.

The YouTube algorithm uses deep neural networks and machine learning to match the viewers with the videos they want to watch, with the aim for users to spend more time on the platform – and see as many ads as possible. More than 70 percent of time spent on YouTube is spent watching what the algorithm recommends.

YouTube has disputed AlgoTransparency’s methodology, data and findings and said it could not reproduce the results.

AlgoTransparency findings come from the daily monitoring of 1000 popular YouTube channels. According to the company, the real number of recommendations that the RT clip received from all YouTube channels is likely to be far higher.

RT calls itself the most watched news network on YouTube, claiming around 8 billion views. However it has been known to manipulate its online viewership numbers before.

RT’s most popular YouTube videos seem far removed from (geo)politics: currently top performing clips are of a homeless man with a great voice, a tsunami, meteorite crash and an earthquake. But such content serves as way to normalize the RT brand as a conventional news media as well as hook new audiences with funny and emotional videos. Nevertheless, the Kremlin lines are never too far away. It is a “disguise and seek” tactic that we have seen replicated by RT’s  social media offsprings “InTheNow”, “ICYMI” and “RedFish”.