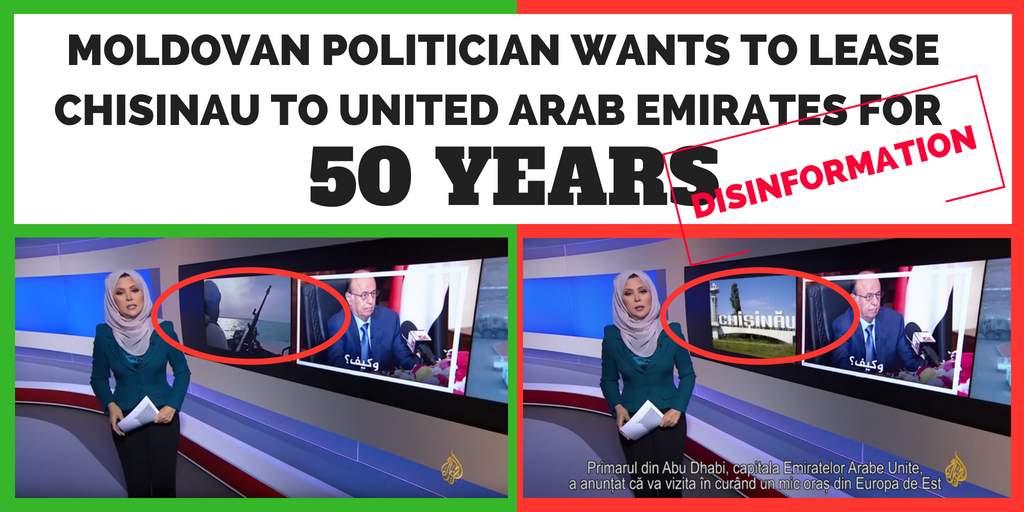 A falsified news report accuses a pro-European Moldovan politician of offering to lease Chisinau to the Crown Prince of Abu Dhabi for 50 years.

The disinformation story appeared on stiripespuse.com, a Romanian-language news website created in February 2018 — three months before the upcoming local election for Chisinau’s mayor on May 20.

The targeted politician, Dignity and Truth Platform Party (PPDA) leader Andrei Nastase, is a candidate in the election.

An accompanying fake video was posted on the website’s Facebook account. The story was debunked by Moldova’s Stopfals.

According to Stiri pe Spuse, the Crown Prince of Abu Dhabi, Sheikh Mohammed bin Zayed, has already accepted to rent the Moldovan capital for half a century with the task of modernising it, in return of which Nastase allegedly pledged to “build several mosques and create a neighbourhood for Arabs” in Chisinau.

To promote the bogus claim, Stiripespuse.com – which is registered in the U.S. town of Beaverton and doesn’t list the names of any of its editors or journalists – doctored a news programme by Al Jazeera.

The original programme in Arabic doesn’t make any mention of Moldova. An unrelated news report focusing on Chisinau’s heating system and featuring a Moldovan flag was pasted into the Al Jazeera programme. Fake subtitles outlining the alleged plans to lease Chisinau to the United Arab Emirates were then added to the images.

It has also gone viral on Odnoklassniki, a Russian social networking site popular in Moldova, where it currently has more than 407,500 views.

Moldova has a population of 3.5 million.