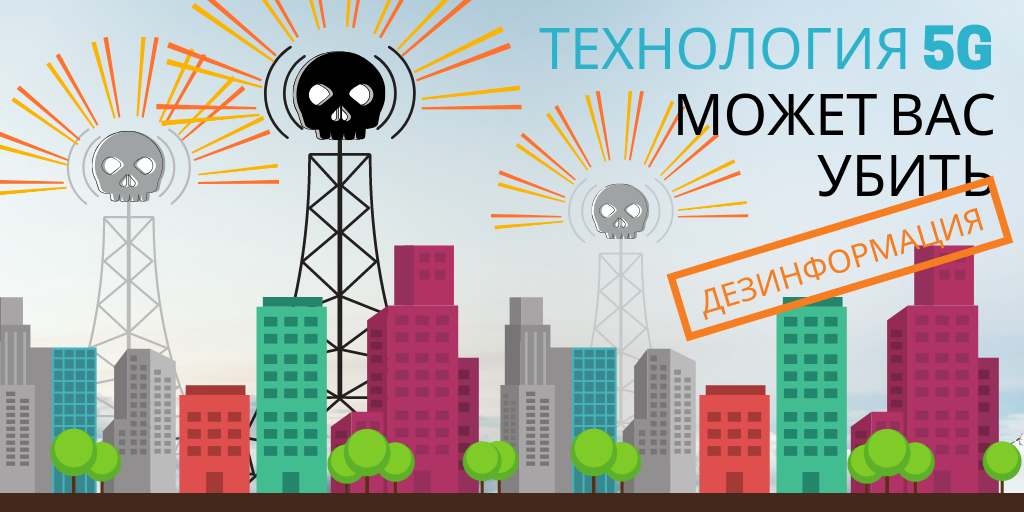 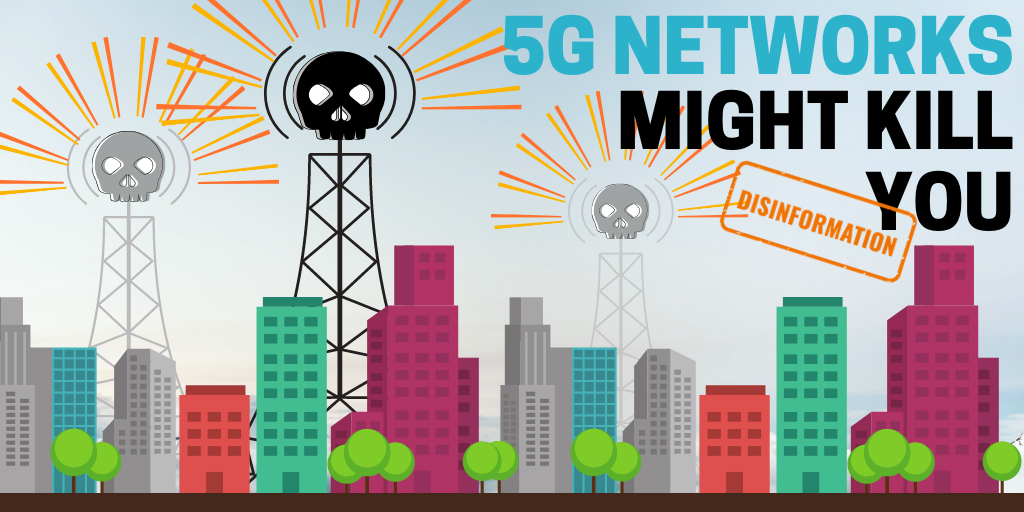 RT America, the US-based arm of Russia Today, has a public health announcement: 5G technology – the latest iteration of cellular technology, poised to bring remarkable increases in the speed and responsiveness of wireless networks – just might kill you.

As the New York Times reports, the RT segment, titled “A Dangerous ‘Experiment on Humanity’“, addresses the apparently “dire health threats” of 5G signals, linking the technology to an increased risk of a whole host of ailments, including brain cancer, infertility, autism, heart tumours and Alzheimer’s disease. Today’s 4G technology is already a public health hazard, RT tells us, allegedly causing DNA damage and cancer, among other things. 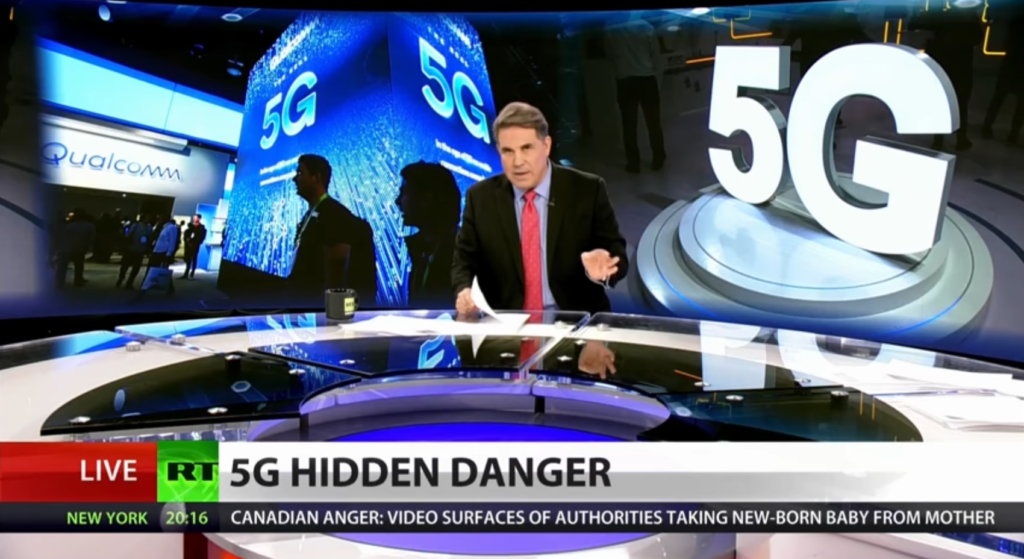 Yet these claims are utterly speculative and not grounded in any scientific consensus whatsoever. Existing research decisively contradicts the idea that wireless technology carries significant health risks. Limited studies examining a link between cell phone usage and increased cancer risk are inconclusive and full of caveats. Cancer Research UK, one of the world’s leading cancer research and awareness charities, says that current research “shows that it is unlikely mobile phones could increase the risk of brain tumours or other types of cancer”, but that we don’t yet know enough about the potential long-term effects. Meanwhile, the World Health Organisation says that “there should be no consequences for public health” with 5G technology, as long as adherence to international exposure guidelines is ensured. In fact, as the New York Times explains in its thorough exposé of RT’s 5G playbook, the higher radio frequencies used by 5G technology will actually make it less dangerous to biological organisms, including humans, because these frequencies are less able to penetrate the skin.

RT mentions none of this context. On the contrary, its report staunchly ignores the lack of scientific evidence and instead presents these menacing health claims as though they are factually established and supported by a serious professional consensus. The particular story in question is based solely on an obscure public appeal by a group of “scientists, doctors, environmental organizations and citizens” to stop the rollout 5G, which they ominously describe as “an experiment on humanity and the environment that is defined as a crime under international law.”

RT offers no further identifying information about the initiative or its signatories, but its coverage makes it sound high-profile and serious. Tracking down the original appeal required some effort, because no established news outlet appears to have reported on it. Importantly, this lack of attention doesn’t mean that the mainstream media is conspiring to “hide something” from the public, but rather that there is something fishy about the original story which does not meet the editorial criteria of reputable news agencies.

RT’s misrepresentation of the topic is further showcased in an “expert” video clip featuring the testimony of a certain Sharon Goldberg, MD, who serves on the advisory board of We Are The Evidence, a self-described “wireless technology injured advocacy group” whose About page reads like a conspiracy site:

“The harm of wireless technology radiation is not potential but existing at an epidemic scale. There are many thousands of peer-reviewed scientific research papers proving that the radiation emitted by wireless technology is harmful to almost every system and organ in the body – including DNA – even at levels millions of times less than the current “safety” standards.”

An online search of Sharon Goldberg yielded no independently verifiable information about her credentials – only links to several questionable alternative health sites quoting her warnings about 5G.

In the video, Goldberg says, “Wireless radiation has biological effects, period. This is no longer a subject for debate when you look at PubMed in the peer-reviewed literature. […] In humans, we have clear evidence of cancer now, there is no question.”

To anyone who has even passing familiarity with the nuanced process of scientific inquiry or academic research, such unqualified claims immediately raise alarm bells. It is difficult to imagine a well-informed and conscientious doctor or research scientist speaking with such certitude on a topic where professional consensus is lacking (or indeed points the other way).

Ironically, as the New York Times reports, RT’s fearmongering about 5G doesn’t reflect the Kremlin’s own position on the subject. On February 20th, President Putin ordered the launch of Russian 5G networks to great fanfare, announcing that “the challenge for the upcoming years is to organize universal access to high-speed internet, to start operation of the fifth-generation communication systems.”

Russia’s efforts to undermine public support for 5G technology in Western countries fit into the Kremlin’s broader subversion strategy to weaken the West by any means possible, and thus to level the playing field in order to increase Russia’s own competitive advantage. Hampering the West’s adoption of 5G networks, for example by hobbling democratic decision-making by inducing regulatory or legal battles about 5G’s adverse health effects, would be a boon for the Kremlin’s own pursuit of the technology.

Indeed, this particular RT segment is one of seven programmes already this year devoted to 5G fearmongering. The most recent, “Is 5G Hazardous to Our Health?”, alleges that children exposed to 5G signals will suffer cancer, nosebleeds, and learning disabilities. Another falsely says that higher radio frequencies are more dangerous to biological organisms, when in fact, as noted above, the opposite is true. As the New York Times explains, “The network is now applying its playbook against 5G by selectively reporting the most sensational claims, and by giving a few marginal opponents of wireless technology a conspicuous new forum.”

These stories have since taken on a life of their own in the anti-Western and pro-Kremlin alt-media, which often have a symbiotic relationship with Russian propaganda outlets like RT and Sputnik. Already, a cursory search for “5G dangerous experiment on humanity” brings up an extensive list of hits to dubious sites peddling iterations of RT’s original story, including many that EUvsDisinfo has previously identified as multipliers of pro-Kremlin disinformation.

That, folks, is how you feed the fever swamp.