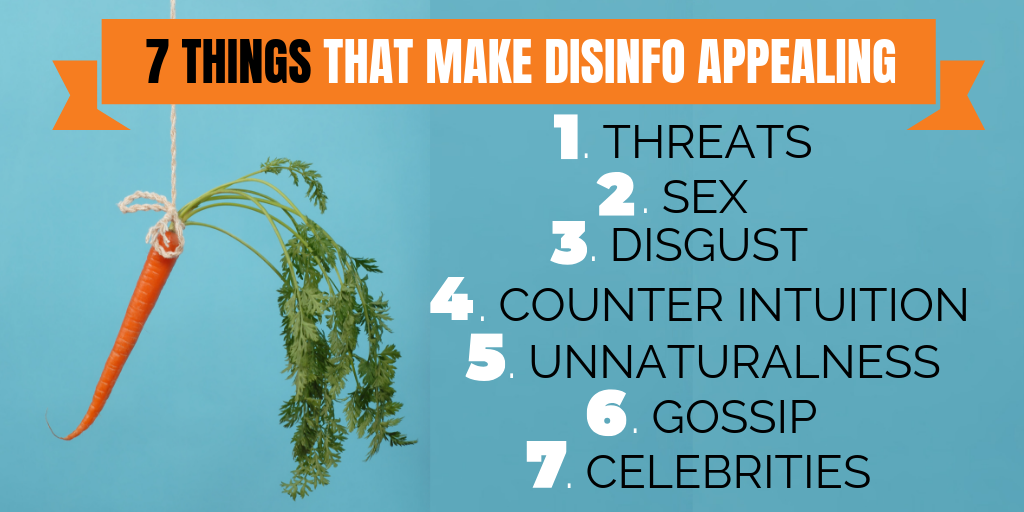 7 Factors which Make Disinformation Appealing to our Brain

Lies spread faster than truth, and the study by Eindhoven University of Technology suggests why.

The answer possibly lies in our brain and evolution of our cognitive preferences, which means that certain types of information are simply more appealing, attention-grabbing and memorable than others.

Unlike facts, disinformation is not constrained by reality and can be shaped in a way that makes it more attractive to us. Thus, the research argues, online disinformation can be seen not just as low-quality information that spreads because of deficiencies of the online communication, but as high-quality information that spreads because of its efficiency. Except that in this case “quality” does not refer to truthfulness, but to psychological appeal.

To illustrate this possibility, the researchers analysed the content of 260 articles published in outlets known for spreading hoaxes and misinformation. They looked for the presence of seven factors that were likely to increase the attractiveness of “suspect articles” to the online audiences and found that 86% of analysed articles contained them. The more extensive results, data, and methodology of this exploratory study are available online.

EUvsDisinfo decided to use the insights of this study to have a look at recent examples of pro-Kremlin disinformation for elements that might make them appealing to audiences. Here’s what we found:

Academic research suggests that people tend to share threat related rumours more than benefit related ones, even when the threats in question do not directly relate to them. Humans are also inclined to seek additional information about threats more often than about other topics. All of which can be explained by our evolutionary need to survive.

Pro-Kremlin disinformation heavily exploits the human need to anticipate danger and plays on our fears. Consider for example some of the most recurring disinformation narratives, such as the imminent start of World War III or Europe crumbling under the onslaught of migration and terrorism.

That “sex sells” is an old truth in the advertising industry, but apparently sex can also help the spread of disinformation. According to the researchers, sexual themes were present in almost every fifth examined “fake news” article.

Sexual topics aren’t taboo for pro-Kremlin disinformation, which claimed recently that Sweden will teach immigrants how to have sex with Swedish women.

We have also observed how the pro-Kremlin media combines sex-related information with narratives on migration threats (see no. 1), producing claims that the Germans and French are forced to apologise to their rapists, that the Swedish government gave orders not to investigate rape to protect immigrants and that British police ignores rapes of underage girls to avoid being called racist.

According to the study, disgust-bias is among the most-studied factors favouring the success of narratives. Popular urban legends, rumours, and children’s stories often have elements that elicit disgust. Such elements include information about contaminated food, diseases, mutilations, body products and “unnatural” sex acts, and the pro-Kremlin disinformation machine uses them generously. Remember the story of Danish brothel for zoophiles? There are also claims of European countries legalising necrophilia and bestiality, and ample examples of disinformation on highly gruesome biological weapons unleashed by the evil West on unsuspecting populations.

What makes certain fairy-tales and legends so popular? Apparently, it could be the “minimally counterintuitive content” – i.e., claims that partly contradict our intuitive expectations about the others. Normally such content is present in fictional stories about supernatural beings, who on the one hand act just like anyone else (for example get hungry or upset), but on the other hand possess unexpected qualities, like immortality or mind-reading. It is precisely such elements that make stories like Cinderella (or Twilight) so appealing.

When it comes to disinformation, though, the research indicates that such elements are relatively rare. Even disinformers strive to maintain some kind of credibility, and too much focus on the supernatural might be counterproductive. Nevertheless, pro-Kremlin disinformation managed to blame both aliens and satanic rituals for the Notre Dame fire.

Or what the researchers call “violations of essentialist beliefs”. To put it simply, essentialism is a view that every living being is defined by their essence, a set of attributes that define their identity and functions. Narratives that contradict the essence of beings – such as genetic modifications and clones – arguably become more memorable than those that don’t.

Pro-Kremlin disinformation has tried to scare its audiences with precisely these narratives, claiming that the US is sowing genetically modified crops in Ukraine to cause famine, or that the EU-USA free trade agreement would bring GMOs, chlorine purified chicken and cloned cows to the old continent. Such cases also illustrate that disinformation narratives may contain several factors that make them more interesting to us: chlorine purified chicken – isn’t that disgusting? (see no. 3).

Attractiveness Factors 6 and 7: Gossip and Celebrities.

Who doesn’t love some gossip, especially if it’s about someone we know or at least think we do? The study found that misinformation articles containing social information – gossip or celebrities were the most prevalent. Moreover, the majority of “celebrities” in the examined articles were in fact political figures, with actors, musicians and sport stars present only in 16% of them.

These trends are broadly applicable to the pro-Kremlin media as well. EUvsDisinfo has documented numerous disinformation cases about Ukrainian, European, and American politicians, including claims that the president of Ukraine is a part of Clinton-led global campaign against Trump; that all high-level politicians in the Baltic States are implicated in paedophilia, and accusations of late US senator John McCain supporting Daesh.

The pro-Kremlin media is also not shy to attack prominent figures outside of political circles, like Nobel Prize winning author Svetlana Alexievich, Ukrainian artist Jamala, and even the German rock band Rammstein.

The next time you come across a story that is just too good/bad/disgusting to be true, consider – that might indeed be the case.