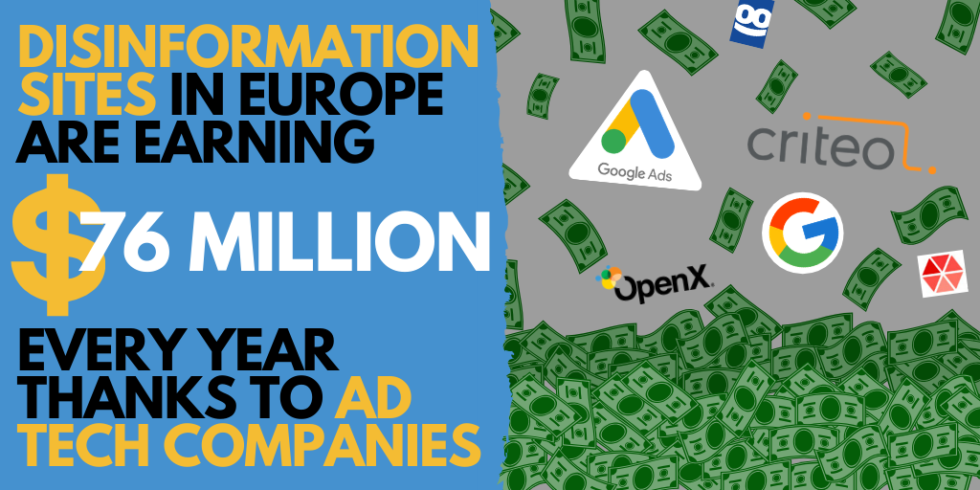 Advertisements for some of the best-known global brands are funding some of the most notorious disinformation sites in Europe – to the tune of US$76 million per year.

New research by the Global Disinformation Index has produced the findings, estimating that more than $76 million in ad revenues is inadvertently being spent annually on sites that spread disinformation by major corporations including Amazon Prime, Burger King, Mercedes Benz, Samsung, Spotify, and Volvo. Crucially, the placement of these ads is enabled by a number of equally prominent tech companies, with Google (Ad Services and DoubleClick) and Criteo leading the pack. These companies provide ads for each site based on each user’s online data footprint and geolocation.

In addition, other ad tech companies covered in the study include Amazon, Moneytizer, OpenX, Pubmatic, Revcontent, Rubicon Project, Taboola, Teads, The Trade Desk, Twitter, and Xandr. The share of each ad tech company’s advertising revenue and proportion of domains served is shown in the graph below. Five companies account for 97% of ad revenues paid to disinformation-spreading sites: Google, Criteo, OpenX, Taboola and Xandr. While precise estimates of online ad revenue are hard to make due to market opacity, GDI’s method focused on their lower bound, making these estimates conservative by comparison to other studies.

As part of the research, GDI compiled a map of these brand name ads across various known disinformation sites in Europe. The list of domains used in the study – which totalled almost 1,400 – was collected from several independent fact-checking sources as well as scraped from public lists that track disinformation in Europe, including the EUvsDisinfo database.

The sample encompassed foreign news sites that are known for spreading disinformation in Europe – such as the language and country variations of Russia Today, Sputnik News, and Epoch Times, among others – as well as domains in several European countries. The research specifically profiled eight national case studies: Bulgaria, the Czech Republic, France, Germany, Hungary, Italy, Slovakia, and Spain.

Based on its findings, GDI concludes that this widespread and indiscriminate placement of ads on disinformation sites is a violation of the EU’s Code of Practice on Disinformation, of which one goal is “to disrupt advertising and monetization incentives” for disinformation. GDI notes that Google as well as the Interactive Advertising Bureau (IAB) and the World Federation of Advertisers (WFA) are signatories of the Code of Practice and have voluntarily committed themselves to its implementation. While IAB counts among its members several of the ad tech companies identified as serving ads on the disinformation sites, the WFA represents a wide range of advertisers and brands, including many found in the present study.

Accordingly, the implication of this research is that ad tech companies as well as brands themselves are either unaware of or unwilling to reduce advertising placed on sites whose activities harm public debates in open societies. More must be done both by the advertising industry and brands themselves to prevent the monetisation of disinformation and related harmful content that threatens to undermine European democratic processes, civic cohesion, and public health.