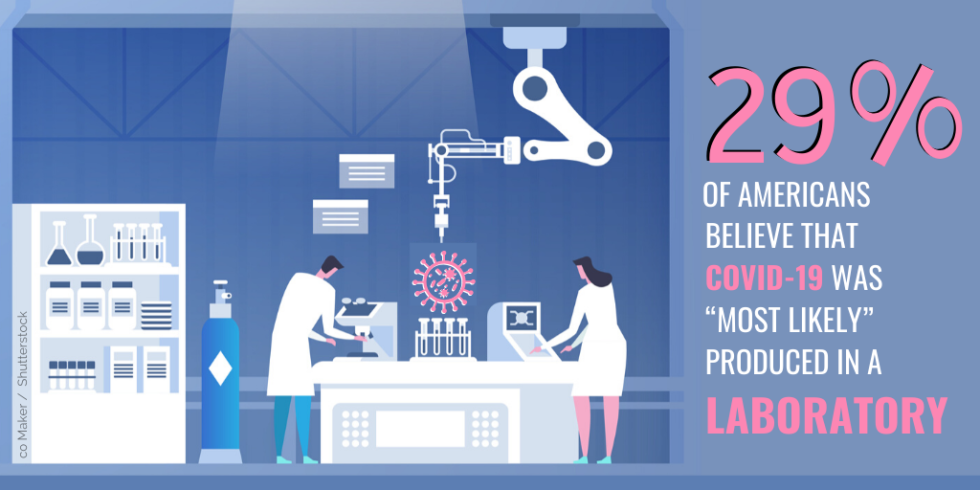 Coronavirus conspiracy theories are gaining traction with audiences: nearly three-in-ten Americans believe that COVID-19 was produced in a lab.

One of the enduring questions in the study of disinformation is whether it has an impact, and how that impact might be measured. Sometimes, all it takes is a simple public opinion poll to drive home an uncomfortable truth: yes, disinformation works.

In most cases, the effect of disinformation is not straightforward or top-down: usually it involves provoking doubt, uncertainty, or distrust – cognitive shifts that are hard for researchers to measure – rather than actively inducing people to believe a specific falsehood. But under the right conditions and with sufficient exposure, even the latter can happen. One recalls the old law of propaganda: a lie repeated often enough becomes the truth. This principle has been confirmed by psychological research: every time we encounter a given claim, our brains process it with greater ease – and it is that fluency which creates the perception of truth, even if the claim is false.

When it comes to the false notion that the coronavirus is man-made – a claim that has gone viral despite being thoroughly debunked by scientists – it appears that this principle of the “illusion of truth” holds fast.

A new survey by Pew Research Center, conducted from 10-16 March 2020, has found that nearly a third of Americans (29%) believe that COVID-19 was “most likely” produced in a laboratory. Of these, 23% believe that the virus was developed intentionally in a lab, while only 6% believe that it happened accidentally.

Meanwhile, only 43% of respondents said that the virus most likely came about naturally – which is the expert scientific consensus – and a further 25% expressed uncertainty about its origins.

While this survey is limited to the US, it merits concern about the impact of corona-related disinformation on other audiences too. The question of the genesis of the coronavirus has proved to be exceptionally fertile ground for conspiracy theories and speculation around the world, with mis- and disinformation on the topic coming from a wide variety of different sources in different countries. For example, Chinese officials shared the conspiracy theory that the coronavirus was brought to Wuhan by the US military, while in the UK, a conspiracy theory linking the coronavirus to 5G resulted in arson attacks and vandalism of several cellphone towers.

Pro-Kremlin outlets have also played a not insignificant role in propagating numerous conspiracy theories and disinformation about the origins of the virus. As we wrote last week, the largest share of corona-related cases in the EUvsDisinfo database involves some variation of the claim that the United States manufactured and weaponised COVID-19. In terms of social media engagement, the most popular disinformation articles from pro-Kremlin sites, including RT and Sputnik, claimed that the coronavirus is a biological weapon created artificially, that the US is behind its spread, and that the virus originates in US labs and targets America’s opponents.