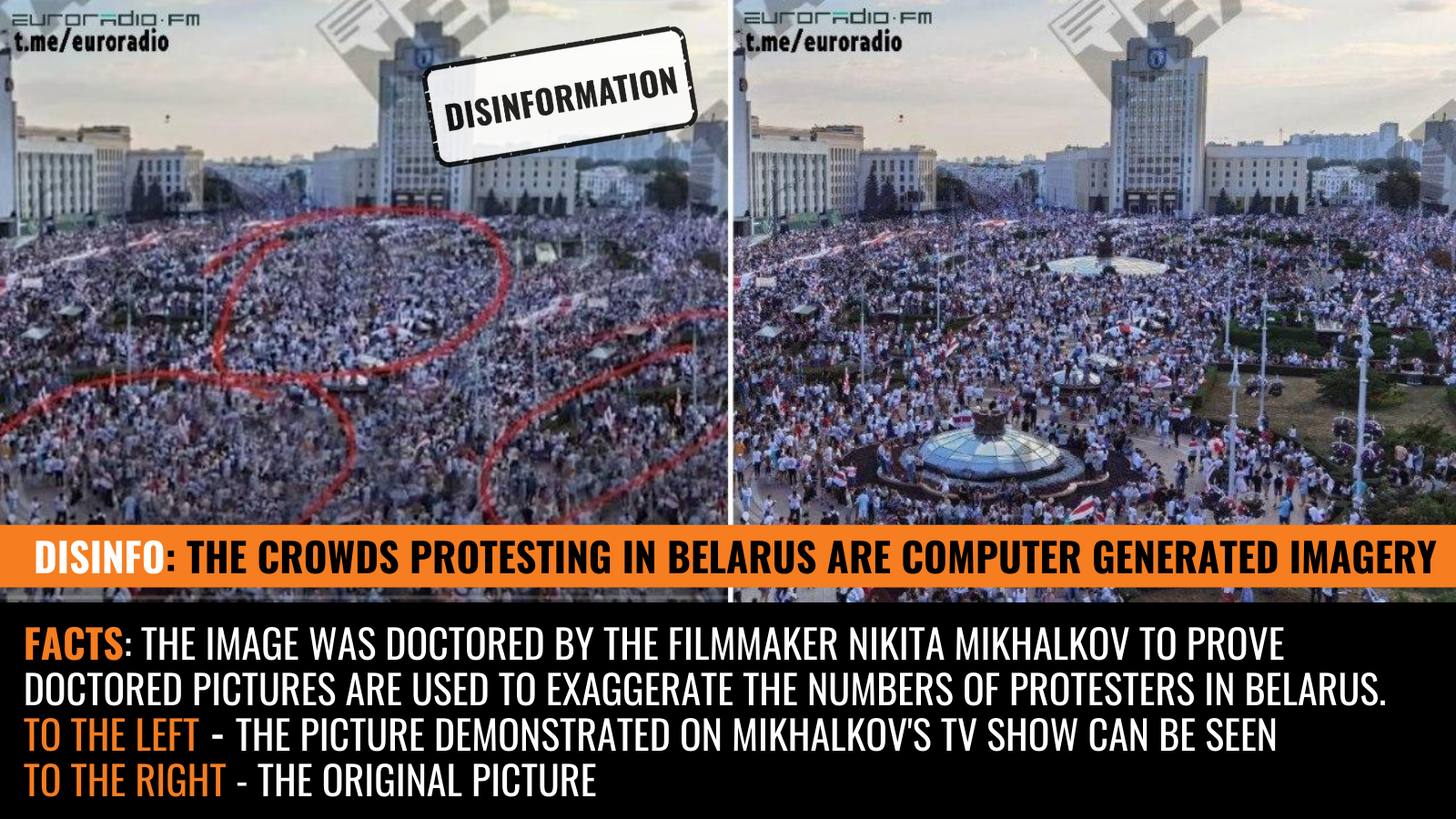 It’s fake, fake, fake! Filmmaker Nikita Mikhalkov did not leave his audience in any doubt when demonstrating that the vast crowds of protesters in Belarus were nothing but computer generated imagery. The pictures, allegedly showing “oceans of people” were doctored – “trust me”, Mikhalkov said, “I’m a professional”.

No one can doubt Mr Mikhalkov’s professionalism. He is certainly one of Russia’s most internationally acknowledged film professionals. He has an impressive oeuvre; since his mid-70s debut, his films have earned prizes at international film-festivals in Cannes, Venice and Berlin. In 1995, he won an Oscar for Burned by the Sun; a story set in the Stalin era, where he himself stars in the leading role as a Soviet officer falling out of grace with Kremlin rulers. A great work of art; a great piece of fiction.

Mikhalkov continues to excel in the field of storytelling and is hosting a YouTube show called “Besogon” – the title alludes to driving out demons. September 28, the Russian church celebrates a 4th century saint called Nikita Besogon (In Western tradition – Nicetas the Goth). Mr Mikhalkov has registered the icon of Nikita Besogon as a trademark.

Mikhalkov’s TV-show used to be aired on Russian state TV, but was cancelled when the host went a little too far, broadcasting anti-vaxxer conspiracy theories and claiming that billionaire Bill Gates might be seeking to implant humanity with microchips under the guise of vaccination. Bang, and the show went off the air. After all, Russia is investing a lot in promoting a COVID-19 vaccine to the world market. Lying is fine, spreading conspiracy theories – no problem… but hurting potential profits – there’s where the Kremlin draws a line.

Undeterred, Mikhalkov has continued with his show, now on YouTube, and its broadcast of 12 September was devoted to the situation in Belarus. Mr Mikhalkov’s position is staunchly pro-Lukhashenka.

He saved the country. He really saved the country… He came, powerful, young, charismatic. I’ve seen Belarus and its villages with paved streets, with functioning electric light everywhere… A wonderful impression of enormous well-being…

Mikhalkov shows pictures of nice, tidy villages, hinting that only Alyaksandr Lukashenka is able to furnish the Belarusian countryside with paved streets and electricity. How can anyone be unhappy if there is electricity? Mikhalkov suggests that not many Belarusians are protesting, despite pictures of large crowds:

Look at those pictures. An ocean of people! But look, look at the distances between the people in the picture! It is impossible that such a crowd could have such distances between peoples’ legs. There should be no space at all. First row, second, third… This is obviously computer graphics. And here is an even more clear example: Independence Square in Minsk. This is how it looks in “peacetime”. And look here how full it is during a demonstration: See how even the glass cupola of the fountain is covered with people. This is impossible! It’s fake, fake! “Good enough, have it like that! The people will stomach it!”

Mikhalkov demonstrates pedagogically doctored pictures, and he is not lying. The picture from Independence Square in Minsk is certainly doctored. And with a visible logotype from the opposition NEXTA channel. Fake! Fake!

Only issue – the NEXTA telegram channel did not broadcast the fake picture; the Mikhalkov show did. And, not very professionally, one must say. The forgery was revealed by Russian journalists, comparing the original picture published by NEXTA, and the one presented – quite correctly – as doctored by Oscar-winner Mikhalkov.

Fiction in art can be something beautiful, and fiction can convey truth. But, no Oscars will ever be won for lies and forgeries.