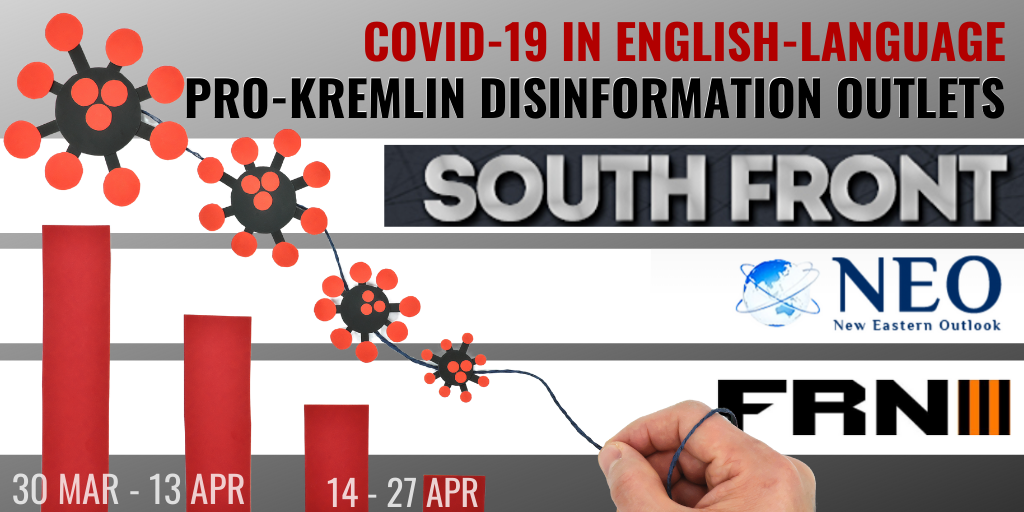 Are Pro-Kremlin Disinformation Outlets Disenchanted with the Coronavirus?

The COVID-19 outbreak is still the dominating topic in the pro-Kremlin disinformation ecosystem, and the outbreak itself continues to be a serious issue to handle for health care workers, national and European systems, and international bodies. Many of the “usual” examples of disinformation are employed this week, just as previous weeks: The virus is man-made; it is a biological weapon; it is the Global Elites’ scheme to reduce the world’s populationand the World Health Organisation is part of it! Most of these tropes have been repeated over and over again since the start of the outbreak in January. This week, the number of cases devoted to the coronavirus passes 400.

Several disinformation cases on the pandemic claim that the EU passively stood by as the crisis struck. We see such examples here, here and here. The outbreak was certainly a serious challenge to European crisis management. In hindsight, it is obvious that more could have been done. EU Commission President Ursula von der Leyen offered an apology on behalf of the Union for the shortcomings of the initial response. At the same time, she said that she is proud to be a European while witnessing the solidarity and empathy with which EU citizens are supporting each other during the pandemic. The democratic system heeds criticism and strives to improve, and the EU, in concert with national authorities and international bodies, is addressing the outbreak by utilising national and European resources.

A separate set of tropes, indirectly connected to the COVID-19 outbreak, claims that the West (alternatively the US or NATO) is setting up secret and dangerous laboratories far away from US soil, in Moldova, in Georgia, in Ukraine. The Robert Lugar Laboratory in Tbilisi has been a target for pro-Kremlin disinformation since 2018; this week too. This week we tracked claims that the novel coronavirus was developed in one of these laboratories in Ukraine. Earlier, similar claims pointed at China, Britain and… Latvia.

Several countries note that the epidemic is beginning to recede. Governments have started discussing a cautious loosening of quarantine restrictions. The curve is flattening. And we can see a similar development in the pro-Kremlin disinformation network. The subject is no longer as conducive for disinformation: European national healthcare systems have managed to operate through the crisis; cooperation within the European Union is deepening.

Studying a few English-language pro-Kremlin disinformation outlets demonstrates this trend. We observe a peak in the reporting on the COVID-19 outbreak in late March and early April, while Russia still had a relatively small number of cases. In this period, we saw several cases suggesting Russia’s measures are more efficient or the “authoritarian system” better designed to cope with a crisis. None of this can be claimed anymore, and since the second half of April, we have observed a distinct decline in articles of known pro-Kremlin English-language outlets. We used Brandwatch, an online and social media monitoring tool, to search the keywords “COVID-19” and “Coronavirus” on three pro-Kremlin disinformation outlets: New Eastern Outlook,South Front and Fort Russ News. The three outlets, all targeting an international audience, are frequently represented in the disinformation database. Since mid-January to 28 April, the keywords have appeared 261 times.

South Front is a Russia-based site with a strong focus on military, security issues, and war. 10 April, when we observe a peak in reporting on the COVID-19 outbreak, the site even had a designated button to direct the audience to content on the pandemic:

As of 28 April, that button is gone, as is the intense reporting on the outbreak.

It is likely that the COVID-19 outbreak will continue to dominate both in professional news reporting and in the content of disinformation outlets, but it appears that the topic is starting to become less comfortable as a vessel for pro-Kremlin disinformation.

We can already see some “old” tropes returning. We have a first case for a few weeks on theMH17 trial, claiming that the investigators have tampered with the evidence to hide an on-board explosion. The old lie about the Crimean “referendum”, the pretext for the illegal annexation, is repeated again. “Ukraine is not a real state” – again. And Nazism is looming in the West, again; and Western values have collapsed. Again.

Weirdest Cases of the Week