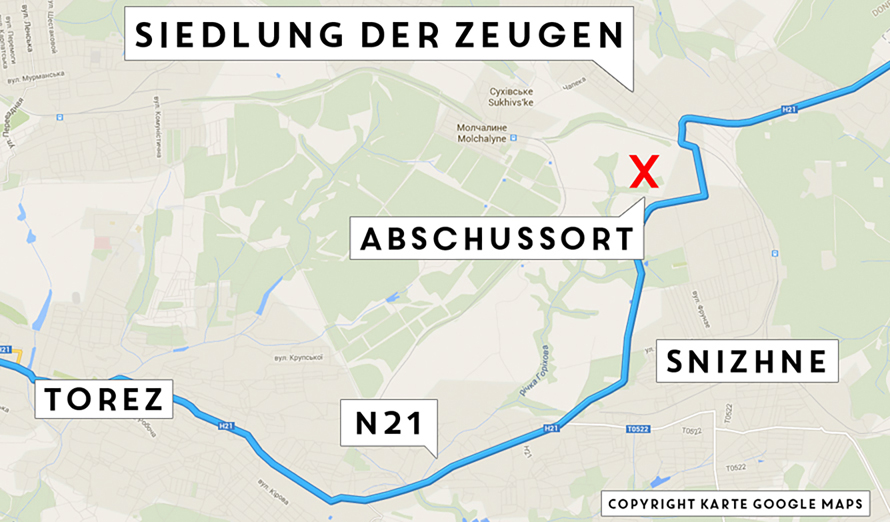 It’s one of the greatest war crimes of modern times – and the truth still hasn’t been told. On July 17th 2014 at about 16:20 local time, Malaysia Airlines flight MH17 was shot down over eastern Ukraine. All 298 passengers died, including many children. Who fired the missile?

Over several months the Berlin-based investigative newsroom CORRECT!V has gathered facts, investigated in eastern Ukraine and Russia, and found witnesses to the missile launch.

The investigation unveiled a clear chain of evidence. MH17 was downed by a ground-launched BUK missile – launched by a unit of the 53rd Russian Air Defense Brigade from Kursk. The brigade unit, tasked with protecting Russian tank units, was operating in mid July on Ukrainian territory without displaying national emblems.

THE KEY QUESTION IS WHY
Few people know more about the air-combat-weapon systems of the former Eastern Bloc than Rupert Smid. He is a leading expert on air combat. Throughout our investigation we met him as part of our reporting in several countries including the Ukraine, Russia, Austria and the Netherlands. His name is not really Smid – but he can’t reveal his true identity. He works for an organization that does not want to be involved in this issue. We can only assure you that Rupert Smid is a leading expert on Russian air combat systems.

Smid tells us: “There is no doubt: flight MH17 was shot down by a missile. And this missile was fired from the ground and not from a fighter jet.”

Smid’s information is confirmed by Harry Horlings, a former Dutch fighter pilot, who was trained by the U.S. Air Force. Only a rocket fired from the ground has the explosive power displayed in the destruction of MH17, Horlings says.

These experts say, fighter pilots would attack a hostile airplane from the tail and not from the front. The back of the plane is the blind spot. Moreover, flight MH17 was approaching Russian airspace; it was shot down around 40 kilometers from the border. “An attack plane at this altitude and velocity would have to be coming from Russian airspace,” says the air combat expert Horlings.
A ground-to-air missile is programmed to explode just in front of and above the targeted airplane, says Smid. The plane then flies through a cloud of deadly shrapnel. And that’s just what the Dutch investigators described. They said “objects with high energy that penetrated the airplane from the front and above.”

And if it was a surface-to-air missile, officials from Russia and the U.S. say, it was a BUK M1, an airplane killer developed by the Soviets. The BUK M1 is highly mobile – and can shoot down airplanes at high altitudes with great precision. It can easily reach 15 kilometers of altitude, approaching its target at three times the speed of sound. The warhead contains 70 kilograms of explosives. Just before impact it explodes into thousands of pieces of sharp shrapnel – “objects with high energy”.

A BUK-unit consists of four subunits which are often positioned kilometers apart: a missile launch pad mounted on a tank; a radar car from which soldiers search the sky for targets; a commando vehicle from which officers give the command to fire. And a supply vehicle carries additional missiles. The subunits operate separately – and the radar and commando cars do not move with the BUK launch pad. On flat ground they can be positioned up to 30 kilometers apart, says the air combat expert Smid.

Another significant point is that the BUK M1 system acquires its targets with an active radar: radar waves are transmitted into the sky, the enemy is acquired through the returning echo. But the active radar places the BUK team in danger. The pilot of the enemy fighter jet knows when he has been spotted. Smid: “As soon as a BUK’s radar is opened, an alarm light flashes in the cockpit that fighter pilots refer to as the ‘Oh shit lamp.’”

The pilot immediately has all necessary information about the missile type and position. The BUK team operating the radar is aware of this risk. A deadly duel ensues: shoot first and survive.

“Every second when the radar is on is life-threatening,” confirms a former BUK operator from the Ukrainian army in Kiev. For that reason, the radar is only active for up to 40 seconds during attack.

Complicating things even more, the BUK’s active radar cannot identify the type of airplane targeted. Fighter jet? Passenger plane? It is difficult for missile operators to tell. They can only determine whether a friend or foe is approaching. Friends are airplanes of their own air force. All other aircraft are enemies. Civilian planes such as MH17 are tagged as enemies. “If the plane doesn’t respond to the friend-foe query, or sends the wrong response code, then the air defense team will treat the aircraft as if it is an enemy aircraft,” Horlings said.

The inherent poor design of the Soviet air defense system has had fatal consequences in the past. In 2001 a misfired BUK caused a catastrophe. The Ukrainian forces mistakenly shot down a Russian civilian plane near Crimea during a military exercise. All 78 passengers on board the Tupolev died. The Ukrainian Security Council admitted its forces shot down the plane and took action: the Ukraine mothballed all its BUKs for ten years.

Now we turn to the issue of tanks – and the irresponsible carelessness of the airlines. The BUK guided missile system has a clear tactical function – to protect tanks and ground troops. “Russian tank units only move when they are accompanied by BUKs,” says Rupert Smid, the air combat specialist. “Without missile protection such vehicles are easy targets for fighter jets.” This is a military fact-of-life for military commanders in all NATO states.

Mobile air defense systems are always found in the vicinity of tanks, confirms a German army spokesman. But the German Defense Ministry refused a request for an in-depth interview. Anyone who knows that Russian tanks are accompanied by BUKs – which in turn create a threat for civilian airplanes — might face questions about why they didn’t issue a warning.

In an email a German Defense Ministry spokesman cites a statement that the Federal Government submitted in response to parliamentary questions in August 2014: “The Federal Government could not assume that civilian air traffic at the given altitude would be targeted in attacks.”

Were there tanks in eastern Ukraine?

Yes – on June 13th, around a month before MH17 was shot down, the US State Department said Russian tank units crossed the border to the Ukraine and were sighted in the eastern Ukrainian town of Snizhne. NATO also published photographs of tanks without national markings in this eastern Ukrainian town. Russia denies the deployment.

In the following weeks the war escalated. Ukrainian fighter jets and helicopters attacked tanks in the separatists’ territory, with success: the pro-Russian separatists were pushed back.