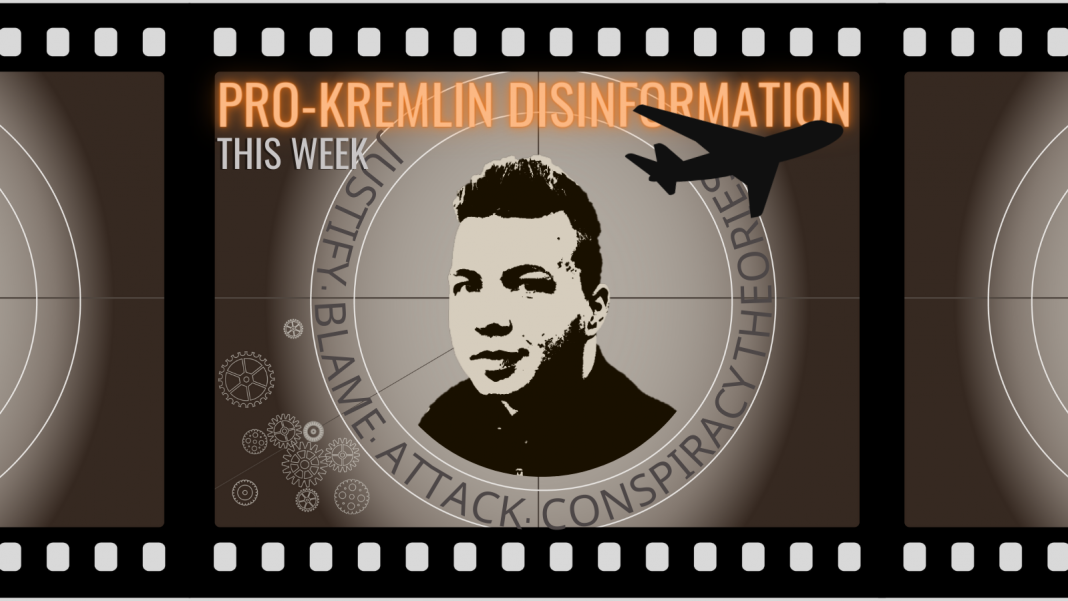 This week, the disinformation narratives regarding the forced landing of flight FR4978 were still skyrocketing.

Some narratives were repetitive. According to pro-Kremlin media, Belarus offered the Ryanair plane to land at Minsk airport after a bomb threat. The bomb threat was already debunked two weeks ago, on several grounds. For example, the email with the purported threat was received after Minsk air control reached out to the pilots and, painfully, for Belarus, Hamas denied sending it.

Also, just like in the last weeks, we spotted claims that the Ryanair case shows the West’s hypocrisy. A similar complaint by pro-Kremlin media is that the West protested about the arrest of Pratasevich, but the incident is similar to the one with Evo Morales. Unlike the Belarusian plot however, which involved fighter jets and bomb threats, the Bolivian president’s flight was brought down by bureaucracy: European nations refused it permission to enter their airspace. For more debunking: see this case.

This week brought also new theories. For example, the claim that the investigation of the International Civil Aviation Organization into the Ryanair flight incident was questionable because of the UN’s bias. Also new: the idea that the Ryanair flight incident could be a provocation from the UK. Among the reasons supporting this theory were a few remarkable ones: 1 ) FR4978 departed from Greece and Greece is in the sphere of influence of the British secret service, 2) The Nexta Telegram channel, which Mr Pratasevich ran, is located in Poland and the Polish secret services are controlled by the US secret services, which also use the UK as a satellite and 3) Ryanair is an Irish company. Quod erat demonstrandum. Everything irrefutably leads to London.

As we pointed out last week, many of these narratives remind us of disinformation campaigns following the poisoning and arrest of Russian opposition politician Alexei Navalny, when pro-Kremlin outlets started to claim that this blatant act of state-sponsored piracy was in fact a provocation against Belarus and that Western secret services were involved in it.

The goal of forcing the plane down was to capture Raman Pratasevich. Similar to the disinformation campaigns smearing opposition politician Alexei Navalny, are the outrageous claims regarding this Belarusian journalist. Just a few of this week’s examples:

The West is using Pratasevich as a weapon against Lukashenka. Conspiracy theory. Similar to: Navalny is used as an instrument against Russia. Both Pratasevich and Navalny are instrumentalised.

Pratasevich practiced shooting on unarmed Donbas civilians. Smearing. Similar to: Navalny called for killing Chechens like cockroaches. Both narratives aim to undermine the credibility of Pratasevich and Navalny and imply crimes they never committed.

Lukashenka had the right to arrest Pratasevich. Legal magical realism. Similar to: the ECHR confirmed Navalny’s prosecution was not politically motivated. In both narratives, legal reasoning is conjured up out of thin air.

It is The West, who else?

If there is turbulence in the world, the pro-Kremlin media’s standard response is to blame Western powers, ranging from institutions such as the EU and NATO to vaguer entities like the “Global Elite” or the “Anglo-Saxons”.

For instance, one interpretation of the forced landing is that the EU is showing its imperial desires by calling for an overthrow in Belarus. We spotted similar claims that the EU is trying to buy out Belarus and the EU is a danger to peace and unity on the European continent.

It is not just the EU that has imperial desires. According to a claim we spotted, NATO broke agreements with Russia and has a hostile plan against Belarus. Related to this claim is the story that approaching the Russian border is one of NATO’s gross violations of its own commitments. In a similar fashion, another narrative claims that Russia is reacting to provocative behaviour from the West.

From a cold war perspective, both nostalgic and obsolete, the driving force behind the West is still the US. Consistent with this perspective is the false claim we spotted that the US overthrew the legitimate government in Ukraine and wants to do the same for Russia, China and Hungary. Similar is the claim that the US controls Europe and Ukraine and does not allow Ukraine to live in peace with Russia.

About Ukraine. According to one claim, this country is used as an instrument to fight against Russia and weaken the EU. Somehow forgotten here was that Russia illegally annexed Crimea. Talking about instrumentalising. We spotted the same forgetfulness in a complaint about the jersey of the national football team of Ukraine. Their shirt is emblazoned with its borders, including Crimea. In the eyes of the pro-Kremlin media however, it features a fascist slogan. There can be no question that the Ukraine jersey is correct; Crimea is Ukraine and almost no one recognises it as Russian. Moreover, no international body recognises the so-called referendum in Crimea, often invoked by pro-Kremlin media, not the UN, nor the EU.

Pro-Kremlin media are not afraid of employing contradicting narratives: It was the right thing to do! It was justified! The blame is on the West!