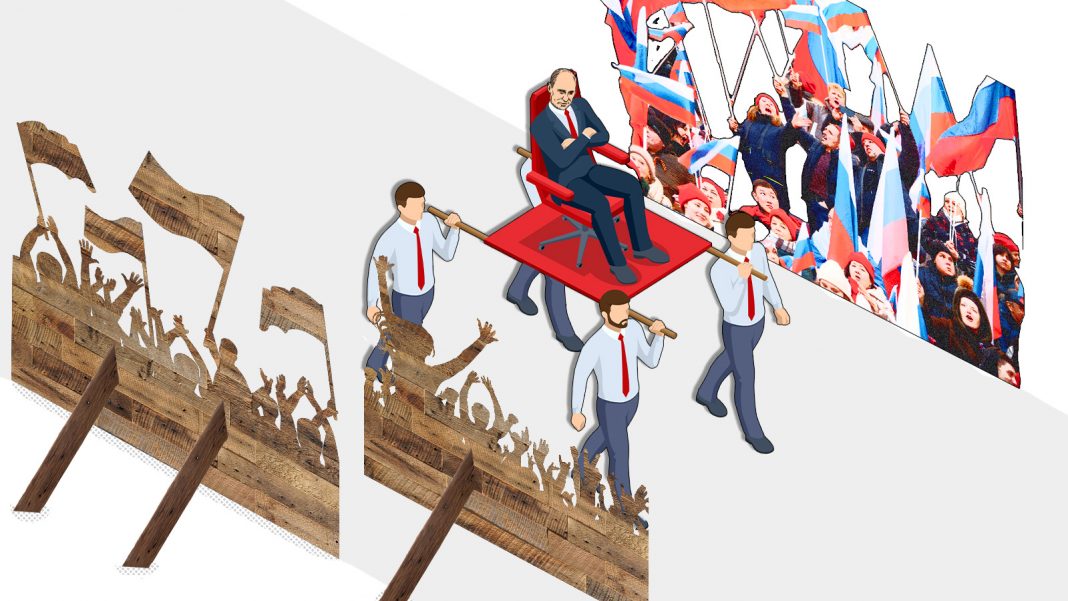 At a pro-war rally in Moscow, tens of thousands of Muscovites were bribed or forced to demonstrate unity behind the leader.

Russia’s President Vladimir Putin made a rare public appearance at a pro-war rally at the Luzhniki stadium in Moscow on Friday, 18 March. The event featured flying banners saying “For a world without Nazism”, “For the President”, “For peace”, and so on.

Putin praised Russia’s armed forces and its soldiers who show readiness to die for their comrades. Mr. Putin quoted the gospel:

Greater love has no one than this: to lay down one’s life for one’s friends.

Currently, according to leaked figures from the Russian Ministry of Defence, almost 10,000 Russian soldiers have lost their lives as aggressors, meeting fierce and competent resistance from Ukrainians who are defending their country.

Putin insists on calling the war a “special military operation” intended to “de-Nazify and de-militarise Ukraine”, and the rally on Friday was ironically branded a call “for peace”. Tens of thousands in a cheering crowd shouted their support of Putin’s violent “peace efforts” and calls for liberating Ukraine from freedom, independence and sovereignty.

The question of how much popular support exists in Russia for Putin’s war is much debated. Several polls indicate that a majority of responders support the war. The state polling institute VTsIOM gives the number of 71 per cent in support of the “military operation”. At the same time, as the repression in Russia seriously tightens up, the readiness to express dissent from key state policies – and wars – might dwindle. Russians have a history of keeping their cards close to their chests in any contact with the authorities.

The crowd cheering the war at the Luzhniki stadium might also not be as cheerful as demonstrated on the national broadcaster. Several outlets, report that several attendees were brought to the event either with bribes or threats. The BBC quotes an anonymous participant:

I was herded like a sheep. I work in a state institution. Everyone here, all hundred thousand, are the same. Do you really think anyone would come here in such cold weather of their free will? Of course not. I want to keep my job, that’s why I attended.

The broadcast was carefully scrutinised in Ukraine, internationally and, of course, in Russia. Putin’s speech was interrupted unexpectedly, before he finished – allegedly as the crowd started whistling in discontent when the President talked about the soldiers’ readiness to sacrifice themselves.

The event is the latest in a series of speeches by Vladimir Putin beginning on 21 February in which he declared his intention to recognise the “peoples’ republics of Donbas”, culminating on 24 February with the declaration of the start of the “military operation” and a speech on 16 March expressing unity and the need to purge Russia from domestic enemies:

[The West] will try to influence the so-called fifth column, the betrayers of the nation, those who earn money here but live there; not even geographically “living” there, but in their mindset, their slave-like submission. I am not going to condemn those who have a villa in Miami or on the French Riviera, those who cannot live without foie gras or so-called gender freedom. /—/ They consider themselves members of the highest caste, the highest race.

One detail of Putin’s rhetoric in this series of speeches is the term he uses to describe domestic enemies. Putin has distanced himself from the familiar Soviet expression “enemy of the people” and is using the term “betrayer of the nation”, which, according to historians, is borrowed from the German Volksverräter. It is noteworthy that Putin already used the term “national traitor” in his 2014 speech to the Federal Assembly after Russia illegally annexed Crimea. State media outlets followed suit immediately.

To the average Russian, “national traitor” or “enemy of the people” may not make a big difference. People know well how these tropes worked in the USSR when the cult of personality developed: you are outside the tolerated domain. Consequences, repressive measures will follow.

The destruction, death and devastation caused by the Russian military’s attacks in Ukraine are mounting. The UN is reporting large numbers of civilians casualties, and millions of Ukrainians are displaced internally or have taken refuge abroad. While Putin’s Russian army is killing its way ahead in Ukraine, Putin’s police and repressive machine are crushing all dissent in Russia. Alexei Venediktov, editor-in-chief of the closed-down and dissolved independent radio station Ekho Moskvy, summarises the last few weeks as a completion of Russia’s path to totalitarianism.

The transformation started around 2012-2013 and is soon complete. The main difference between the fully developed totalitarianism and the developing one is the disappearance of zones of comfortable non-participation in the crimes of the government. In the new conditions, there will be a demand of full inclusion into the circles of total submission. Either you think as everyone else, or you will be sought out and crushed.

Putin is giving the Russians an option: salute the war or be crushed as a traitor.