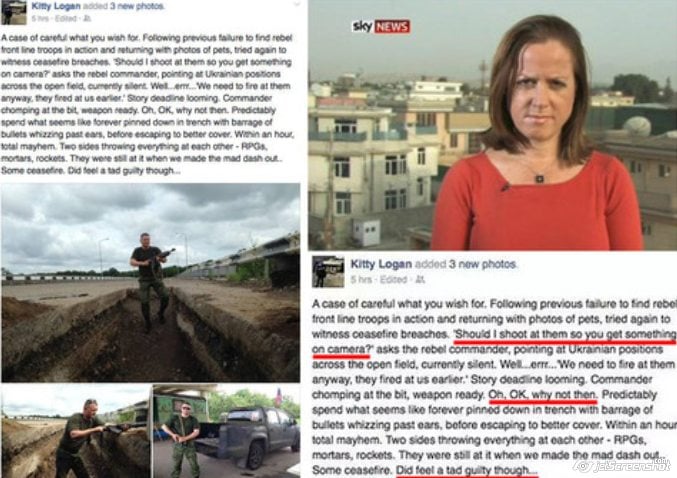 Kitty Logan was covering events in war-torn Eastern Ukraine for Deutsche Welle. Her reports didn’t garner much attention, but one of her Facebook posts changed everything. Kitty wrote: “Following previous failure to find rebel front line troops in action and returning with photos of pets, tried again to witness ceasefire breaches. ‘Should I shoot at them so you get something on camera?’ asks the rebel commander, pointing at Ukrainian positions across the open field, currently silent… Well, errr… Story deadline looming… Oh, OK, why not then… Within an hour, total mayhem. Two sides throwing everything at each other – RPGs, mortars, rockets. They were still at it when we made the mad dash out.. Some ceasefire. Did feel a tad guilty though.”

Deutsche Welle posted Kitty’s video report on June 30, 2015. In her narration, she said: “The soldiers claim that Ukrainians fired first,” even though that claim didn’t comport with what she personally witnessed. In fact, the only reason Ms. Logan didn’t end up with more “photos of pets” instead of action on the frontlines is her encouragement of ceasefire violations, which she later bemoaned in her video narration. What Kitty described as a situation evolving into “total mayhem” was also noted by the Organization for Security and Co-operation in Europe (OSCE). In its report, OSCE noted: “The fighting at and around Donetsk airport continued with increased intensity compared to the previous few days… Between 12:45 and 16:53hrs, the SMM heard 96 incoming and outgoing explosions from mortar, anti-grenade launcher, bursts of heavy machine gun and small arms fire, and saw 21 airbursts of 82mm mortars at a distance between 2.5-7km of the SMM position in directions west, north-west, north-north-west, north-east, and north.” The timing and location of these events comport with Kitty Logan’s report, describing the location as “the rebel front line near Yasynuvata, not far from the strongly-contested area surrounding Donetsk airport.”

The hero of Kitty’s report, Sergei, is a Russian citizen, who grew up in Kazakhstan and lived in Germany for 25 years. He came to Ukraine because “he feels it is his patriotic duty to fight.” As a foreign operator in Ukraine, the terrorist nonetheless believes that he is owed something by the Ukrainian government. He tells Kitty: “Maybe (Ukrainian President) Poroshenko will reconsider and leave us in peace. We don’t want to continue with the bloodshed. But if he [Poroshenko] doesn’t want that and won’t listen to us, then we’ll carry on fighting. And we’ll take what belongs to us… we’re going further. We’re advancing. That’s our land.” Sergei tells Kitty that he will keep on fighting in Ukraine and will return to Germany once the hostilities are over. These apparent contradictions didn’t seem to bother Kitty Logan, but her participation in encouraging ceasefire violations didn’t go unnoticed.

On July 31, 2015, Kitty Logan’s journalistic accreditation was revoked by Ukrainian authorities. They’re also contemplating banning Ms. Logan from returning to Ukraine. In her initial responses, Kitty complained that the setting on her Facebook posting was supposed to be private. Ms. Logan protested: “Note to all using photos + content taken from private Facebook page without permission: you don’t have copyright to use these in any form.” She did not deny the authenticity of her narrative, but claimed that it was being interpreted “out of context.”

In response to further media inquiries, Kitty Logan wrote: “I’m not in Ukraine and unaware. Rumours/ allegations not correct.” Deutsche Welle did not respond to requests for comments. According to Kitty Logan’s LinkedIn profile, she no longer works for Deutsche Welle.

By Julia Davis, The Examiner