“Brothels for zoophiles have existed for a long time in Copenhagen. Local animal rights defenders, whose voices, however, are almost never heard, have told me that the animals are put in special machines and even have their limbs broken so that they cannot harm those who enjoy such unusual pleasures”.

The paragraph quoted above was part of a longer piece describing different aspects of the alleged perversion of traditional values in the West, published in December by RIA Novosti, a state-owned Russian news agency.

Before looking at the developments that have let RIA Novosti to the point when it publishes articles of this kind, let’s turn the discussion around and ask if there are any mitigating circumstances in RIA’s story. Is there anything that prevents us from concluding that RIA, which used to enjoy international respect for accuracy and unbiased, timely reporting, has simply sold out and become an anti-Western propaganda outlet?

Is an undocumented claim an “opinion”?

The incorrect notion that Denmark tolerates zoophilia – people having sex with animals – is not new to the pro-Kremlin narrative. As we reported in September, it has a history among marginal outlets in Russia, Georgia and other countries. In Russia, the narrative can also be traced back to a news item broadcast by the state-controlled TV station NTV in October 2013, in which it was claimed that Denmark had become a destination of international animal sex tourism.

This image was used as illustration of a similar story about alleged animal brothels in Denmark, published by a marginal Russian outlet, as we reported in September. (Image: Screenshot from Kolokol Rossii)

However, RIA’s story does not go as far as to claim that Denmark has legalised animal brothels; the author simply brings forward a rumour about cruelty to animals, which she claims to have heard from a friend.

RIA’s piece is also not presented as a news item; instead, it is published in a section headlined “Opinion”. It could be argued that this frame introduces an element of deniability for RIA, so that, if asked, the news agency can simply say that the claim is the author’s, and in no way RIA’s.

But can an undocumented and, mildly speaking, controversial claim be considered “an opinion”? And will those employees at RIA who want to enjoy recognition for their journalistic work, appreciate this kind of text appearing on RIA’s website?

The newswire agency RIA Novosti, or simply “RIA”, is part of the state-owned media house “Rossiya Segodnya”. RIA works in the same building as one of the Kremlin’s international flagship propaganda outlets, Sputnik, and has the same Director General as Sputnik, the EU-sanctioned Dmitry Kiselev (see top photo). The agency has a wide network of correspondents across the globe, including reporters accredited at the EU institutions in Brussels. 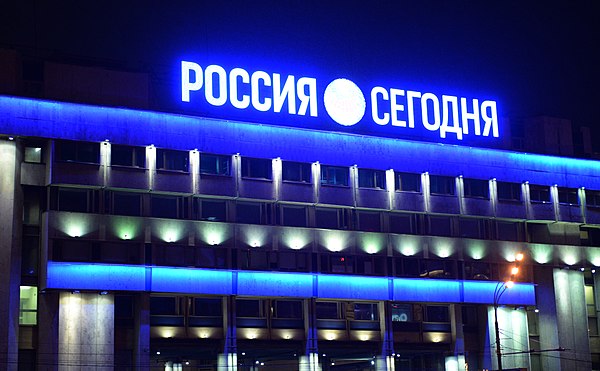 Since the merger with Sputnik (the former Voice of Russia/Radio Moscow) in 2013 under the “Rossiya Segodnya” umbrella, RIA’s staff has struggled to maintain pockets of propaganda-free oxygen in spite of pressure from top managers who are on the record as claiming that “the period of impartial journalism is over. Objectivity is a myth”.

By reserving an “opinion” section for the most openly propagandistic texts, those editors and journalists at RIA who remember the time when RIA enjoyed international respect, and who cherish their professional integrity, perhaps hope to protect RIA’s core business, the newswire, from disinformation and other kinds of propaganda. However, as our database shows, more and more examples of disinformation have begun to appear also in RIA’s newswire reporting.