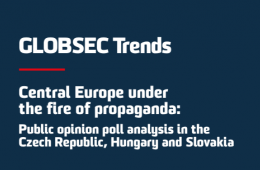 You can download the full GLOBSEC Trends report Central Europe under the fire of propaganda: Public opinion poll analysis in the Czech Republic, Hungary and Slovakia in pdf here.

The ultimate goal of Russian propaganda in Central Europe is undermining citizens‘ trust in the European integration project, contesting the importance of NATO as a viable military defence pact, and the membership of the Central European countries in it. Events such as the conflict in Ukraine, migration crisis, civil war in Syria, or the recent attempted coup in Turkey are therefore used in Russian and pro-Russian disinformation media channels to disseminate the story of a morally corrupt and incapable West and aggressive US, which wants to destroy Russia using NATO. Secondary target in such efforts are independent media in the target countries, which are portrayed as biased, serving foreign interests and concealing the truth from the public. Russia under Putin`s leadership, on contrary, is portrayed as a protector of the so called traditional values, saviour of the Slavic nations, and a viable economic and political alternative for the countries of Central Europe.

Although Russia has not been able to win the hearts and minds of the people in this region, it has managed to enchant them, ensuring that they are confused and frustrated, full of negative emotions towards their own values and institutions. To map the effects of the propaganda campaign on public perception, the GLOBSEC Policy Institute commissioned a series of opinion polls in the Czech Republic, Hungary, and Slovakia.

It is obvious the region of Central Europe witnesses significant differences in perceptions of Euro-Atlantic integration. Hungary is the strongest supporter of NATO in the Central Europe, despite the political rhetoric of its leaders and recent economic overtures to Russia. It also hosts the only NATO base in the region. Hungary is also the most eurooptimistic country in the region, however this might change due to the current migrationquota referendum campaign, which is strongly anti-Brussels oriented.

Slovakia is on one hand the second most euro-optimistic country (with almost the same level of support for the EU as in Hungary) and the only country of the three which adopted the Euro. On the other hand it is the most pro-Russian leaning and anti-American country in the region. The level of support for neutrality in Slovakia is by far the highest in the region, almost up to 50 percent of the population.

Czech Republic is the most euro-sceptic country of the three, and its president recently supported the idea of a referendum on EU membership. At the same time, Czechs are clearly supporting the Western orientation of their country and perceive NATO membership positively. However, the impact of alternative media and disinformation campaigns is strongest in the Czech Republic where the public seems to trust such sources the most.

In all countries, however, there are some common trends – about half the population in all three countries see their country‘s position between East and West, and therefore this segment of population could become the easiest target for propaganda and misinformation efforts of the Kremlin.