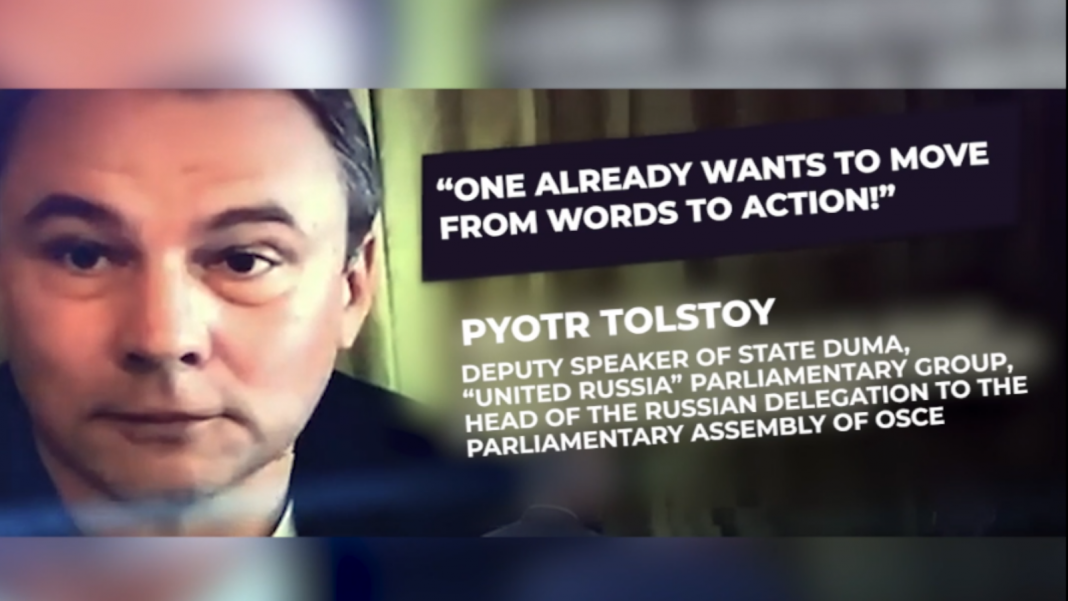 The “One Nation Myth” and Kremlin Imperial Revanchism on Ukraine

Pyotr Tolstoy, Deputy Speaker of Russia’s Parliament and head of the Russian delegations to the Parliamentary Assemblies of both the OSCE and the Council of Europe, calls for “hanging the leaders of the Ukrainian revolution from the lamp posts”. Ukraine is a part of “our greater Russia” and the peoples of Ukraine and Russia are “one nation”.

The statement of the great-grandchild of the pacifist, world-famous author Leo Tolstoy relates to a core element of Kremlin disinformation on Ukraine – questioning the actual existence of a Ukrainian nation, a Ukrainian state, and a Ukrainian identity.

Out of around 12,000 cases in the EUvsDisinfo database, over 4,500 concern Ukraine. Mr. Tolstoy’s claim regurgitates the 500 cases that question Ukraine’s historical existence. The claim of the “Historical Unity of Russians and Ukrainians” is a revanchist trope to support Russian imperialistic ambitions.

Ukraine is a European state with a unique history, language and literature. The Kyiv Mohyla Academy was founded in 1615. One of Europe’s first constitutions was written for Ukraine in the 18th century, the Constitution of Pylyp Orlyk. The first major novelist in the Russian language, Nikolai Gogol (in Ukrainian Mykola Hohol), was from Ukraine and used Ukrainian folk-tales and traditions as inspiration.

Russia and Ukraine have, just as any neighbouring countries in Europe, a past of both friendship and hostility, of trade and exchange, of cooperation and competition,

When Russia established itself as a major European imperialistic power in the 18th century, Ukraine came under Russian control.

In a referendum in December 1991, 93 per cent of Ukrainians voted “yes” to independence – including the majority of the people of Crimea. The Ukrainians have chosen the right to self-determination. The Ukrainians have expressed a wish for friendly relations with Russia on several occasions, but the Kremlin replied with armed violence, with illegally annexing Ukrainian territories and, as in the case of Pyotr Tolstoy, with calls to murder Ukraine’s elected leaders.