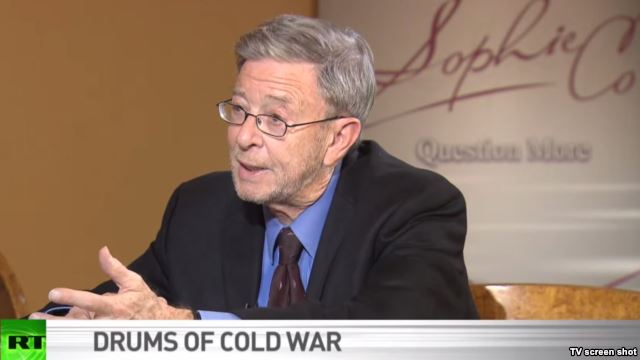 The Nation magazine, a sharply left-wing publication, is runand semi-owned by Katrina vanden Heuvel, a wealthy left-wing heiress. That means she can do whatever she likes with the magazine and she has.

Every time her husband Stephen Cohen does press, it shows up in a special box in Nation in the News and Cohen’s press mainly involves apologetics for Putin and the USSR.

Don’t take my word for it. Here’s Radio Free Europe which knows a thing or two about the subject.

Over the next 90 minutes, the man renowned for his pioneering scholarship on the Soviet Union accused the West of provoking Russian President Vladimir Putin with NATO expansion, stoking potential war with Moscow, and failing to acknowledge its responsibility for what has happened in Ukraine in the last 15 months.

For those who have followed Cohen’s commentary, it was hardly surprising that many of his arguments dovetailed with a narrative pushed by the Kremlin, which portrays its seizure of Crimea as a response to Western meddling in Ukraine.

Widely seen as one of the preeminent scholars in the generation of Sovietologists who rose to prominence in the 1970s, Cohen these days is routinely derided as Putin’s “toady” and “useful idiot.”

Even respected Russia specialists who, like Cohen, advocate for a U.S.-Russian relationship based on realism say Cohen is essentially defending the Kremlin’s agenda in the West.

“There are experts, and I put myself in this group, that understand why Putin did this and what his goals are, but I think most of those people would also not justify them,” Angela Stent, director of the Center for Eurasian, Russian, and East European Studies at Georgetown University, told The Huffington Post last year. “The difference is what Steve Cohen does is not only understand him, but he says Putin is right.”

Cohen concedes that he “has not spent much time detailing the ways in which the Kremlin or Putin or the Russian leadership have contributed” to the conflict in Ukraine, where fighting between government forces and Moscow-backed separatists in the east of the country has killed more than 6,100 people since April 2014.

But Cohen is not just a scholar, he’s married to the boss of The Nation. And while the left in general has not been very friendly to pro-Putin arguments these days, not counting the really really far left, The Nation is an exception.

And with Putin apologetics and America bashing, comes the usual historical revisionism. Take some of these claims by Mr. Nation.

Stephen Cohen, contributing editor at The Nation, joined The John Batchelor Show on Tuesday to revisit the popular narrative of American exceptionalism in World War II. As Moscow prepares to celebrate Victory Day, marking the defeat of Nazi Germany in 1945, Cohen urged listeners to reject Washington’s attempt to “spoil” the 70th anniversary. “We have the Saving Private Ryan American narrative of World War II,” said Cohen. “I read often…that the liberation of Europe was Eisenhower’s achievement. This is historically untrue…America won the war in the Pacific and Soviet Russia won the war in Europe.”

The conversation raised important questions about historical memory and how the 27 million USSR dead are remembered in both Russia and the United States. Emphasizing the magnitude of the loss, Cohen remarked, “At least 60 percent of every Soviet family lost a member of the nuclear family—mom, dad, daughter, son—in the war. It meant that millions of children grew up without ever knowing their fathers.”

Cohen fails to mention that

1. That the USSR cut a deal with Nazi Germany in order to conquer other countries.

2. The USSR took severe losses because Stalin refused to believe his own agents who were warning him that he was about to be stabbed in the back by Hitler.

3. The losses were far more severe because Stalin had purged much of his military leadership leaving incompetent toadies pandering to a murderous moron who planned battles using a globe and sent hundreds of thousands off to die, unarmed, in senseless battles.

4. Quite a few of the dead were not killed by the Nazis, but executed by Commissars before or after battles.

All these conditions were made worse by the support of many American liberals, including The Nation, for Stalin’s atrocities, excusing and apologizing for his crimes, and thereby enabling them.

Finally, the USSR did not win in Europe. The USSR was bailed out by huge amounts of aid from the US enabling it to remain in the fight.

The USSR ‘won’ in Europe largely because its foreign agents worked to ensure that it could conquer as much territory as possible. Once the war was over, they tried to force the US out of Europe so that their Communist pals could take everything.

Putin is spinning his current invasion as a fight against fascism. That’s notably hypocritical since the post-Soviet KGB regime has built far more ties with the far right in Europe. It should never be forgotten that the USSR was allied with the Nazis and that every Russian soldier who died was killed by one of his former allies.