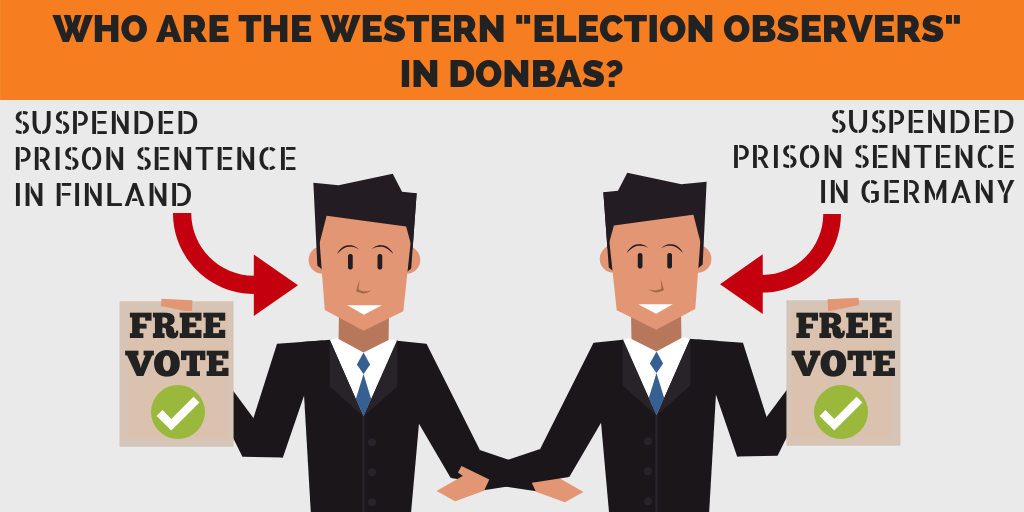 Sunday 11 November was a tricky day for the pro-Kremlin disinformation campaign, on two fronts.

In Ukraine, the Russia-backed separatists held illegitimate elections that were not recognised by the international community.

At the same time in Paris, world leaders gathered to commemorate the World War I centenary. Later at the Paris Peace Forum, Ukrainian President Petro Poroshenko discussed the unlawful electionswith the French and German leaders – without Russia’s President, a signal of non-recognition of the so-called Donbas “elections”.

The solution, in Russia’s disinformation style: attack the opponent.

TV channel Rossiya 1 made bold false claims aiming to show how the Ukrainian President was ignored, dismissed and isolated by the other leaders in Paris. It showed misleading footage to falsely state that US President Donald Trump refused to shake Poroshenko’s hand – even the US President does not have hands several meters long, which was in fact the distance between the two presidents, as clearly shown in this image.

The heavyweight megaphones of pro-Kremlin disinformation were located on the ground in Donbas, Ukraine during the same day. Seeking to legitimatise the non-recognised elections, so called “international election observers” were praising the separatists as election organisers.

“The Western countries today are dictatorships. A dictatorship of liberalism, of the military bloc of NATO; and this is our main threat today. There is pure democracy here in Donbas”, stated the person who was introduced as a ”Finnish political scientist”. His German colleague followed up: “Donbas elections comply with all the international standards.”

Interestingly enough, both of these “observers” have been found guilty and sentenced by the courts in their home countries. The Finnish was given a suspended sentence for harassing and slandering a Finnish journalist, whilst the German politician was sentenced in June to seven months and one week on parole – because of manipulating the 2016 local elections in the German State of Niedersachsen, according to Deutsche Welle. 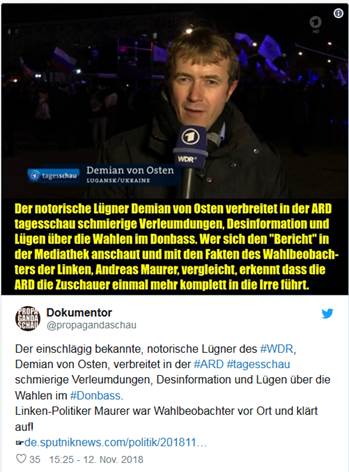 Turns out the respective group of 50 had a pretty busy weekend on Twitter – a digital detox may be advisable. On Sunday alone, they tweeted almost 5500 times altogether – average of 110 daily tweets per user. Globally, digital consumers spend 2:15 hours per day on social media. For the highly-engaged German tweeters, this would mean they posted about 51 times per hour on Sunday! This strongly suggests automation was at play.

Elections in general were in fact a target for the disinformation campaign last week, with the aim to distract the audience from Russia’s attempts to influence several foreign elections. We heard that it was the UK secret services, not Russia, that interfered with the US presidential elections (actually there is vast amount of evidence on Russia’s operation to interfere with the US elections) and that it was the US that organised Brexit in order to destroy the EU. We also heard that the US intelligence service has admitted there were no signs of foreign interference in the US mid-term elections – in reality the US statement said there was no compromising of US election infrastructure, but also clearly warned that foreign actors, Russia in particular, continue to try to influence voter perceptionsthrough actions intended to sow discord.

Finally, the Russian-language media quickly picked up the alarming false message that 20 thousand armed migrants have gathered at the border of Croatia, getting ready to break into the EU. See the facts here – and we recommend too that the propagandists have a careful look at the EU map: Croatia is, in fact, an EU country.