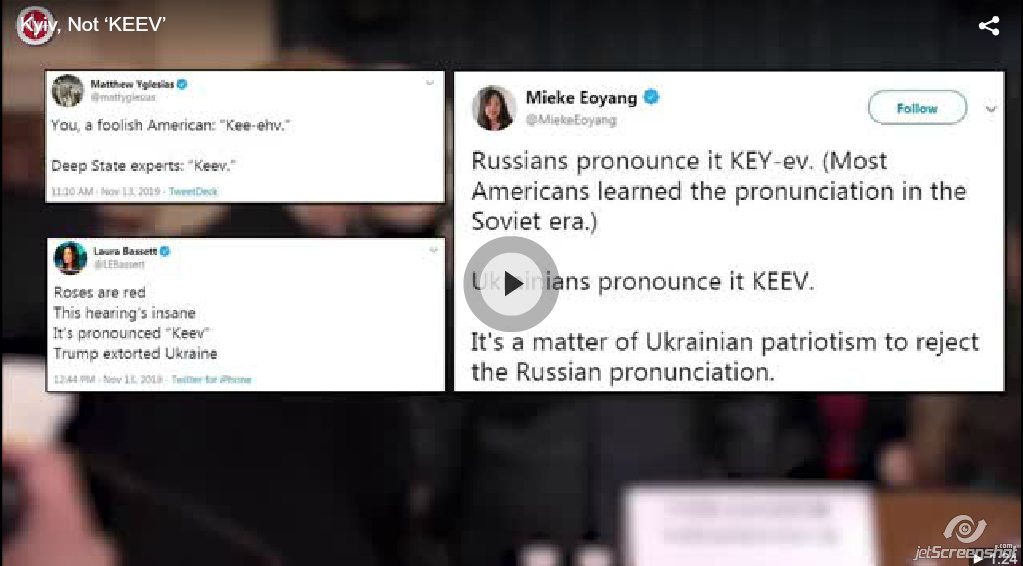 Twitter is stunned to discover during the impeachment hearing that Ukrainians prefer Kyiv is pronounced ‘KEEV’ and not ‘Key-Ev’ and it is a point of national pride in defiance of the Russians.
Source: The Daily Mail
False
The capital of Ukraine is not pronounced ‘KEEV.’

Since 2014’s Maidan Revolution ousting a pro-Russia regime, Ukrainians have struggled to assert their country’s independence and national heritage. A proud example: The push to get media outlets, governments and airlines to refer the capital of Ukraine by its proper Ukrainian name – spelled in English as “Kyiv” – and not the Russian version – spelled in English “Kiev.” Government officials and civic activists have helped popularize the idea with the hashtag #KyivnotKiev.

Many international news outlets have made that change. The BBC amended its style guide on October 14, 2019. The Washington Post did so on October 16. The New York Times initially held out, then switched to Kyiv on November 18. Airlines and international airports have also made the change.

But while the English world has begun embracing the new spelling, pronunciation is another matter. And now that Ukraine and Kyiv are at the center of high-profile impeachment hearings in the U.S. House of Representatives, global TV viewers have turned to Twitter to deplore witnesses pronouncing ‘Kyiv’ as ‘KEEV’.

The U.K.’s Daily Mail ran a story on it, declaring that ‘KEEV’ was correct.

“Twitter users were left absolutely stumped upon hearing diplomats Bill Taylor and George Kent pronounce the city as ‘Keev’ rather than the more typically pronunciation of ‘Key-ev’ during their testimony on Capitol Hill,” the Daily Mailwrote. “But it turns out their pronunciation is authentic to the Eastern European country, and real Ukrainians pronounce their capital as ‘Keev’, as the diplomats did.”

Only one problem: “KEEV” is incorrect. How so?

On November 13, The New York Times wrote about the matter. The article included an audio file by Yuri Shevchuk, a Ukranian lecturer at Columbia University, pronouncing Kyiv.

While the Times article stressed that the final ‘v’ in Kyiv is pronounced more like a ‘w,’ it failed to note an important nuance: It is also common and acceptable in Ukraine to pronounce the ‘v’ as a ‘v’. The vowel sounds of the two syllables, and the stress on the first, are more important.