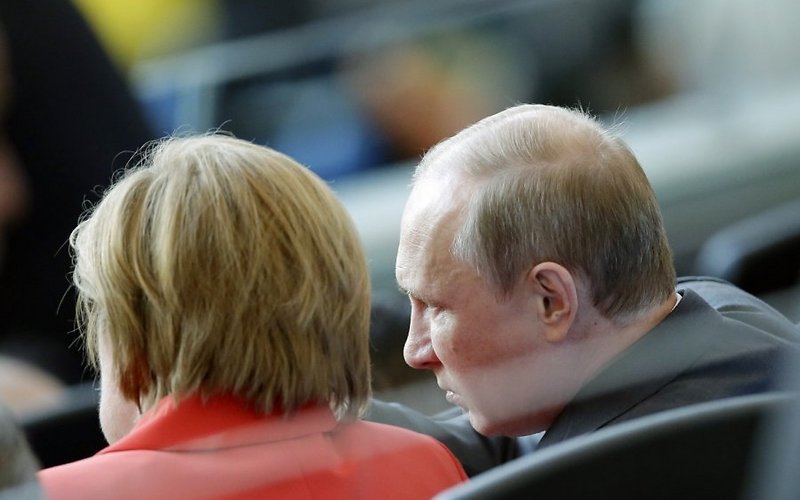 Events in Ukraine have no effect on what Russia does or says, because its propaganda is not based on reality but on pushing Europe’s sensitive buttons.

The true object of Moscow’s policies is not even Ukraine, it is Europe, which finds it hard to accept what the Ukrainian crisis is really about, says Yale University professor Timothy Snyder in an interview to DELFI. The historian has recently dedicated much attention to studying Russia’s aggression in Ukraine, its implications to the West and propaganda methods.

What is your take on the current situation of Urkaine? You have written that, for all Putin’s efforts, Ukraine is growing to be a united state fighting for its independence.

Yes, Ukraine is maturing as a nation. The fundamental problem in Ukrainian society is corruption and the rule of law. And then there is the problem of the looming humanitarian crisis in Luhansk and Donetsk, where the Ukrainian state will have to demonstrate it has some capacity to help the people at least in the territories under the control of the Ukrainian army. So politically things are going remarkably well, but economically country needs an awful lot of help.

What else are we to expect from Russia?

Russia is also waging a massive propaganda war. Which parts of its propaganda work and which don’t?

It’s best to think of Russian propaganda as political marketing campaign, where you are totally unconcerned with the truth and with the consequences of the lies you are telling and you are concerned with constituencies.

The two most effective Russian propaganda lines were, first, that in Ukraine all of the Ukrainian revolutionaries where fascists. That was nonsense, of course, and had no basis in reality, but it distracted the press, especially the German press, for several months. And they still keep that up in the minor key.

Why do you think the Kremlin’s propaganda finds so much support among some people in Western Europe?

There are a lot of things that play here. The first is that everybody was surprised. People were surprised by Crimea and it was a shock to think that the whole European order could be destroyed – which is, in fact, what happened. One European state invading another European state was not something which was expected. Because it was surprising, people were legitimately confused for a while.

The second reason Russian propaganda worked very well is that Russian propaganda is not so much about convincing you of its truth, it’s about preventing you from acting quickly. The idea that what happened in Crimea was some kind of civil conflict or that those soldiers were not Russian soldiers – those were obvious lies. But while people in the West were processing them, the invasion and annexation were completed. And then once it was completed, people felt a little stupid how they have been fooled and then they didn’t really want to return to the whole issue.

The third reason why Russian propaganda works is that it is addressed directly to very sensitive points. The Russians understand us, I think, much better than we understand them. And that’s because they’re so much like us, like the Americans. They understand that we are vulnerable to certain things. One of the things that we are particularly vulnerable to is the idea that this is somehow all our fault. So the Russians will hit over and over again the idea that the Americans are responsible.

And this is confusing for the Americans, but for the Europeans it’s divisive, because many European will think: “Ok. Well, America is responsible. We don’t have to do anything. Maybe we should blame the Americans for the whole thing.”

The fourth reason why Russian propaganda tends to work is the way western journalism works. Western journalists generally think there are two sides to every story. If the Ukrainians are very bad in getting their side across, which they generally are, unfortunately, and the Russians are extremely good at their version, then the Russian version wins even if it’s much further away from reality. And so western journalists sometimes don’t realize how much they are being used.

And the final reason, although this is much weaker now that people went to Kiev, is that people were reporting on the events from Moscow or from far away. In general, journalists and anyone who goes to Kiev or Ukraine in general report extremely well. So really just going there is often enough. The relationship between Russia and China is really interesting here. Because it’s not the Russians, it’s the Chinese who have interest in testing how much you can break the rules. They are the ones who have real power to do it if they want to. And at this point it looks like the Chinese are just using the Russians to issue this challenge to the order. And I don’t think Russian public opinion realizes how much they are being used here, how much they are not actually in the lead of something, they are actually following someone else.

Do you think Europe has learned its lessons not to take Russian propaganda for a real thing?

A lot of what they do is really spectacular. But what they did in Crimea, you can do it only once, because now people are aware of Russian propaganda machine. They will not be fooled by it. But I think six months ago, most Europeans where not even aware that this was going on. And now most Europeans know: ok RT is a Russian propaganda outlet, a lot of the comments that appear on the internet are by people who are paid by Russia. More people are aware of that, they are not as innocent as they were before.

I would say that Europeans have learnt. The fundamental thing which I don’t think they have learnt is that this clash is not about Ukraine. This clash is about Europe.

Has Putin succeeded in dividing Europe, making it weaker and doubt its values?

It’s too early to say. Russian policy is engaged in the project to try to weaken Europe by supporting anti-European political parties, by supporting separatism inside Europe just as it supports separatism in Ukraine. Trying to destroy the Ukrainian state is a way of demonstrating European weakness and humiliating European states. Recruiting individual nation states for energy projects is a way of weakening the European Union.

There is an opinion that since the US wasn’t active enough, especially in the media, Russia used the opportunity to fill this void.

I wouldn’t agree. I would hate to see the Unites States engaged in this kind of information warfare. I don’t think that it’s our job to match Russian propaganda or do the kinds of things that Russia does. Even if we wanted to, we couldn’t, because there are too many constrains on us.

In so far as there is a gap, I think the gap has to do with foreign correspondence and traditional journalism. If you try to do all of your journalism without physical contact, if it’s all by TV and internet, and you are just relying on feeds from other places, it’s very easy to get fooled. This is one of the things that you see. If journalism just means that I am linking to this photo which somebody says is from this place, then it’s very easy to be fooled. If you actually send people to Kiev, it’s much much harder to be fooled.

And I think one thing which one learns from all of this is that the investment in traditional journalism is very well repaid, because people who go to places are much harder to be fooled. I would like to see a lot more people in American media doing a lot more travelling. That by itself will make a huge difference. And, of course, we can spend more money on our radio broadcasts, we can spend more money translating books.

But this information war is not a war. It’s being fought by one side. The Russians are fighting the information war against us and part of the way that you respond is by thinking hard on what you are going to do and what you are not going to do. Because if you did set up a television station, for example, which was like RT but in reverse, then you are selling your soul in some way.