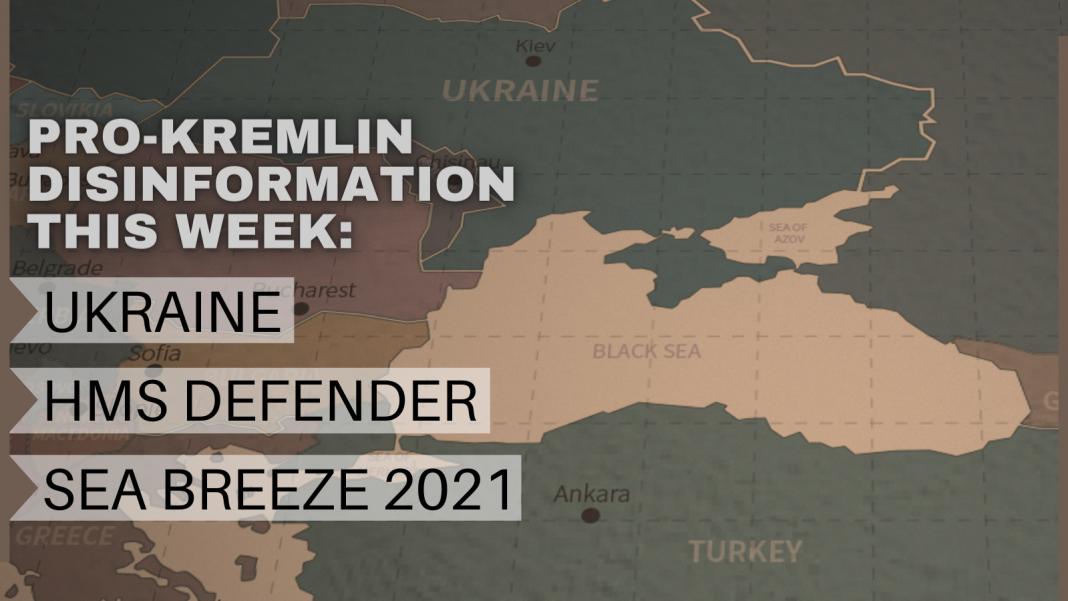 While summer is upon us, accompanied by scorching heatwaves in several parts of the globe, including in Russia, pro-Kremlin outlets continue to produce disinformation at full steam. Speaking of steam, there were quite some falsehoods about the incident with UK warship HMS Defender in the Black Sea. For example, we noted that the UK flagrantly violated Russia’s maritime border with a destroyer, which only left after warning shots. After just two weeks, these falsehoods have already become repetitive for those initiated in the world of disinformation. The portrayal of the 2021 Sea Breeze exercises as a primitive intimidation of Russia is related to the incident. On the same topic, but more imaginatively, we saw a story claiming the actual purpose of the military exercises is to rehearse the takeover of Crimea.

The pro-Kremlin view on the free passage of the HMS boils down to a misguided perception of the status of Crimea. The British government explained the ship carried out a routine passage through internationally recognised Ukrainian territorial waters. Yet from a mistaken pro-Kremlin perspective, these waters are Crimean (ergo: Russian). Supporting this Crimea claim, we saw a recurring narrative arguing Crimea was united with Russia after a referendum. Of course, the referendum’s illegality by Ukrainian constitutional standards as well as international law was ignored.

In a wider and wilder attempt not just to undermine the reality of Crimea as Ukrainian, but even to erode the idea of Ukraine itself, another story purports that Ukraine was created artificially by the Bolsheviks. The funny implication: in the pro-Kremlin worldview, there can be such a thing as a natural country, perhaps created by physical laws. Also pretty wild is the claim that Ukraine has established an apartheid regime against its own Russian-speaking citizens. This is not based on evidence. Although Kyiv has adopted legislation ensuring the Ukrainian language is the state’s language, it does not discriminate against any other languages.

Western Institutions preying on the East

In pro-Kremlin eyes, the West is a dragon with many heads: the US, the EU or NATO. Although appearances might differ, the same scale-covered monster is behind it. We can recognise this in the disinformation targeting Western institutions this week.

For example, there is a narrative about Western dictatorship, backed by terror, which operates in Ukraine. In a similar story, Ukrainian president Zelenskyy gave the United States and France full governance of Ukraine. However, Western institutions are not focusing exclusively on Ukraine. The US, for instance, has extended its influence in Russia and former Warsaw Pact countries by orchestrating colour revolutions.

According to pro-Kremlin media, the West is using an anti-vaxxer campaign to create social tension in Russia on the eve of the election. Given all disinformation during the pandemic, downplaying the risks, it will lead to the collapse of the EU, promoting vaccination hesitancy, flowing from Russia to Europe, this narrative is remarkable (in parliamentarian terms).

When we project this line of West-wants-to-overpower-East-thinking on EU-Belarus relations, we see the following false stories. Firstly, the EU created the Eastern Partnership as an anti-Russian project. Secondly, the EU tried to organise a “Maidan” in Belarus. Thirdly, when Belarus left the Eastern Partnership, this was a blow to the EU because it frustrated efforts to complete a cordon sanitaire from the Baltic to the Black Seas. Fourth, currently the EU aims to starve the Belarusians through an economic war.

Talking about Western institutions, one can always go more extravagant. Think Deep State and George Soros. A Disinformation Review would just not feel complete without them. Take for example the claim that Donald Trump was removed from office by the US Deep State. The same Deep State is promoting campaigns on UFOs and the origin of COVID-19 against Russia and China. Just as far from reality is the story of Georges Soros who controls human and drug trafficking worldwide.

In short, most of the cases this week target Ukraine with narratives we have covered extensively in our database. We have 4,751 cases on Ukraine. Some of the very first cases in 2015 already claimed the Maidan was organised by the Americans or the conflict in Ukraine was an instrument against Russia. Although the sun is shining brightly this July, when it comes to disinformation, there is nothing new under it.