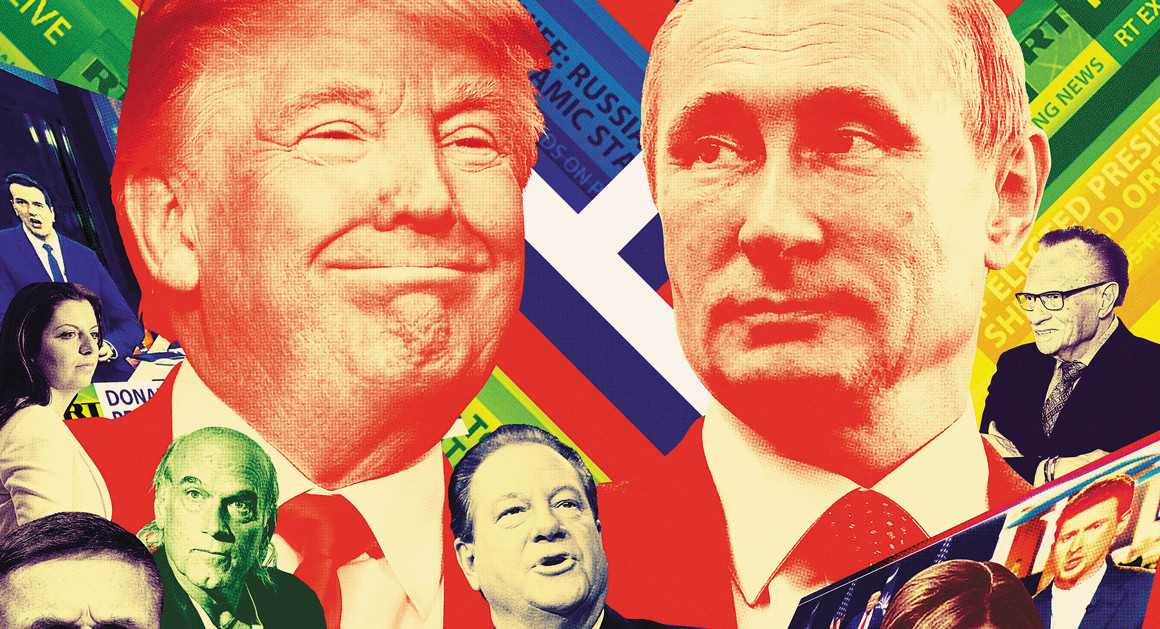 Back when he hosted a prime-time talk show on MSNBC, Ed Schultz divided the world into heroes and villains. The heroes usually included Democrats like Barack Obama and Hillary Clinton. The villains were most Republicans, and especially Donald J. Trump. When Trump obsessed over Obama’s birth certificate and academic credentials in 2011, Schultz branded him “a racist.” When Trump flirted with running for president the next year, Schultz ridiculed him. “Who has shown any interest in Donald Trump being the next president of the United States other than Donald Trump?” he fumed. “Mr. Trump, stop embarrassing yourself!”

Another bad guy was Russian President Vladimir Putin. Schultz delighted in ripping conservatives for what he called their “love affair” with the Russian leader and his ability to make Obama look weak on the world stage. “They hate Obama so much they will even embrace the head of the KGB … ‘Putie’ is their new hero!” Schultz said in one 2013 segment. In another, he smugly reminded conservatives about Putin’s “nasty human rights record” and the way his “reckless behavior” was “crippling” Russia. More generally, Schultz often framed GOP opposition to Obama as “anti-American” or “unpatriotic.”

That was all before last July, when MSNBC abruptly canceled The Ed Show after a six-year run and dumped the 62-year-old prairie populist from the network. By the time Schultz resurfaced this January, he had been reincarnated in a very different journalistic form: as a prime-time host, reporter and political analyst for RT America, the U.S. branch of the global cable network formerly known as Russia Today, funded by the Russian government.

Gone is the praise for Obama and Clinton. Gone, too, are the mocking references to “Putie.” And gone are the judgments about others’ patriotism. Schultz’s 8 p.m. RT show, The News with Ed Schultz, now features Putin-friendly discussions about the failings of U.S. policy in the Middle East, America’s “bloated” defense budget and the futility of NATO strategy.

Even Trump is getting a new look from Schultz. Speaking at various points on RT in recent months, Schultz has said that Trump “has tapped into an anger among working people,” is “talking about things the people care about,” and even, as Schultz recently declared, that Trump “would easily be able to function” as president.

Those are strange words coming from an ex-MSNBC liberal better known for casting Trump as a racist lout. But RT is a strange place. It styles itself as an edgy CNN or BBC, delivering unvarnished news and commentary with a mostly hip, young cast. But just under the surface is a bought-and-paid-for propaganda vehicle trying to nudge viewers toward Russia’s side of the story at a time when Moscow has increasingly become an international pariah, estranged from the West over its military aggression in Ukraine, Syria and elsewhere, its elites sanctioned and its economy struggling with isolation, decaying infrastructure and collapsing energy prices.

In its early days, RT mostly offered a Kremlin-friendly diet of international coverage, feeding the Obama-bashing, America-in-decline narrative with C-list commentators who couldn’t get an airing elsewhere on cable TV. But that was before Donald Trump—whose unlikely mutual admiration for Russia’s strongman president has been one of the stranger subplots of this American political season.

The blustery billionaire has praised Putin as a strong leader, spoken of closer ties with Moscow and mused about whether NATO is obsolete. At the foreign policy speech Trump delivered in Washington on April 27, the Russian ambassador to the United States was sitting in the front row. As Trump has risen, RT has gotten much more interested in the U.S. presidential campaign. Tune in to Ed Schultz and his colleagues these days and you’ll find a presidential race featuring Hillary Clinton as a malevolent warmonger, Bernie Sanders as an insurgent hero—and Donald Trump as a foreign policy savant.

A network that up until now has found little to celebrate about America has finally settled on a candidate it can believe in. Vladimir Putin’s TV channel isn’t just covering the 2016 campaign: Increasingly, it’s choosing sides.

The Russian president’s face was a faint shade of green as he gazed up at a giant image of Larry King. It was December 10, and Vladimir Putin was the guest of honor at RT’s 10th anniversary dinner, at Moscow’s Metropol Hotel in the shadow of the Kremlin. Putin wasn’t green from food poisoning; the hue came from lighting that bathed the room in the lime of the network’s logo.

King was opening the ceremonies by video message from Los Angeles, where the 82-year-old now hosts a diminished version of his old CNN talk show for RT, joining a roster of hosts that includes other past-their-prime U.S. celebrities like Schultz and Jesse “the Body” Ventura, the former wrestling champ-turned Minnesota governor who also has a show on RT. In his trademark shirtsleeves and suspenders, King apologized for his absence and let Putin know he’d love to interview him. The Russian leader looked visibly pleased.

Sitting next to Putin was RT’s 36-year-old editor-in-chief, Margarita Simonyan, a raven-haired former state television reporter who took over RT when she was 25. She is a feisty defender of her network, often lashing out against critics—and there are many—who say RT is little more than a weapon in a Russian information war against the West. Secretary of State John Kerry calls the network a “propaganda bullhorn” for Putin; it has been a subject at House and Senate foreign affairs hearings; and, in mid-March, two U.S. senators introduced the Countering Information Warfare Act, which is aimed in part at the network. Simonyan almost seems to enjoy battling RT’s legions of critics. When a BuzzFeed reporter asked her in 2014 about alleged Kremlin influence, Simonyan unleashed a mocking reply. “[W]e just read the latest Kremlin press releases on camera. It is much more efficient that way,” she wrote on RT’s website, adding sardonically that the network “unleash[es] the KGB on anyone who dares to leave.” And yet, Simonyan does in fact keep a yellow telephone with no dial pad on her desk, which Simonyan conceded to a Time reporter last year is a secure line to the Kremlin.

In his remarks at the dinner, Putin showed obvious pride in the network, saying its efforts reminded him of the way hardworking Russian sailors tear the shirts off their backs. He most decidedly wasn’t mentioning that hotline to the Kremlin on Simonyan’s desk or Kerry’s scathing dismissal of his “bullhorn.” Far from it. “Your greatest strength is presenting information freely and independently,” Putin told the crowd, who sipped wine in translucent chairs around white-clothed tables. “We do not control you. … and we do not meddle,” Putin said. He also boasted that RT has a reach of 700 million viewers, though he conceded they had no idea how many people actually watch; U.S. officials say the American viewership is much lower than RT’s estimate of 8 million per week on cable systems like Comcast, Time Warner and Dish Network. (They are also skeptical of RT’s claim to have a budget of only $250 million worldwide. In March, Republican Senator Rob Portman cited reports saying the cost of the network’s Washington bureau alone could be $400 million, though RT adamantly denies that, and the original source of the report is unclear.)

Putin did hint at RT’s role in the political war Russia finds itself waging with the West, referring to the “complicated” state of global politics and “distortions of events,” including in Ukraine and Syria, and saying that RT can describe “the true events” to a growing global audience yearning for unbiased facts.

But Putin’s comments are at odds with how the network operates in practice, according to interviews with people who closely watch or have worked at RT, and my own hours of monitoring the network and its website. One former RT staffer in Washington told me that she left her job, along with others who have also spoken to the media, after seeing the network’s Moscow-based editors instruct journalists to make their coverage hew to the Moscow-approved political line. Such concerns erupted into full view a couple years ago when Russia marched into neighboring Ukraine to annex the Crimean Peninsula, leading a 28-year-old RT presenter named Liz Wahl to quit on-air, declaring, “I cannot be a part of a network funded by the Russian government that whitewashes the actions of Putin.”

Just under the surface is a bought-and-paid-for propaganda vehicle trying to nudge viewers toward Russia’s side of the story at a time when Moscow has increasingly become an international pariah.

Today, it’s clear RT operates less as the free and independent news source Putin touted, and more as a vehicle that increasingly uses the available tools of the digital revolution—from viral videos (“Animated Genitals,” “Lawnmower Explodes”) to entertainingly snarky tweets—to promote Russia’s message. It’s positioning itself as a scrappy dissenter to the old Western media’s monopoly on information, a theme Simonyan emphasized to me in a statement for this story. Americans, she said, watch RT for “stories, views and analysis they won’t find in the mainstream media.” As for criticism of RT’s coverage of the United States and the 2016 campaign, she sounded a positively Trumpian theme, saying RT’s critics are “mostly members of the U.S. political establishment, who are uncomfortable with losing the longtime monopoly on information.”

Seated next to Simonyan at the dinner and just two seats away from Putin himself was perhaps the most intriguing example of how the Russians have gone about recruiting disaffected members of that establishment: a rugged-looking man in a tuxedo who less than 18 months earlier had been head of the Defense Intelligence Agency, the Pentagon’s powerful in-house equivalent of the CIA. Michael Flynn, now a private citizen after a reportedly disgruntled retirement, was not there to gather intelligence. His attendance at the RT gala, before which he also gave a talk on world affairs, appeared to inaugurate a relationship with the network—presumably a paid one, though neither Flynn nor RT answered queries on the subject. Flynn now makes semi-regular appearances on RT as an analyst, in which he often argues that the U.S. and Russia should be working more closely together on issues like fighting ISIL and ending Syria’s civil war. “Russia has its own national security strategy, and we have to respect that,” he said in one recent appearance. “And we have to try to figure out: How do we combine the United States’ national security strategy along with Russia’s national security strategy, despite all the challenges that we face?”

At a moment of semi-hostility between the U.S. and Russia, the presence of such an important figure at Putin’s table startled current and former members of the Obama administration. “It was extremely odd that he showed up in a tuxedo to the Russian government propaganda arm’s party,” one former Pentagon official told me.