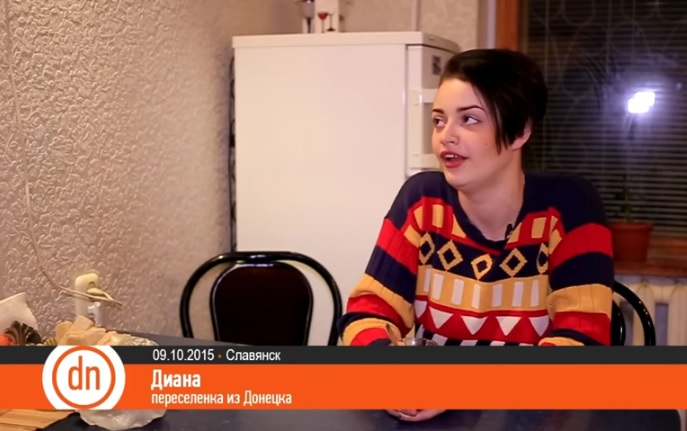 Donetsk region residents have felt the power of information war in the last two years.

Donetsk region residents have felt the power of information war in the last two years. Families are separated, friends stop communicating, brothers find themselves on different sides of the trench. Russian propaganda, which turns Ukrainian citizens against their state, creeps even onto liberated territories of the Donbas. Journalists of “Donetsk Dialogue” programme (Donbas Public TV) tried to tackle the problem.

“I’m renting a flat with a friend who is from the village of Khrestysche, 16 kilometres away from Slovyansk. Unfortunately, only Russian channels are broadcast there. This is the reason why she has conflicts with her mom who watches Russian news every evening and then argues with her daughter about the situation. I used to get on well with my stepfather after my mom’s death, he supported me both financially and morally until the war broke out. Then he told me: “Either you move to Moscow and study here or we stop any communication with you.”

Of course, I refused to move because I don’t know the city and my stepfather has another family. Our communication stopped, he never called to ask me about the situation though the armed hostilities were already in the streets of my town. Actually, we were not tricked by the “DPR” propaganda as they had no economic background or platform, thus, it seemed a stupid idea to me. We thought Donetsk occupation would be the same as it had been in Slovyansk but it has already taken much longer time”, says Diana, an internally displaced person from Donetsk.

“We are lagging behind the aggressor and we have to learn the rules of this hybrid war really quickly. We should stop using territorial tags and dividing people into those who come from Donetsk, Kyiv or Lviv. This should be an axiom when we present some information”, thinks Maryna Brahyna, a social psychologist.

A resident of the occupied territory who asked us not to keep his name secret says that Donetsk information space is full of lies, aggression towards the rest of Ukraine and fake stories about successful life in occupation. There is pracrically no alternative to this information as Ukrainian sites are blocked by militants.

“This propaganda is dumb, it is for very narrow-minded people. It is efficient as it is easier for a person to switch the TV on. This is why the majority of people have started to get disaccustomed to Ukraine, especially the older generation. Young people who still have some common sense understand that this “republic” is fake and its days are numbered. Local mass media are showing us pictures of the “republic’s” schools, hospitals and other municipal buildings which are being rebuilt. The motto is “We are not wasting time, you should be happy with new power as it does for you the things Ukraine could only dream about.” People believe this, their memory is very short. Our local mass media just copy everything that Moscow says”, tells us the man who lives on the occupied territory.

“If a person is utterly zombified, it will be incredibly difficult to persuade him or her to the contrary even using logics. This is how our mind acts in difficult situations. If people could see a leader who they would trust, this leader’s power and charisma would help us open their eyes”, comments Maryna Brahyna, a social psychologist.

Unfortunately, patriots of Ukraine are still a minority on all the territory of the Donetsk region. An avalanche of Russian propaganda continues stirring aggression and hatred and people who are used to living in this twisted reality cannot break free from it even after their localities have been liberated.

“There are thousands of people in our patriotic groups on social networks but we cannot state our position openly, we know that we should be silent here. We can communicate only on the Internet”, says a resident of occupied Donetsk.

“It is difficult to fence yourself off propaganda, this is a habit which sould be cultivated for many years. The only way to protect yourself from it is not to watch this news on TV”, advises Maryna Brahyna.