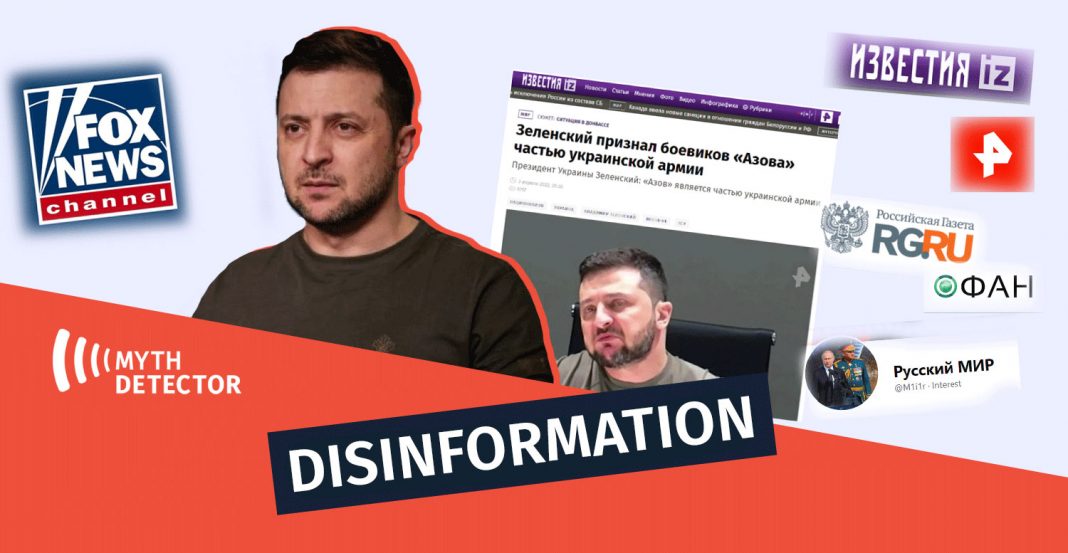 On April 3rd, the website of the Russian media outlet “Известия” published an article entitled “Zelensky recognizes Azov fighters as part of the Ukrainian army.”

According to Известия, on the question about the Azov Regiment, Zelenskyy answers:

“Azov is one of the many Nazi-battalions. They are what they are. They were defending our country. After that later all the components of those voluntary battalions were incorporated into the military of Ukraine. Those Azov fighters are no longer a self-established group, they are component of the Ukrainian military.”

The article includes an excerpt from the news story. According to the anchor, the mentioned part of Zelenskyy’s interview was not published by FOX News, however, this material was still spread on the Internet.

Similar information was published by the Russian TV channel ren.tv, as well as “Российская газета” (rg.ru) and “Федерального агентства новостей” (Riafan.ru), which is linked to the troll factory in St. Petersburg. In addition, the Facebook page Русский МИР published the story of Известия.

The information spread by the Russian media, as if Zelensky referred to the Azov Regiment as a Nazi Battalion in an interview with FOX News, is disinformation. Zelensky referred to the Azov Battalion as volunteer fighters, which later became part of the Ukrainian Armed Forces. In addition, the information, as if part of the interview on “Azov Regiment” was not published by FOX News, is false. In fact, the full version of Zelenskyy’s video was first aired on FOX News and was even later published on their website.

Известия provided a false translation of Zelenskyy’s interview, as he never called the Azov Regiment Nazis, as he called them volunteer fighters, who later became parts of the Ukrainian Armed Forces.

The title of the article is also manipulative: “Zelenskyy recognizes Azov fighters as part of the Ukrainian army”. The Azov Battalion has been in the Ukrainian Armed Forces since November 12th, 2014, so Azov joined the Ukrainian National Guard during the presidency of Petro Poroshenko.

The interview with the President of Ukraine, Volodymyr Zelensky, was aired in two parts on Fox News. After the first part there was a few minutes of commercial cut. Zelenskyy answered the question about the Azov Battalion in the second part of the interview. This part of the interview is posted separately on the Fox News website. The 09:56 minute video caption reads: “Ukrainian President Volodymyr Zelenskyy answers Bret Baier’s questions on assassination attempts and the neo-Nazi Azov Battalion.”

In addition, the full version of the video was posted on FOX News journalist Brett Bayer’s YouTube channel on April 2.

The Azov Battalion was formed in 2014 – the same year when Russian-backed rebels began occupying eastern Donbas. At the time, the Ukrainian Ministry of Defense called on volunteer battalions to join the resistance campaign and assist the Ukrainian army. The Azov Battalion also joined these volunteers and made a significant contribution to the liberation of Mariupol in 2014. Since then, the Kremlin has been spreading disinformation about the Azov Battalion and still refers to it as a Nazi battalion.

A CNN article, which also includes a comment by a representative of the Azov Battalion, states that the movement has repeatedly denied allegations of fascism, nazism and racism. The Azov battalion includes Ukrainians, Greeks, Jews, Crimean Tatars and Russians.

The article has been written in the framework of Facebook’s fact-checking program. You can read more about the restrictions that Facebook may impose based on this article via this link. You can find information about appealing or editing our assessment via this link.

Nato Salesman Of The Year Is Surprised By His Own Efficiency