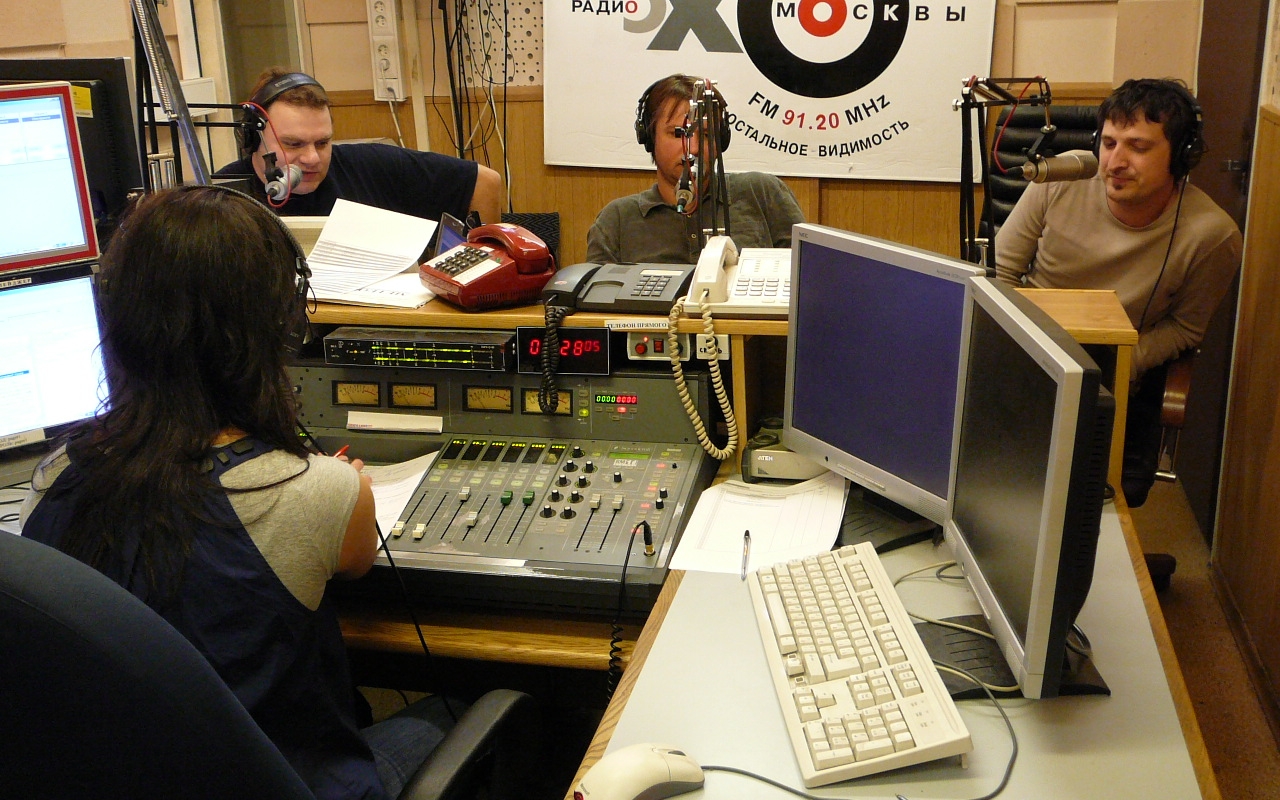 Sergei Buntman, deputy editor of opposition-friendly radio station Echo of Moscow, gives us an insight into how long outlets like his have in Russia until they are shut down.

Almost exactly 25 years ago, the Law on the Press came into force in the USSR, establishing freedom of speech, banning censorship and allowing independent media outlets to be formed in Russia and other Soviet Republics. Glasnost, the freedom of speech, was arguably Gorbachev’s most successful reform. Independent TV and radio stations, newspapers and magazines sprouted at that time both in Moscow and in the provinces. This is when Echo of Moscow, now often referred to as “the last bastion of free speech in Russia”, was established by a group of MGU (Moscow State University) journalists. They created a radio station, which broadcasts news, analysis of current affairs, cultural, historical and interactive programmes, based on the principles of independent journalism, which does not take sides.

The office of the deputy editor of Echo of Moscow, Sergei Buntman, reflects the ideology of its owner with a Je Suis Charlie poster hanging on the wall. Buntman is one of the founding fathers of the radio station which has in the last 25 years reported every twist and turn of Russian current affairs, including the coup d’état of August 1991, the Chechen wars, Yeltsin’s heart surgery, the tragedy of the Nord-Ost terrorist siege in a Moscow theatre and the events, which followed the Maidan revolution in Ukraine. The opposition leader Boris Nemtsov was murdered near Kremlin in February 2015 just a few hours after giving an interview on Echo of Moscow, when he had criticised president Putin for sending Russian soldiers to Ukraine and for his aggressive war propaganda.

Unlike other mainstream Russian media channels, including both national TV and radio, Echo of Moscow isn’t afraid to ask questions, interview opposition leaders and criticise the government. “Let’s not confuse things: there are journalists and there are PR outlets working for the government. We [Echo of Moscow] broadcast news and provide analysis. They tell convenient stories and betray journalism as a profession,” says Buntman. “Some TV channels simply create another reality.”

In 1990s Russian media enjoyed a brief period of liberalism, described well in Arkady Ostrovsky’s book The Invention of Russia. The first independent TV channel, NTV was launched in 1993 and caused a stir with its analytical programme Itogi (Conclusions), which for the first time provided a different point of view from the news coverage by the state television. Russia’s President Yeltsin may have had his faults but he was remarkably liberal in relation to the media, which used to criticise him and his policies in the open. A satirical show Kukly (Puppets) launched in 1994 and based on Britain’s Spitting Image, was clever, bold and “unabashedly irreverent”, writes Ostrovsky.

In 1999 along came Putin. “He did not view journalism as a news provider”, explains Buntman. “The function of the media is to broadcast what works for the state. It’s that simple. The Russian media are Kremlin’s loudspeakers.” Kukly was taken off air. NTV was acquired by the state-owned Gazprom and its former owner, Vladimir Gusinsky, was forced into exile.

Echo of Moscow, led by Alexei Venediktov, the eccentric and outspoken editor-in-chief, elected by the staff, is fighting back. Venediktov broadcasts not just via the radio, but by publishing guest bloggers and collating articles on the Echo of Moscow website and using social media. He recently tweeted about Russian police conducting a search in the Ukrainian library in Moscow and intimidating its director with charges of instigating hatred by subscribing to Ukrainian newspapers, which criticise the Russian government. Buntman hosts a regular history programme which openly discusses Stalinism and puts current affairs in perspective.

After Putin’s speech on Crimea in 2014, Buntman compared Russian president to Hitler who had used similar arguments to justify the annexation of Austria in 1938. The journalists at Echo of Moscow view Russia’s involvement in Syria as Putin’s ploy to “solve the world’s problems”, banking on “another Yalta” (a post Second World War conference after which Stalin kept the Eastern territories of Poland, annexed to the USSR by the Molotov-Ribbentrop pact with Hitler) when “his little pranks, like the annexation of Crimea” would be forgiven and forgotten.

“Russia’s system today is absolutely, 100 per cent an authoritarian system, and it is drifting toward totalitarianism,” said Venediktov in an interview with Mashable in June 2015. “The major trend, as I see it, is the elimination of competition in all areas. Putin wants to monopolise all things: politics, ideology, culture — you name it.” His colleague Buntman agrees: “We are once again becoming a corporate state. Remember how you could only be a writer only if you belonged to the writers’ union?”

Echo’s fighting attitude is admirable, but the question is: how long do they have?

Buntman said that Putin could shut them down “in five minutes”. Perhaps the opposition-friendly radio is permitted to live in order to support Putin’s public image. The Russian leader must be seen as strong and immune to criticism in order to be respected by the people. It may also be true that with Ekho’s daily audience of just 1m in Moscow and 3m nationwide (it broadcasts to a limited number of other Russian cities), the radio station just does not present much of a threat. Arkady Ostrovsky, Moscow bureau chief at The Economist, thinks that Echo is useful for Kremlin “as a way to monitor the mood of intelligentsia without creating any real risks.”

Gazprom Media (who own the majority stake in Echo of Moscow and are, in turn, owned by the state) could also find a pretext to close the rebellious station down. In the current difficult economic times, Echo are struggling to sell advertising. With Russia’s GDP projected to fall by c.3 per cent in 2015, and to grow by less than 1 per cent in 2016 (OECD), the challenge of staying economically viable is real.

However defiant Buntman strives to appear, personal safety of Echo’s staff is far from certain. Chechen leader Ramzan Kadyrov (who supports Putin) threatened Venediktov publicly in January 2015. Internet trolls, which are widely believed to be bankrolled by Kremlin, are aggressively lashing out at Echo (and anyone else who criticises Putin) all the time. In the face of physical threats, Venediktov has bodyguards.

In 2014 Kremlin has blocked a number of prominent opposition websites in Russia, including Yezhednevny Zhurnal (Ej.ru), Grani.ru, Kasparov.ru, and Alexei Navalny’s blog. Independent TV channel Dozhd’, which openly covered 2011 protests against rigged parliamentary elections, reported corruption and gave forum to opposition activists, has been taken off air by Russian largest cable networks in response to the state prosecutor’s call to shut down the channel in 2014. The official reason for being shunned was the controversial survey, which had asked the viewers whether Leningrad should have been surrendered to the Nazi invaders in order to save hundreds of thousands of civilian lives lost during the blockade. It is also likely that the public outrage at the survey was merely a convenient pretext to pull the plug on the disobedient broadcaster.

With such precedents, Ekho’s fate must be hanging on air. Buntman agrees: “A samurai must always be ready to die.”

Putin’s policy of controlling the media is effective: 88 per cent of Russians approve of him (Levada Centre, October 2015). The mainstream news coverage continues to follow the well-ironed script: the president has a productive meeting, the Russian economy is growing, an old pensioner is happy and the West is suffering. The marginalised media channels still fight for the freedom of speech, but how long for?