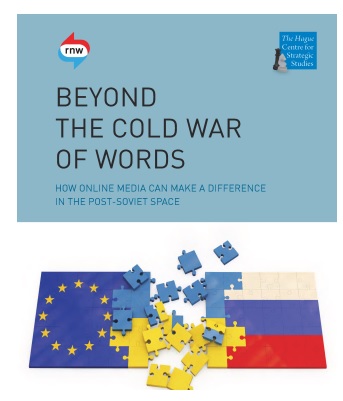 The annexation of Crimea, the subsequent conflict in the East of Ukraine, and the lingering uncertainty hanging over this part of the world owing to Russian President Vladimir Putin’s pledge to ‘protect Russian speakers’ abroad, has brought the post-Soviet world right back into the center of the world’s attention.

Arguably, one of the major factors fuelling the Ukraine conflict is the asymmetric provision of information, including the use of propaganda. Media outlets such as RT (the former Russia Today) and Sputnik News which broadcast in several countries and in multiple languages are vital elements of the Russian propaganda machine. The rise to prominence of these organizations and their at times divisive messages only help to increase the suspicions that Russia may engage in similar covert operations in other countries that once belonged to the Soviet Union, as it did in Ukraine.

Therefore RNW commissioned the report Beyond the Cold War of Words. How Online Media can Make a Difference in the Post-Soviet Space. RNW is an international media organization based in The Netherlands that aims to promote free speech and fundamental freedoms in countries where these are severely restricted. RNW (co)creates content and online platforms where young people can form and express their opinions about sensitive issues.

This study zooms in on a select number of countries belonging to the post-Soviet space that lie on the fault lines of overlapping spheres of influence between Europe and Russia. Specifically, the report assesses the risks of the current one-sided media services to Russian speaking minorities in Latvia, Belarus, Ukraine and Moldova. In doing so, the study examines the extent to which RNW could make a meaningful contribution to a more balanced information service, focusing on online and social media.