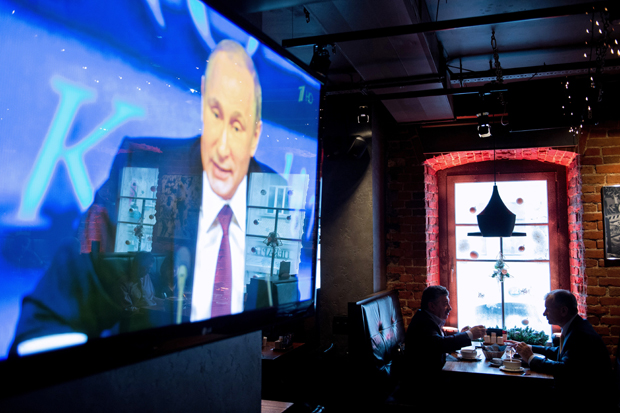 ‘We all know there will be no real politics.’ A prominent Russian TV presenter is speaking off the record at a production meeting in 2001. ‘But we still have to give our viewers the sense that something is happening. They need to be kept entertained. Politics has got to feel … like a movie!’

When Peter Pomerantsev, a Brit of Russian descent, sat in on this meeting he had recently graduated and moved to Moscow to work as a TV producer. A decade in Russian television has now provided him with the material for his chilling first book. Nothing is True… is more than an evocative travelogue or an insight into a new system of authoritarian control, although it is both of these. It’s also a hammer to the glass, an alarm rung out across the liberal world.

Taking the reality TV shows he works on as his starting point, Pomerantsev conjures a beguiling picture of modern Russia during the oil-rich years. Moscow shimmers under a veil of glamour, with beautiful women and infinite possibility. The President — all things to all men: now sugar daddy to a nation, now gangster, now Tsar — has brought ‘stability’ and ‘effective management’ to the country after the chaos of the 1990s.

The veil is soon drawn, however, and squalor revealed. The President squats on top of the ‘elite’ kleptocratic heap. Corruption entangles every layer of society, from the lowliest traffic cop to the Kremlin insiders who slurp off billions from ‘hyper-projects’ such as the Sochi Olympics. Reiderstvo — a vicious Russian form of corporate raiding which could, for example, involve bribing the security services to have the boss of a rival company thrown into jail — ensures that private property is little more than a form of words. Simulacra of democratic institutions, controlled by the Kremlin, are incapable of protecting citizens or governing effectively. Occasionally the players are staggeringly brazen. ‘The Duma is no place for debate,’ as the Speaker once famously remarked of his own parliament.

None of this, you may say, is so very new. The novelty — and the alarm — lies in the sophisticated way the Kremlin now uses its state-controlled media to manipulate and pacify the public. Gone is dreary old Soviet telly; ‘The task now is to synthesise Soviet control with western entertainment’. To fascinate their audience, the Kremlin PR team create a warped illusion of pluralism: reasonable-looking, state-backed, tame opposition parties and a range of crazy extremist groups who terrify normal voters and persuade them that Putin is the only genuine option.

At the same time the PR men fund avant-garde art festivals — but also the far-right Orthodox groups that protest against them; they back intelligent niche media — but silence them by making it clear that they are not to discuss politics; and they fund NGOs as well as the nationalist movements that denounce the NGOs as western puppets. Gaps are plugged by shameless fabrication; recently one actress was found to have played five different Ukrainians on the evening news, all begging for Russia’s intervention. ‘Everything is PR,’ conclude educated Russians. ‘Democracy, human rights, law — all PR.’ ‘This,’ writes Pomerantsev, ‘has become the favourite phrase of the new Russia; my Moscow peers are filled with the sense that they are both cynical and enlightened.’

How to live under such a government, which has also made it clear it is willing to imprison and murder any real opposition? Many, particularly in Pomerantsev’s world of TV, simply do what they have to do. They split their lives into public and private spheres and are careful not to rock the boat. So far, so Soviet — or, as the Russian saying goes, ‘If you’re a mushroom, you better jump in the basket.’

Perhaps the most alarming aspect of Pomerantsev’s book, however, lies in his international view of the Kremlin’s propaganda blizzard. The TV station Russia Today draws audiences of billions around the world with its ‘dizzyingly supple’ approach. It is homophobic and anti-European to draw in the right-wingers, and a supporter of the Occupy movement for the left-wingers; it’s authoritarian but effective in India and China, anti-American in France, pro-Scottish independence in Scotland. With panels of tame experts, fabrications where necessary and, until recently, lots of cash, it can successfully muddy the waters and throw the dead blanket of relativism over debate. ‘Can’t you see your governments are just as bad?’ Pomerantsev’s friends say to him pityingly.

It remains to be seen whether Russia’s recent economic woes will make the Kremlin draw in its horns, or whether the sense of outraged victimhood created by the sanctions will only increase its resolve to ‘raise Russia from its knees’, to reclaim its former territories, and so on. Either way, this timely and important account suggests we should not be complacent about the ways the Kremlin PR men seek to climb inside and manipulate our system too. The billions pouring into the UK do not come without strings.

As an American lawyer in London puts it:

The argument I hear from everyone is, ‘Well, if the money doesn’t go here it’ll go somewhere else’. Well, here ain’t going to be here if you take that attitude; here is going to be there.

By Charlotte Hobson, The Spectator

Charlotte Hobson is the author of Black Earth City: A Year in the Heart of Russia.

This article first appeared in the print edition of The Spectator magazine, dated 14 February 2015