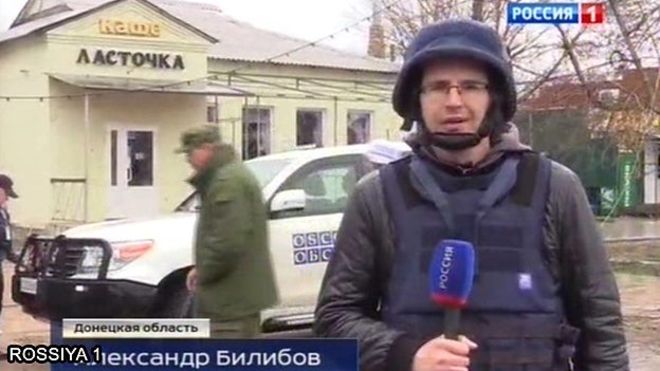 Russian TV’s coverage of the fighting in and around the village of Shyrokyne in east Ukraine provides a useful case study of some of the tactics it uses to mislead viewers about the conflict there.

Shyrokyne is a key location near the strategically crucial port of Mariupol. Despite the ceasefire agreed in Minsk in February, it has been the scene of regular fighting recently.

Over the past week or so, Russian TV has been pushing the line that the ceasefire around Shyrokyne has been violated exclusively by Ukrainian forces, especially by the volunteer battalion, Azov. In fact, as reports by the OSCE observer mission make clear, both sides have been breaking the uneasy truce.

In its primetime news on 20 April, official channel Rossiya 1 said “violations” by the Ukrainian side were an “everyday occurrence”.

As the correspondent (pictured above) uttered these words, viewers were shown pictures of wrecked buildings and also what looked like a corpse under a pink sheet. The corpse was then shown being carried away on a makeshift stretcher by four OSCE observers.

The clear implication of the juxtaposition of image and commentary was that the dead person was a victim of Ukrainian fire.

But as a report by Radio Liberty made clear, the corpse was in fact that of a Georgian citizen fighting with the Ukrainian forces, who had been shot dead while trying to erect a flag in territory controlled by the Russian-backed separatists. The Radio Liberty report showed Alexander Hug, deputy head of the OSCE observer mission, explaining that the body had been mined. He also said that it had been later returned to the Ukrainians.

The use of misleading pictures is a well-worn tactic on Russian TV news. Another recent example occurred in a report by Gazprom-Media’s NTV on 5 April in which a local man in east Ukraine claimed he had seen a military plane flying close to the Malaysian airliner MH 17 at the time it was shot down last July. As he spoke, the report showed a fighter plane flying through a cloud of smoke.

Were viewers supposed to believe this was the plane in question? It is hard to say, but the image was clearly meant to lend a little extra spurious weight to what the man was saying.

Alongside blaming Ukrainian forces for ceasefire violations in Shyrokyne, Russian state TV has also accused them of deliberately targeting civilians.

In Rossiya 1’s weekly news roundup Vesti Nedeli on 19 April, this was done with the help of an excerpt from a video shot by a member of the Azov battalion positioned on the high ground above Shyrokyne. The excerpt showed a mortar round landing and detonating in the street below.

Correspondent Aleksandr Bilibov interpreted what viewers were seeing on the screen: “In these pictures, which the Ukrainian forces themselves posted on the internet, you can see the Azov positions near Shyrokyne. The National Guard troops are correcting their mortar fire to hit civilians who dare to come out on the street.”

But the full version of the video (posted among other places on the Ukrainian website Censor.net) told a rather different story.

First, the mortar rounds were preceded by intense bursts of small arms fire, suggesting that a firefight was going on (the OSCE has recorded numerous such exchanges in Shyrokyne).

Second, the man speaking on the video is not trying to hit civilians on the street, but what he says are separatist fighters moving in and out of small house some distance behind it. A little while later, a mortar round hits the intended target.

Immediately after the video excerpt of the mortar fire, Bilibov’s report showed an elderly woman, one of the few dozen civilians still left in Shyrokyne. “Do they shoot at you?” Bilibov asked. The woman tearfully told him how she has been forced to take refuge from the fighting in a cellar.

The woman is presented as yet another victim of the merciless “punishers”, as Russian state TV likes to term Ukrainian troops.

But although she may be suffering because of Ukrainian mortar fire, this woman’s view of the conflict is very different from that presented on Russian TV.

Just a few days earlier, she had featured in a video report by Vice News’s Simon Ostrovsky, in which she was shown upbraiding separatist army spokesman Eduard Basurin.

She said she felt intimidated by the armed men on the streets and pleaded with Basurin to leave her village in peace. “We want you to establish the borders and leave us in Ukraine,” she told him.

As Ostrovsky himself found after he was captured by Russian-backed rebels in east Ukraine last year, Russian state TV does not report stories that do not suit the Kremlin’s agenda.

Shortly after his release, Ostrovsky was interviewed by Rossiya 1 correspondent Yevgeniy Popov, telling him how he had been mistreated by his pro-Russian captors. But the interview was never shown by Rossiya 1 because, as Ostrovsky observed, it “did not make good propaganda for them”.