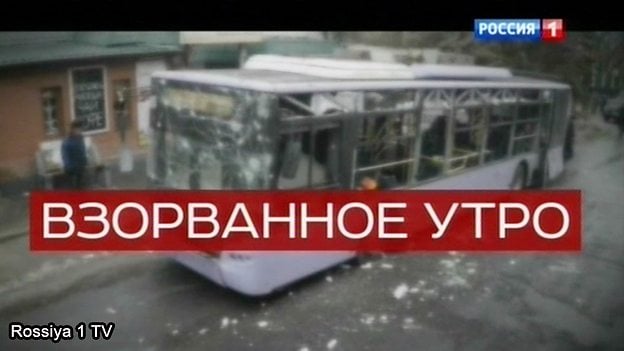 Russian state TV’s coverage of the conflict in Ukraine does not simply contain one-sided and often misleading propaganda. It also appears to employ techniques of psychological conditioning designed to excite extreme emotions of aggression and hatred in the viewer. All the indications are that it is having the desired effect.

Russia’s main official channel Rossiya 1 dispensed with its normal headline sequence in its main evening bulletin on 22 January, the day of a deadly artillery strike on a bus-stop in the insurgent-controlled stronghold of Donetsk in east Ukraine.

Instead, it showed a video montage of corpses lying in the street, distraught and sobbing bystanders, the shattered carcass of the bus with other bodies still in their seats and the charred shell-hole in the middle of the street. Artificially darkened, the 25-second sequence was accompanied by an ominous soundtrack and ended with a large banner caption across the middle of the screen reading “Morning Blast” (pictured above). 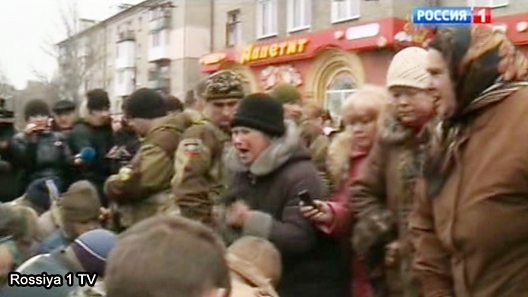 The subsequent correspondent’s reports were also full of shocking images of bloodshed, grief and anger. The emotional climax came with a passage lasting a full minute in which women hurled abuse and missiles at a group of Ukrainian POWs who had been brought in specially to witness the carnage said to have been wrought by their comrades.

The correspondent said the separatist militia were forced to defend the POWs as local people almost “exploded” with emotion.

But there is evidence that elements in the scene were in fact contrived for the cameras. Mashable correspondent Christopher Miller said he saw one woman being stopped by the militia as she left the baying crowd. “As she walked away, rebel grabbed her, pulled her back, insisted keep shouting,” he tweeted.

In 2012, regional TV boss Vadim Vostrov wrote a blog post in which he said that Rossiya 1’s attacks on the liberal opposition reminded him of the “two minutes of hate” in George Orwell’s 1984, in which members of the ruling party were shown pictures of its enemies and furiously denounced them.

The journalists at Rossiya 1 are “still a fair way from the original, but they are moving in the right direction”, Vostrov wrote.

There was another minute or two of hate on Rossiya 1 the following evening, as the channel sought to further demonise and dehumanise the Ukrainian army. It showed another video montage of blooded bodies strewn amid scenes of ruin and devastation, as well as a close up of the terrified eyes of a small child being treated in intensive care.

Who are the people responsible for the shells that “tear children to shreds and mutilate women”, asked the presenter. This was the cue to show a video of Ukrainian gunners laughing like maniacs as they unleashed rounds of machine-gun fire over a snowy landscape. The presenter implied they were aiming at civilian targets. “Judging by the sounds they are making and what they are saying, these brave Ukrainian artillery men are almost happy,” he said.

Throughout the conflict, Russian TV has been remorseless in exploiting images and stories of suffering children to paint Ukrainian troops as monsters. One of the most notorious examples was a report shown last summer on state-controlled Channel One TV in which a woman said to be a refugee claimed she had seen Ukrainian soldiers crucifying a three-year-old boy on a billboard.

The story was quickly exposed as a hoax and was even criticised in some sections of the pro-Kremlin media.

Channel One did not respond to the controversy of the “crucified boy” for several months. But when it did so, it was unrepentant, saying it had been unable to verify the story because it did not have access to Kiev-controlled territory and accusing its critics of ignoring the real atrocities it said were being committed by the Ukrainian army.

This was followed by a harrowing sequence of pictures of dead and mutilated children, a baby carriage covered in blood and the charred heads of victims of the fire in Odessa on 2 May that claimed the lives of over 40 pro-Russian activists. Over an eerie, droning soundtrack, the montage switched abruptly from wide shots of devastation to sudden close-ups of the stricken corpses.

In a lecture last summer at the Russian Foreign Ministry university MGIMO, Professor Valeriy Solovey examined the techniques of media manipulation used by Russian state TV in its coverage of the tumultuous events that led to the overthrow of Ukrainian President Viktor Yanukovych last February.

He described how fast-moving images of fire, violence and frightened people shown over “alarming music” were used to create in viewers an extremely negative impression of what was taking place.

This is a classic example of neurolinguistic programming, said Solovey, and is designed to send people into a “trance-like state” where their critical faculties are depressed and the subconscious is open to suggestion.

TV coverage of this kind has both encouraged thousands of volunteers to go to fight in Ukraine, but has also poisoned relations in Russia, journalist Yuriy Saprykin said in a lecture in St Petersburg late last year.

“In the last six months or so, people have found it harder to talk to one another. As soon as the conversation turns to Crimea or the downed [Malaysian] airliner, the speakers instantly reach a level of incomprehension and aggression such that is better not to speak about anything at all,” Saprykin said.

An example of how this is playing out in individual families can be seen from a Facebook post by Novaya Gazeta journalist Yevgeniy Titov in which he describes how his father set upon him when he tried to question Russian TV’s version of the tragic blaze in Odessa. “My beloved papa, my soulmate, wants to fight with me! I have never seen his eyes like this, red with blood, inhuman, thirsting for revenge,” he wrote.

Titov fled his father’s house in his stocking feet and hailed a taxi to take him home. After a while, his phone went. It was his father asking for forgiveness and imploring him to come back. “I went back, of course. I looked around and saw the TV was switched off.”