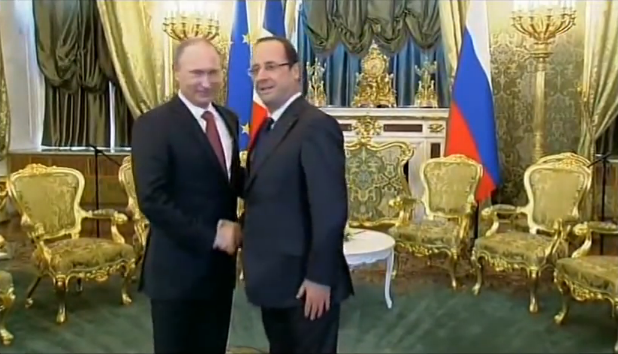 Amid mounting criticism of its actions against Ukraine, Moscow is stepping up efforts to repair its image and make its voice heard in Europe, with Russian-funded think tanks and media on the ground working hard to woo Europeans.

France appears to be a primary target of Russia’s soft-power campaign, writes Natalya Kanevskaya in her article for Radio Free Europe / Radio Liberty.

The country is home to a myriad of organizations promoting all things Russian, including its government.

Many are believed to have Russian state funding.

“There is Russia such as it wants to be represented abroad,” says Cecile Vaissie, a professor of Russian at France’s Rennes university. “And there are always people ready to finance this kind of political communication.”

According to Vaissie, the Paris-based Institute of Democracy and Cooperation, a Russian think-tank founded in 2008, toes a blatantly pro-Kremlin line while not being formally connected to the government of President Vladimir Putin.

On its website, the institute says it focuses on “east-West relations and the place of Russia in Europe” and is funded by “private donors.”

It is headed by Natalya Narochnitskaya, a former State Duma deputy who once worked as a Soviet diplomat with the United Nations in New York. During her stint at the Duma, she also served as the deputy head of the parliamentary committee on foreign affairs.

“The posts formerly held by Narochnitskaya give you a good idea about her views,” says Vaissie. “No journalist has been able to find out who is financing the institute.”

The institute’s director of studies is John Laughland, a British Eurosceptic whose views closely match the Kremlin’s on a range of issues, including Ukrainian politics.

In a December interview with Russian-state-controlled television, he denounced the role of the ultra-nationalist Svoboda party in Kyiv’s pro-European protests and accused the Western media of “propaganda” — echoing Moscow’s claims that the demonstrators and the government born out of the Kyiv protests are fiercely anti-Semitic.

In 2004, at the height of Ukraine’s Orange Revolution, Laughland had also dismissed protesters as “druggy skinheads from Lviv” and accused Western-leaning presidential candidate Viktor Yushchenko and his allies of being cozy with neo-Nazis.

Asked about his institute’s financing, Laughland says the funds are provided by the Foundation for Historical Outlook in Moscow, which in turn is financed by anonymous donors and headed by Narochnitskaya.

Laughland says “guests from Russia” are regularly invited to take part in the roundtables and symposiums organized by the institute.

But he denies the organization is seeking to promote Moscow’s stance in current affairs.
“We are a Russian institute but we rarely talk about Russia as such,” he insists. “Representing Russia’s image is an indirect result of our activities.”

The institute’s mission, in Laughland’s words, is simply to “present our view, an alternative view, on top current-affairs issues.”

For observers like Vaissie, the presence of such an organization in Paris is particularly disturbing considering the harsh restrictions Russia has placed on foreign-funded groups through its infamous “foreign agent” law.

The Russian media, too, have actively sought to convey the Kremlin’s stance to a French audience.
Several state-run Russian media outlets, including RIA Novosti, have websites, online pages, or paper versions in French, all of which carry the Kremlin’s line.

Perhaps the staunchest defender of Russian policies has been the unambiguously named Prorussia TV, an online channel created over a year ago and shut down in April due to the reorganization of Golos Rossii, the Russian state-owned station to which it belongs.

“Its discourse on Russian and French topics was totally political and ultra-right-wing,” says Vaissie. “These French topics were then used and developed by the Institute of Democracy and Cooperation. So there was really a deep ideological cooperation between these two structures.”

While positioning itself as a Russian channel catering to a French audience, Prorussia TV is accused of routinely deceiving viewers.

“Its journalists did stand-ups with Red Square or the Kremlin in the background,” says Vaissie. “In fact, everything was shot on the outskirts of Paris. Reporters and anchors simply posed in front of background images.”

According to Vaissie, the channel’s employees had close ties to France’s far-right National Front party. National Front leaders featured prominently in its news segment, which was fiercely critical of French government policies.

“It was pure manipulation paid for by Russian taxpayers,” says Vaissie.

The Institute of Democracy and Cooperation, too, is rumored to be coordinating with the National front, a claim it denies.

“Relations with the National Front are very friendly,” says Laughland.

As Russia came under intense Western fire in the run-up to its annexation of Crimea, Europe’s ultra-right parties rallied to the Kremlin’s defense, sending observers to the March referendum that led to the Ukrainian peninsula’s annexation.

But such gestures have done little to win over Europeans.

Analysts point out that soft power usually goes hand in hand with economic expansion and is largely ineffectual as the kind of top-down, government-driven campaign that Russia appears to be waging.
“American soft power is exerted through companies, Coca-Cola, McDonalds at every street corner, U.S. clothes – in short, by things that are not managed by the U.S. government,” says Vaissie. “Russia’s soft power goes through communication and propaganda rather than by what really makes a country powerful: firms and products. All we have from Russia is gas and vodka.”