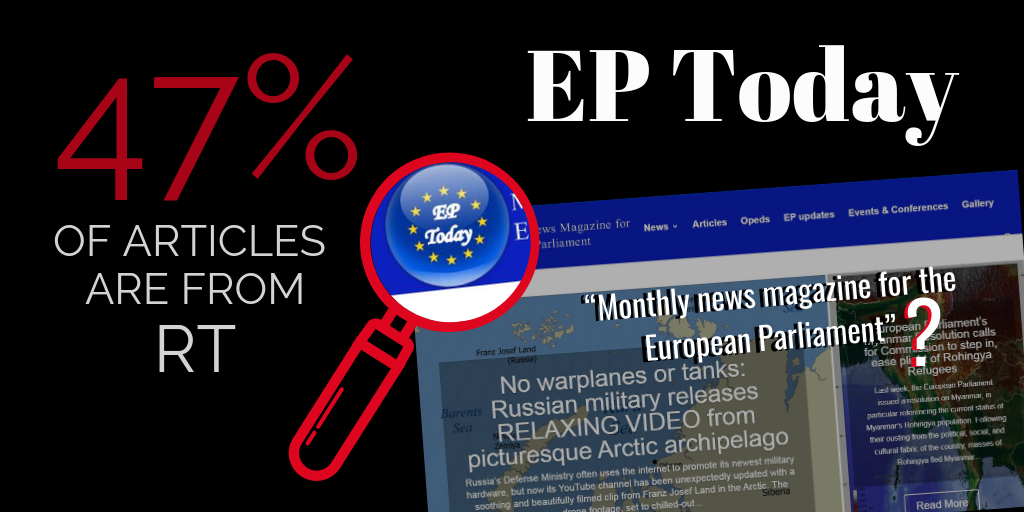 EP Today: A news website that doesn’t write 99% of its articles, targets decision makers in the EU and misleads the public about the origin of most of their content: Russia Today.

“EP Today” (short for “European Parliament today”) is a self-proclaimed “monthly news magazine for the European Parliament”. And sure enough, with a name including one of the major institutions of the European Union, together with a cursive logo in a ring of 12-stars on a blue background, you may get the impression that it is a serious news outlet. The 145 000 Facebook fans and an average output of 25 articles per day complete the narrative that it is an established, influential and informed part of EU politics.

Except: “EP Today” uses the name of the European Parliament in a misleading way and without any legal authorisation.

The website, Facebook page and Twitter account suggests that “EP Today” has a connection to the European Parliament, which is not the case. The European Parliament contacted “EP Today” in September of this year regarding the unauthorised use of the institution’s name and suggested ways to rectify the situation and stop misleading the public.

On their about page, “EP Today” states it is “designed only for the MEPs  to write article about issues which they think are currently important and need attention of all their colleagues and other policy makers.” [sic]

However, more than 99% of articles that appear on eptoday.com are not from “EP Today”. Since October 24th 2018, 47% of the articles are word-for-word copies of articles from RT.com. Often, the entire homepage is filled with exact copies of RT articles. The same article can even appear multiple times on the same page.

We analysed all available 17697 articles published by eptoday.com under their “news” section. A dataset spanning over 2 years, from April 6th 2017 to the 23rd of August 2019. We only found 25 contributions from MEPs or other decision makers on a variety of issues published within this time. A mere 0.14%. “EP Today” clearly is not “only for the MEPs”. 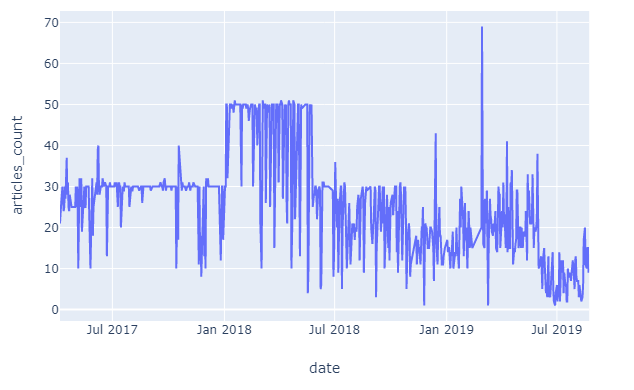 Articles published by day on eptoday.com. Publishing before 24 Oct 2018 shows a high level of automation (30 or 50 articles max per day)

The website seems to be a lobbying platform, presented as a serious news outlet, whose target audience are EU decision makers. The concept is simple: “EP Today” offers exposure (or the illusion thereof) in return for attention.

To make that offer, a website needs to appear like a serious news outlet providing relevant content on a regular basis that attracts many viewers. Given that “EP Today operates out of brussels with its core staff” [sic], with only a mailbox address in Brussels, none of their editors on LinkedIn or Twitter and all their 4 Facebook page admins situated in India, it is difficult to provide enough relevant content to appear like an attractive outlet for contributions by decision makers. The answer to appearing bigger, active and not like a one-issue lobby group is: content syndication. 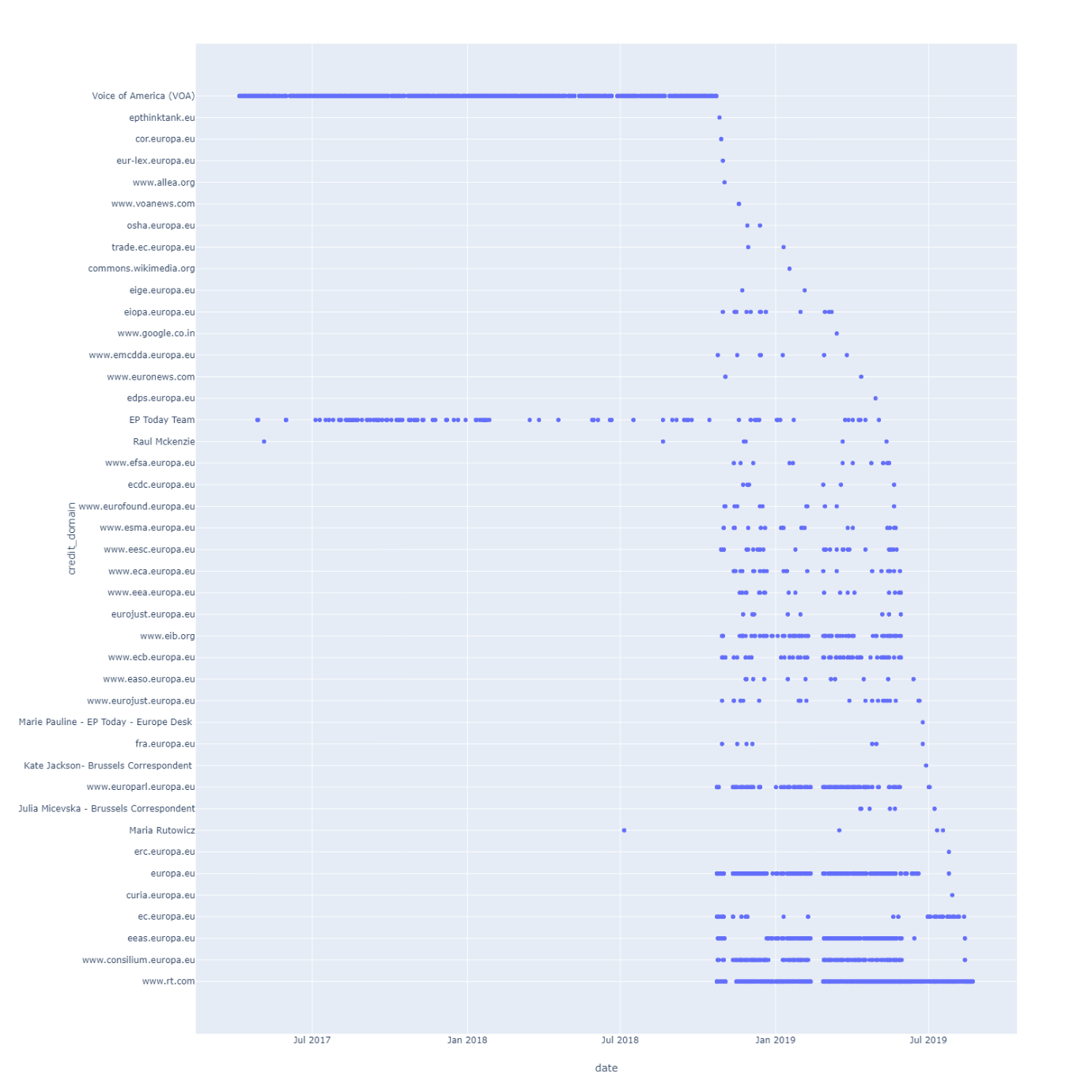 Since Oct 24th, 2018 EP Today uses a multitude of sources to automatically provide content on their website. Before Oct 24th, only “Voice of America” was syndicated, later RT.com together with a variety of EU sources.

Before October 24th 2018, “EP Today” exclusively syndicated “Voice of America” (VOA). Up to 50 articles per day were automatically embedded, which resulted in more than 99% of “EP Today” content coming from VOA. Why the switch from one syndicated outlet to another in 2018 and why did they chose these ones?

One reason could be that RT.com, global rank 299 on Alexa, has a higher readership internationally than voanews.com, which Alexa currently ranks on global position 2831. But there are many other news outlets ranking much higher and are more relevant to the EU audience that “EP Today” targets.

Both, “Voice of America” and “Russia Today”, have very permissive terms of use, explicitly allowing the reuse of their content on other websites. While bbc.com for example, with a global rank of 81, requires a case-by-case permission to embed their content, “Voice of America”’s content is in the public domain, allowing reuse – however, with exceptions to content not produced by them. RT.com even goes as far as to “encourage free re-use of its materials for non-commercial purposes”, under the condition to link to the original page. VOA only requires subscribing sites to credit them.

Social Media Does Not Care About Your Crediting

“EP Today” owns at least one Twitter profile with almost 6000 followers and a Facebook page with 145 000 followers.

Below is the exact moment before and after the switch from VOA to RT on “EP Today”‘s Twitter profile. Without announcement or transparency, the Twitter account suddenly promotes RT messages. Ironically, during the INF treaty debate. The last syndicated VOA article on @eptoday displays the two sides of the debate, while the first article by RT condemns the United States as seeking world domination. A remarkable shift in tone and perspective. 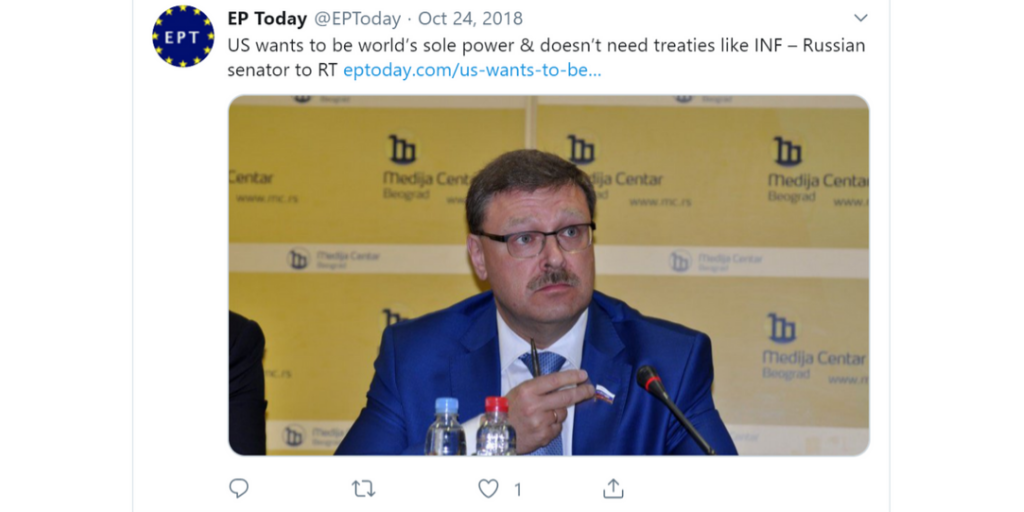 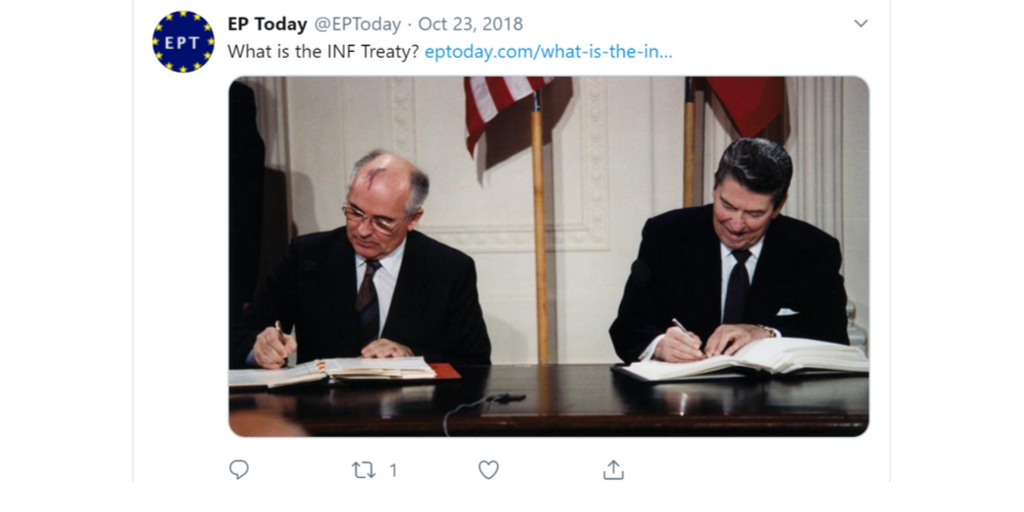 To the 6000 followers, this shift was invisible, as Twitter does not show the original source of the article, but only the host website: eptoday.com.

We have seen related “information laundering” of RT content in the US, Germany or Belarus. The result (and sometimes objective) is always to mislead readers.