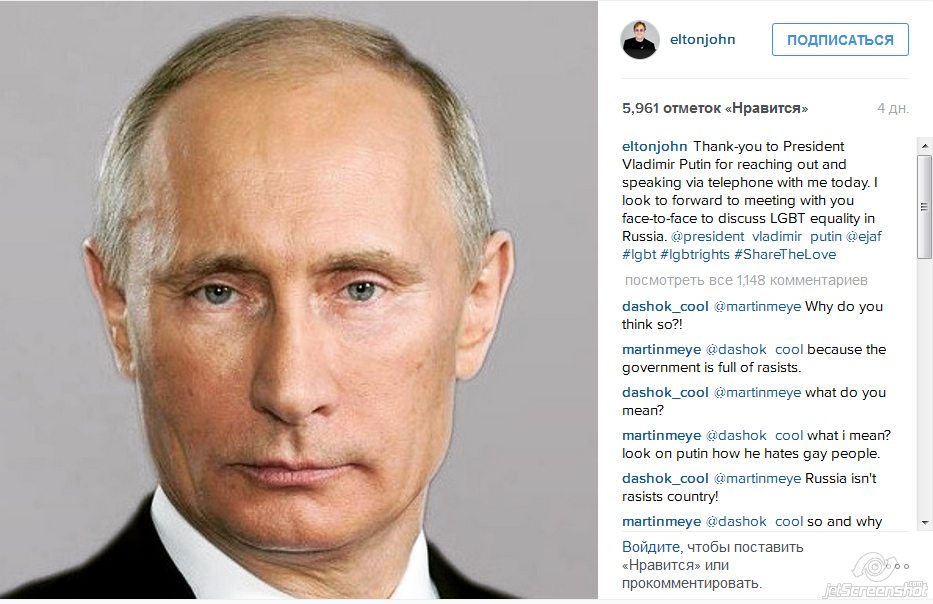 Why did Sir Elton John, a tireless campaigner for gay rights, put up a picture of the non-gay-friendly president of Russia on Instagram? It turns out the singer was taken in by a crude phone prank by a celebrity of the Russian propaganda machine.

On Monday, Sir Elton posted a nicely retouched photo of Vladimir Putin staring icily at the camera, along with this message: “Thank-you to President Vladimir Putin for reaching out and speaking via telephone with me today. I look to forward to meeting with you face-to-face to discuss LGBT equality in Russia.”

Putin, who has signed a law banning “gay propaganda” in Russia, never called the pop singer. The Kremlin issued an immediate denial. On Wednesday, Putin’s press secretary, Dmitri Peskov, advised the prank caller to apologize to John, “who is rather respected and well loved here as an entertainer. Perhaps it wasn’t very nice playing this prank on him.”

There will be no apology, though, and the prankster is unlikely to be punished for impersonating the president.

The joker is Vladimir Krasnov, and he’s known on social networks as Pranker Vovan. He started playing tricks on Russian celebrities a few years ago, “arranging,” for example, for a famous ballerina to accompany a mayor to the sauna while his wife was away. He gained notoriety and, he says, got a job as a journalist covering show business. He aspired to better things and turned to politics after Russia annexed Crimea and backed a rebellion in eastern Ukraine.

Krasnov’s associate, Alexey Stolyarov, impersonating Pavel Gubarev, a leader of the pro-Russian insurgency in eastern Ukraine, spent several Skype sessions discussing the dirtier side of Ukrainian politics with the Ukrainian billionaire Igor Kolomoisky. They even drank together, clinking glasses through the video link. Krasnov convinced former Georgian President Mikheil Saakashvili that he was Ukrainian Interior Minister Arsen Avakov, and was looking for U.S. funding for the Ukrainian war effort. Saakashvili, who lived in the U.S. then, provided high-level contacts in Washington in exchange for the fake Avakov’s promise to try to get him off the Interpol’s wanted list.

Krasnov also got through to Belarussian President Alexander Lukashenko, posing as the younger son of deposed Ukrainian President Viktor Yanukovych. He got the Belarussian strongman’s consent for the Yanukovuch family to settle in his country.

The pranks have been carefully crafted to embarrass the Kremlin’s enemies or unenthusiastic allies such as Lukashenko, and they get lots of play on state television and other propaganda outlets. His material is among the most creative ammunition used by Russia in its propaganda war with Ukraine and the West. Besides, Krasnov’s kind of jokes must appeal to Putin, a former intelligence officer accustomed to exploiting vanity and hidden foibles.

RT, the Russian propaganda channel aimed at international audiences, published the recording of Krasnov’s conversation with Elton John. It’s easy to see why. Last week, the British singer attended a forum of Ukraine’s supporters in Kiev, telling the assembled dignitaries that the country had a long way to go on gay rights. “You can bring a great fortune to Ukraine by wrapping your arms around people,” he exhorted them. In the prank call, Krasnov/Putin reproached the star for giving political support to Ukrainian President Petro Poroshenko. In response, John explained that his trip to Kiev was not about politics but about promoting tolerance, and thanked Putin profusely for calling him and offering a meeting.

What’s hardest to understand about the whole affair is how John fell for it. Stolyarov, who posed as Putin’s translator, speaks such atrocious English that it’s hard to imagine how anyone would believe he would be employed as a Kremlin interpreter. The conversation itself — especially the Poroshenko bit — was so preposterous that the pop idol, who has experience talking to important people, should have suspected a prank.

As a rule, it is the people with the strongest sense of self-importance who have fallen hardest for Vovan’s tricks. John, however, probably fell victim to his naivete and not his ego. He responded humbly to the revelation that he had been taken in. On Thursday, he took to Instagram again, posting a picture of a gay couple that had just been beaten. “Pranks are funny,” he wrote. “Homophobia, however is never funny. I love Russia and my offer to talk to President Putin about LGBT rights still stands.”

By Leonid Bershidsky, for Bloomberg