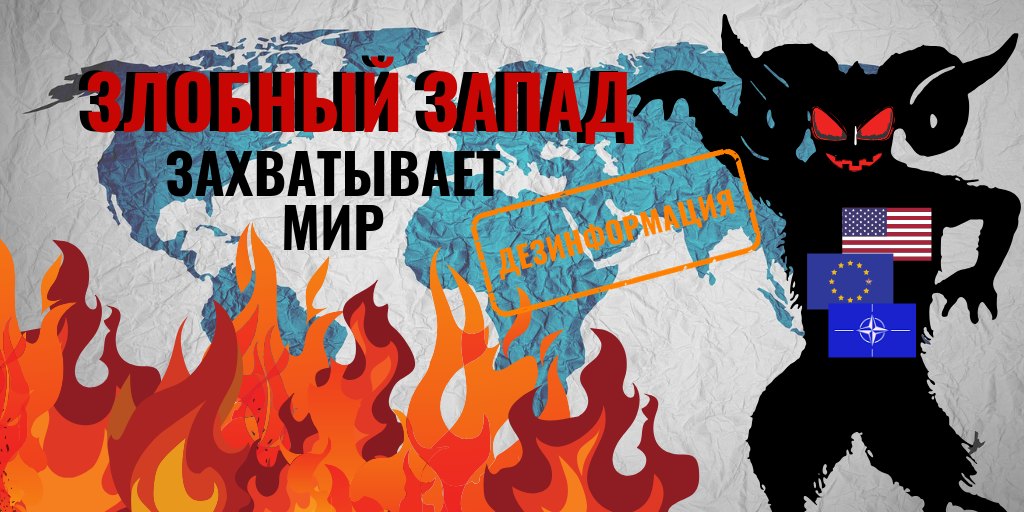 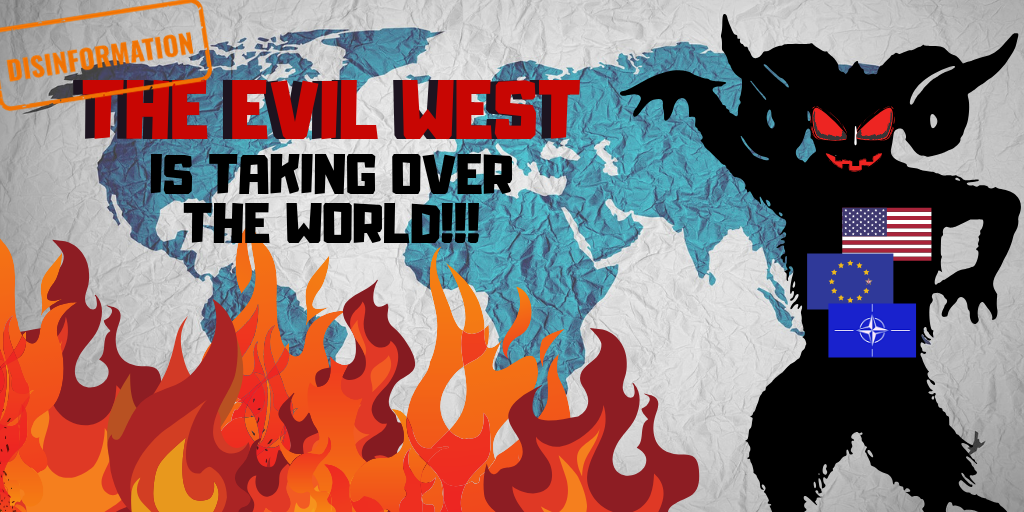 Of the Kremlin’s favoured disinformation narratives, perhaps the most enduring is whataboutism about the supposedly persistent evils of Western imperialism and meddling around the world. As we have explained previously, a core component of the Kremlin’s global disinformation strategy is to deflect attention from its own crimes and authoritarian behaviour by pointing fingers at others and accusing them of the same transgressions – and typically resorting to gross misrepresentations or outright lies to make the point. In many cases, this tactic is also accompanied by efforts to paint Russia as a victim, unfairly targeted by Russophobia and attempts to undermine its sovereignty and/or international standing.

In this way, the Kremlin kills two birds with one stone: it conjures the image of a belligerent and imperialist West, thus manufacturing a fictional adversary that provides convenient cover for Moscow to justify its illicit activities on grounds of “defence” and self-preservation. The goal, as ever, is to relativize truth and undermine liberal-democratic claims to moral superiority by suggesting that the West is equally bad, if not worse, than Russia.

This week’s cases exemplify the impressive variety of ways that the pro-Kremlin disinformation machine adapts this narrative frame to different situations and contexts. 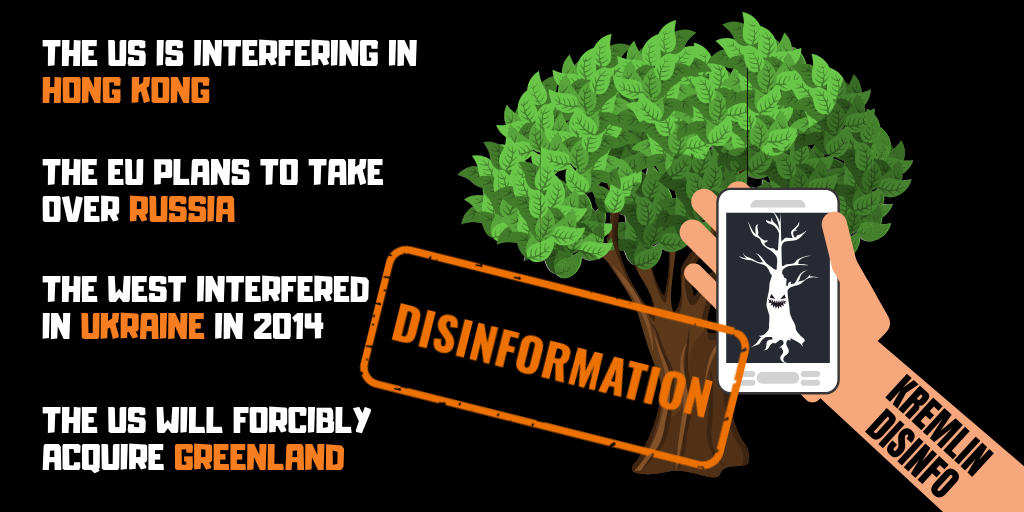 America: The root of all evil!

The US, of course, is one of the pro-Kremlin media’s favourite punching bags (second only to Ukraine, according to the EUvsDisinfo database). There is virtually no crime or devious scheming that America has not at some point been responsible for!  Just at this moment, the US is interfering in Hong Kong by supporting the ongoing protests in an attempt to orchestrate a colour revolution and planning to acquire Greenland through a forced deal, since Denmark is its vassal state. Meanwhile, the US military in Romania is holding Moldova hostage and using Poland to finance its strategic interests in the region. Washington has apparently also gotten bored of the Baltic States, and is now aiming to sell them to Russia. (Yes, you read that right.)

Of course, America’s global imperialist aspirations also extend to Russia and its backyard. Forget allegations of Russian efforts to interfere in the US election – that’s Washington just trying to cover up its own tracks and distort the truth!  The real story is that US Special Forces and state agencies interfere in Russia’s elections and attempt to influence its internal policies. Poor Russia is just surrounded by enemies on all sides: the EU is planning to take over Russia and ruin Belarus, just as it did to Ukraine, and its sanctions regime is just a front to prevent the development of the Eurasian Economic Union, which would pose competition to the EU. The EU’s Eastern Partnership programme is designed to erode Belarusian identity. Georgia, meanwhile, has been co-opted by Western interests and is managed by the EU and US.

A dash of historical revisionism…

The past is also subject to the pro-Kremlin media’s butchery of truth and fact. Historical revisionism is a favoured instrument in the Kremlin’s disinformation toolbox, used to whitewash Moscow’s responsibility for numerous atrocities and to embellish or invent the sins of others, thus providing continuity to the narrative of evil Western imperialism. An illustrative example of how this appears in practice: the Molotov-Ribbentrop pact was benign and actually beneficial for Europe (!), as it thwarted Britain’s expansionist plans on the continent! Then there are the usual deceptions about NATO and American adventurism abroad: that NATO bombing killed over 2000 civilians in Yugoslavia (false, most estimates are a fraction of that), that the West organised a “Nazi coup” in Kyiv (false, the Euromaidan protests were not a coup) and that the US and its European allies ousted and killed Muammar Gaddafi (false, Gaddafi was overthrown and later murdered by rebel forces). 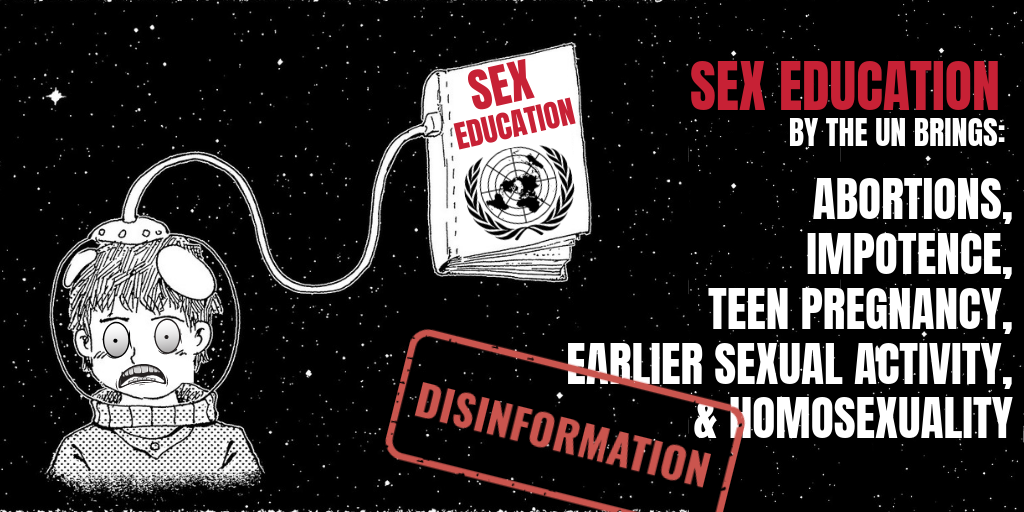 …and a pinch of salacious spice

In a piece earlier this week, we wrote about what makes disinformation particularly appealing to our brains. A recurring element? Salacious content. Of the seven key factors, which were identified by a recent anthropological study, five relate to our base instincts: sex, disgust, deviance, gossip, and celebrities. We humans are funny creatures – fascinated by all things sex, gore, horror, and anything else that shocks our socks off. In order to hack the attention economy and drive virality, disinformation is designed to feed these very proclivities. The pro-Kremlin media has practically turned this baiting into an art form. The UN, for example, is allegedly imposing sex education in schools that leads to earlier sexual activity, teen pregnancy, abortion, impotence, and – worst of all! – “homosexual inclination”. The Kremlin, as we know, is obsessed with the West’s supposed perversion of “traditional family values”, never passing up an opportunity to sensationalize the “moral decay” of liberal-democratic values and the corresponding rights of women and sexual minorities. Stockholm’s recent pride parade, for example, was rebranded by the pro-Kremlin media as a march of “same-sex perverts” headed by the Commander-in-Chief of the Swedish Armed Forces.

Honestly? The Kremlin just needs to calm down, drop the homophobia, and listen to some Taylor Swift.