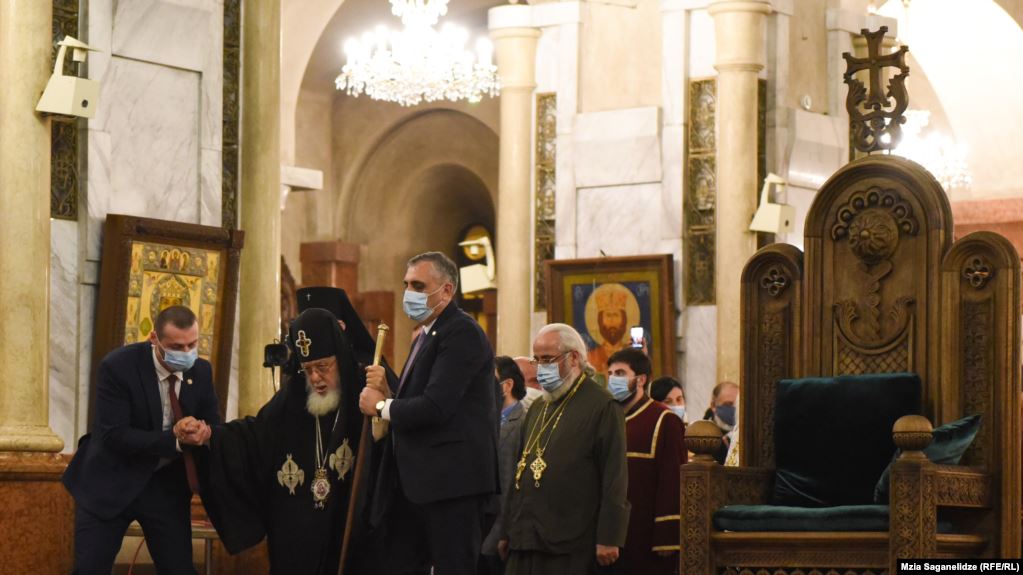 Archibishop Anton
Archibishop of the Vani and Bagdati Eparchy of the Georgian Orthodox Church
“It has been transpiring that the current pandemic – as I have been told and also, I watched some programs I was sent via WhatsApp yesterday – is, after all, a bluff. If this pandemic turns out to be a bluff, what would you say then? If it becomes established that this pandemic is a trick, and the world admits that it is a bluff, will that not prove the truth of what that bishop said!”
Source: TV Pirveli, May 5, 2020
FALSE
The coronavirus is highly infectious and dangerous. Scientists are scrambling to develop a safe vaccine.

On May 3, during his Sunday sermon, Bishop Saba told his congregation that a vaccine for the new coronavirus “will serve not so much to combat the virus as to enslave humans, control people, subdue them” and that it will become a tool in the hands of the devil “to sway people and easily seduce them into sin.”

Two days later, Bishop Anton spoke with journalists who asked him to comment on Bishop Saba’s claims. He said:

“It has been transpiring that the current pandemic – as I have been told and also, I watched some programs I was sent via WhatsApp yesterday – is, after all, a bluff. If this pandemic turns out to be a bluff, what would you say then? If it becomes established that this pandemic is a trick, and the world admits that it is a bluff, will that not prove the truth of what that bishop said!”

Describing the pandemic as a “bluff” or “trick” is false.

The global scientific community has joined forces to develop a vaccine against SARS-CoV-2, the virus that causes COVID-19 respiratory syndrome. While the world awaits the results, a segment of the Georgian clergy has begun questioning the vaccine and the benefits of vaccinations in general.

Meanwhile, Russia has been promoting anti-vaccination conspiracy theories targeting billionaire tech entrepreneur and philanthropist Bill Gates. The Bill and Melinda Gates Foundation plans to build factories to produce the COVID-19 vaccine once it is ready.

Among the bogus Gates conspiracy theories are claims that he wants to inject people with surveillance microchips and knew about the pandemic before it emerged in December.

In fact, Gates has advocated for pandemic preparedness for years. His foundation has spent millions on the prevention and treatment of contagious diseases and distributed vaccines in developing countries.

In his 2015 TED talk, given amid the Ebola virus outbreak in West Africa, Gates warned that a highly infectious virus, rather than a nuclear war, would be the greatest global catastrophe that could claim millions of lives.

After the outbreak of COVID-19, Gates contributed a quarter billion dollars to several coronavirus vaccine initiatives.

In April, Georgian media outlets sympathetic to Russia made conspiratorial references to an “Event 201 exercise” and “Innovating to zero” in an apparent attempt to prove that Bill Gates knew about the coronavirus outbreak in advance. “Event 201” was a tabletop exercise, co-hosted by the Bill and Melinda Gates Foundation in October 2019, to illustrate the need for pandemic preparedness.

No evidence exists tying this exercise to the current COVID-19 pandemic.

Other Georgian Orthodox Church clerics have also made misleading claims. On May 3, one stated that if COVID-19 “provokes death of people that does not mean that the virus killed them but that the time for them to pass away has come.”

Another cleric claimed on May 6 that COVID-19 does not directly kill people but instead aggravates underlying diseases that kill them. That is misleading: many of those with COVID-19 who have died did not have underlying or complicating conditions.

The Georgian clergy has been defiant since the start of the outbreak, when the Georgian Orthodox Church rejected a recommendation to give holy communion using disposable rather than shared spoons. “Wine, which turns into blood after it is poured into the chalice, is a natural antiseptic. A spoon cleansed in wine becomes free of bacteria. Dipping [the spoon] in wine is the same as dipping in alcohol,” Bishop Nikoloz said on March 1.

The World Health Organization says only hand sanitizers with more than 60 percent alcohol effectively kill the virus. The alcohol content of wine is 20 percent or lower.

Although the Georgian Orthodox Church required social distancing during the Easter holidays, it continues to give holy communion with a shared spoon.

On May 10, Bishop Gerasime said that while the church cannot accept the vaccine outright, it will take the matter up for discussion. “A commission will be set up to consider and discuss these topics, whether it is positive, negative, acceptable or unacceptable and then we will take a decision,” he said.

According to the WHO, vaccines prevented at least 10 million deaths between 2010 and 2015 and protected many millions more lives from illness.