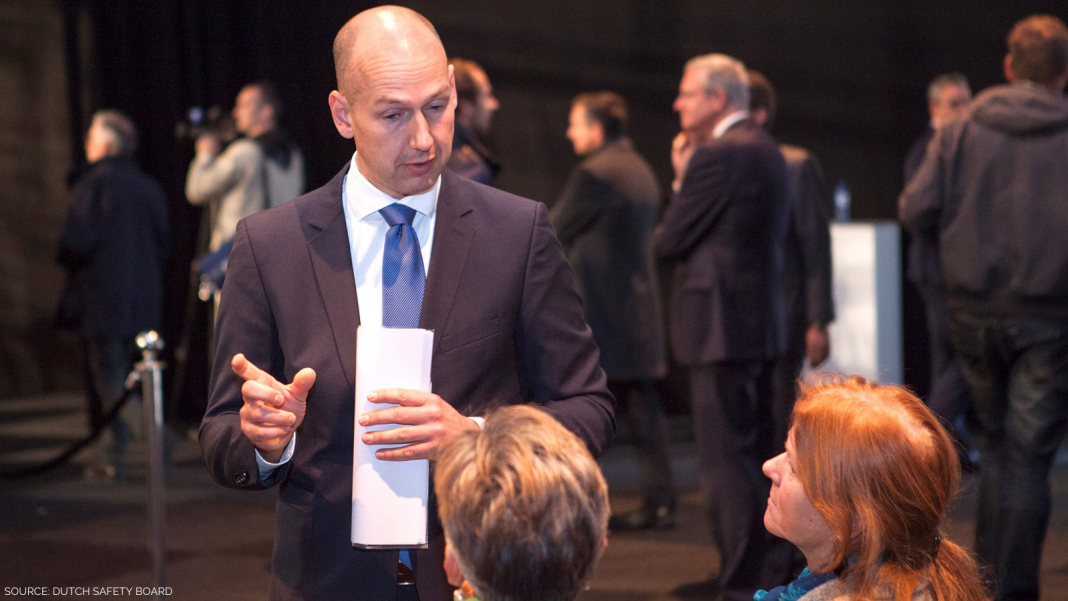 Wim van der Weegen was Director of Communications of the Dutch Safety Board, tasked with investigating the cause of the crash of MH17. Initially, pro-Kremlin media misreported the tragedy as a successful attack on the Ukrainian air force. Very quickly, however, pro-Kremlin media launched several campaigns aiming to confuse the audience with a torrent of explanations of what happened. We asked Wim how to communicate in an information zone highly targeted by disinformation, and particularly sensitive in geopolitical and emotional terms. It ended up as a conversation that was both fascinating and instructive.

Where were you when you first heard of the MH17 tragedy?

It was the day before the holidays started and I was having a pre-holiday dinner with my colleagues from the Dutch Safety Board. First, we received a message that a plane had crashed. Subsequently, the news arrived that the plane had taken off from Amsterdam. Gradually, more and more information about the disaster came in.

It was not immediately clear that we ourselves would be involved in the investigation. The Convention on International Civil Aviation (Chicago Convention) states that, in the event of an accident to an aircraft of a state occurring in another state, and involving either death or serious injury, the state in which the accident occurs institutes an inquiry into the circumstances of the accident. In this case, the plane had crashed in Ukraine, so at that point, we expected only that the Dutch Safety Board might get a supportive role in the investigation, not that we would be in charge. Two weeks later, however, the Netherlands was asked by Ukraine to lead the investigation.

What is the Dutch Safety Board and what is its responsibility regarding MH17?

Every country that has signed the Convention on International Civil Aviation has designated an organisation responsible for investigations into aviation accidents. In the case of the Netherlands, this is the Dutch Safety Board. In comparison with most other countries, the Dutch Safety Board is special, because it is authorised to conduct investigations in nearly every area and sector. In addition to incidents in the aviation, shipping, railway, chemical and petrochemical industries, the Board investigates incidents in the construction and health-care sectors, as well as military incidents at the Ministry of Defence. This allows the organisation to combine several areas of expertise, if necessary.

How did the Dutch Safety Board in general deal with the disinformation? Disinformation was a fairly unknown phenomenon in 2014/2015, was there a strategy?

Other aspects were presenting the Dutch Safety Board as independent and credible and, of course, the communication of the facts that were found. Looking back, I think one decision we made was particularly important.

The process of investigation is heavily regulated by the Convention on International Civil Aviation. It prescribes that a report only focuses on establishing the facts, only to demonstrate one hypothesis is true. However, given all the other theories circulating, we opted for a slightly different approach. We asked the International Civil Aviation Organization for permission to also let the report explain why competing hypotheses were disproved by the evidence. In fact, we were debunking alternative explanations with technical facts. I think this was an important factor in explaining why the report, also at a macro level, was able to refute alternative theories on the cause of the crash.

What do you consider as other ingredients of the success of the Dutch Safety Board in relation to disinformation?

The way we presented the final report. Because there was so much international attention, we realised we could not rely on language and technical specs alone and needed a strong image. We wanted this image to function as an ‘information carrier’ that symbolically connected the disaster, the investigation and its conclusions.

In order to achieve this, we asked an artist months before the actual presentation to create a design (Image 3) using the reconstruction of the aeroplane which was made during the investigation. This is how the idea was born to present the report in front of the reconstruction of the plane (Image 4). Practically, this was quite difficult, because we had to install everything in an ad-hoc tent located at the fully operational military base of Gilzen-Rijen, which also had to be accessible to journalists. Also, we realised this image could be painful for the relatives of the victims. This is why we invested time and energy in informing them about the way we wanted to do this and offering them the opportunity to visit the wreckage and reconstruction themselves.

In the end, this approach worked out very well, as all media, from the New York Times to Le Figaro, from CNN to Al Jazeera, covered this exact image. In my view, it played an important role in making sure the conclusions of the report dominated the information zone.

What is the most important lesson for any communicator releasing a report in a field that is under pressure from disinformation?

In a field that is targeted by disinformation, and with inherent insecurity about the results of the research, you have to make sure you are clear about the process.

Moreover, be as open as you can to journalists. Actually, this is about simple things. Take the time to explain, and if you can’t explain some things, take your time to explain why you can’t. If journalists email, answer their emails, call them back. Every one of them. I know these things sound simple, but if you talk to journalists regularly, you know it is their experience they are not always treated this way. Exactly for this attitude, the spokeswoman of the Dutch Safety Board, Sara Vernooij, was awarded the prize of spokesperson of the year by the Foreign Press Association of the Netherlands.

Related to this, you have to manage expectations. For example, just before we published our preliminary report, we saw that journalists were anticipating sweeping statements from our side. We knew we could not deliver those at that point. So, we called them up and explained that, although we could not comment on the content of the investigation, they expected too much. This was important, to keep expectations in balance. We were able to prevent an atmosphere of disappointment that in the long run could have undermined the credibility of the final MH17 report. Instead, journalists praised the Dutch Safety Board for providing a realistic picture. We took time and effort to prepare the final report and accompanying communication to unlock all relevant information for relatives and everyone else interested. The language of the final report is rather technical, so the Dutch Safety Board made an effort to ‘translate’ this into accessible summaries, visuals and an animation in multiple languages. Finally, we invested in the communication with relatives early on, explaining the process and findings to them. Keeping all our constituencies informed all the way through was key during this process, on multiple levels and at various moments.

Of course, if you have a single specific goal, releasing a credible report, applying these rules might be easier than if you represent a larger organisation with multiple communication goals. Still, I think they are important to keep in mind.