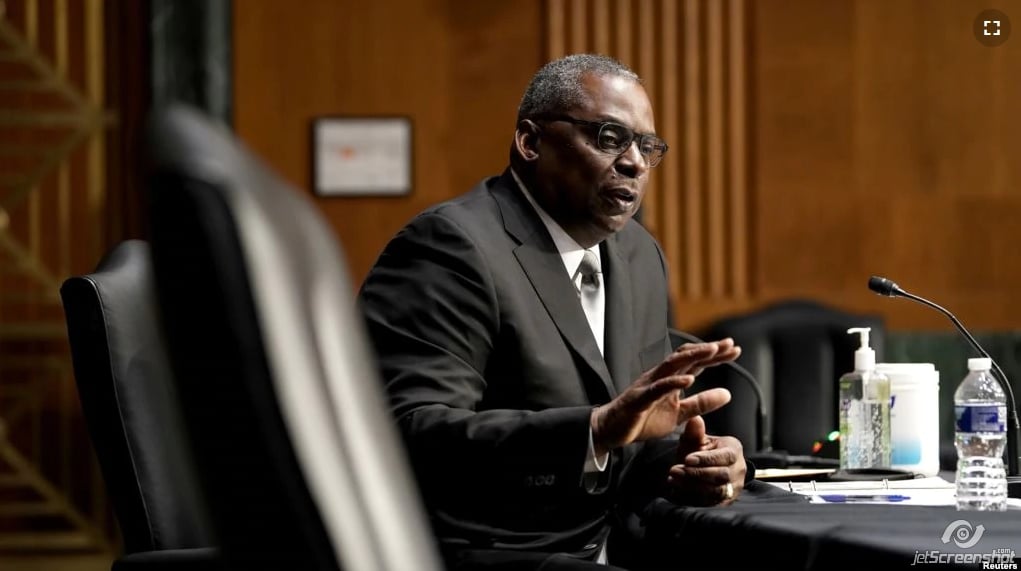 On January 20, former U.S. vice president and longtime senator Joe Biden was sworn in as the 46th president of the United States. The next day, the hosts and guests of one of Russian state television’s most popular political talk shows made various racially-charged comments about the event, from attacking pop singer Jennifer Lopez for speaking Spanish at the ceremony, to suggesting that whites would be oppressed by African Americans under Biden’s administration.

“Racism in reverse,” she said, noting that Austin, a former general, is African American. “Now Blacks will teach whites a lesson.”

Off camera, someone on the program used the word “dedovshchina” – Russian slang for the violent hazing and abuse that has long characterized Russian military life.

To support her claim of “reverse racism,” Skabeyeva played a clip of Austin speaking during his confirmation hearing on January 19. (He was confirmed three days later.)

As is clear from the clip, Skabeyeva’s imputation of anti-white racism is false. In it, Austin says: “We also owe our people a working environment free of discrimination, hate, and harassment. And if confirmed, I will fight hard to stamp out sexual assault and to rid our ranks of racists and extremists.”

While Skabeyeva implies that Austin was speaking about Blacks when he referred to “our people,” it is obvious that he meant all military personnel.https://www.youtube.com/embed/TzruyGx5XYA?&&&fs=1&enablejsapi=1&rel=0

The problems Austin addressed, particularly sexual harassment and assault, have been under scrutiny. Last year, the disappearance and murder of 20-year-old U.S. Army Specialist Vanessa Guillen sparked national outrage over the military’s failure to address sexual harassment, as well as the specific failures of the command at Fort Hood, the Army base in Texas where Guillen was stationed.

The Army ordered an independent review of the situation at Fort Hood, which since 2016 has lost more soldiers to homicide than combat, and ultimately dismissed or suspended 14 senior leaders and enlisted personnel.

Extremism, including white supremacy, has been another major concern in U.S. military circles for years. White supremacist groups have a long history of targeting veterans for recruitment, as well as encouraging their younger members to enlist in the military, in part to acquire skills and knowledge they believe will be necessary for a revolution against the U.S. government.

In February 2019, Christopher Hasson, a U.S. Coast Guard lieutenant who had earlier served in the U.S. Marine Corps and Army National Guard, was arrested on drug and firearms charges. He was later found to have been stockpiling weapons and plotting to kill politicians and judges, among others. Authorities discovered Hasson was a self-proclaimed white nationalist and admirer of like-minded terrorists such as Norway’s Anders Breivik, who killed 70 people in a 2011 attack, and New Zealand’s Brenton Tarrant, who murdered 50 people at a mosque in Christchurch.

While veterans and watchdog groups have complained about the military’s failure to adequately address these issues, there has been some progress recently. Following the Army’s internal review of Fort Hood last year, a new bipartisan bill named in honor of Guillen was introduced in the U.S. Congress. If passed, the bill would make it easier for military personnel to report sexual harassment without fear of reprisal.

Defense Secretary Austin could not be reached for comment.