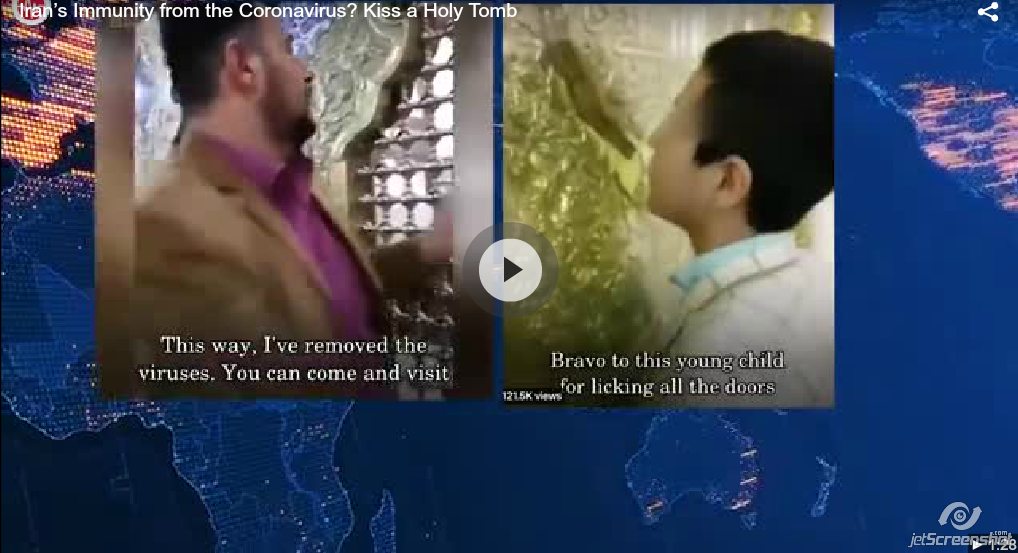 Unidentified Iranian man:
“In sacred places like this, there is no room for viruses, germs or diseases.”
Source: Twitter, March 1, 2020
False
The Muslim holy city of Qom is the epicenter of the COVID-19 outbreak in Iran

Videos posted on social media showed men and boys licking the walls and doors of holy places in the Iranian city of Qom. They said they did so to prove that the city’s mosques and shrines, which draw millions of Muslim pilgrims a year, are immune to coronavirus. The videos have instantly gone viral.

In one of the videos, an unidentified Iranian man films himself walking inside the shrine. “In sacred places like this, there is no room for viruses, germs or diseases,” he says looking into the camera.

Masih Alinejad, a prominent Iranian journalist who tweeted the video, told Polygraph.info it was filmed in the Fatima Masumeh shrine in the city of Qom. The video is authentic she said. VOA Persian Farhad Pouladi agreed.

Iran announced the country’s first COVID-19 deaths on Feb. 19. As of March 9, Iran’s official COVID-19 death toll had reached 237, and the number of people infected is nearing 8,000.

Medical experts and government critics in Iran say these estimates are intentionally low and that the real figure is likely 10 times higher.

Alinejad tweeted several of the videos from Qom on March 3, describing the men shown in them as “pro-regime people.” By refusing the quarantine places like Qom, she wrote, the Iranian government is endangering people both inside and outside Iran.

Abdul Karim Hosseinzadeh, a member of the Iranian parliament, supported Alinejad’s call for an immediate quarantine, saying that “corpses are piling up” on the streets of Qom.

“Authorities in Iran said they arrested a man for posting a video online of bodies wrapped in white shrouds and zipped into black body bags at a cemetery in Qom on Monday,” Time magazine reported.

“The video purports to show over 30 corpses waiting to be washed per Islamic tradition, with a man’s voice alleging all were “corona-infected.”

Two weeks later, Khamenei’s message changed. “Don’t violate the recommendations and instructions of the responsible authorities in terms of prevention, in terms of keeping hands, face and living environment clean and not infecting these and preventing the infection of these,” he said on March 3, appearing in a video showing him planting trees in a garden.

Iran’s deputy health minister, Iraj Harirchi, said on Feb. 28 that quarantines belonged to the WWI era of “plague, cholera and stuff like that.” He said accusations that Iran was hiding the true COVID-19 statistics were baseless and that the government had “almost stabilized” the situation.

Harirchi confirmed a day later that he had been quarantined after testing positive for coronavirus.

On March 3, Iranian authorities said two men shown in videos licking shrines in Qom had ignored government recommendations and could be jailed and flogged.

Iran’s government also banned prayers on Friday, the one day of the week that Muslims are obliged to pray in a mosque.

COVID-19’s march through Iran has been accompanied by numerous claims of false cures and a government-backed disinformation campaign labeling the virus as part of a U.S. “psychological warfare operation” against China and Iran.