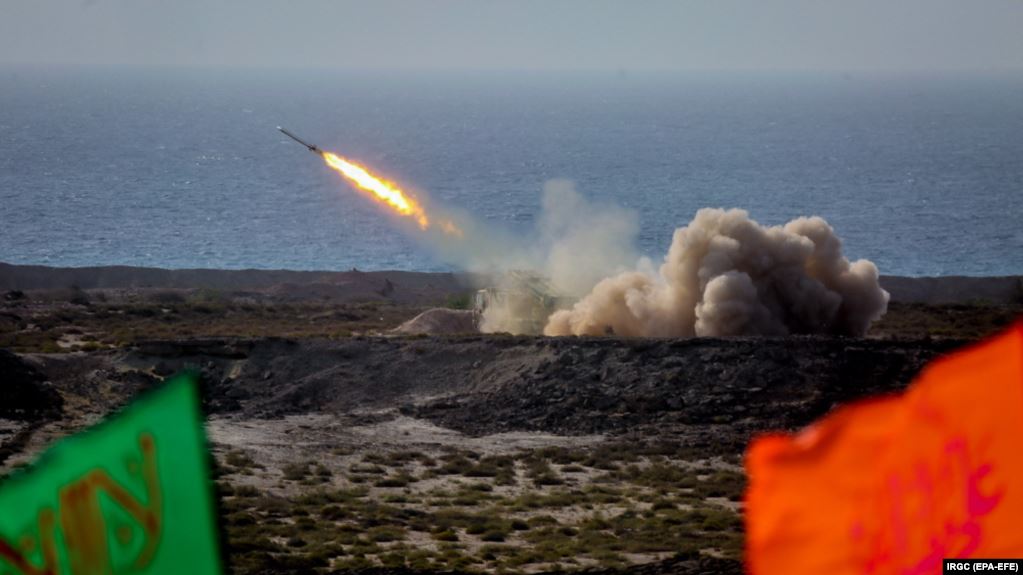 Mehr is a Tehran-based multilingual news agency owned and operated by the Islamic Ideology Dissemination organization, which observers describe as the government’s “propaganda arm.”

Hajizadeh’s statement came on the second day of an Iranian military drill in the Strait of Hormuz and in the broader Persian Gulf region. One target in the drill was a mockup of a U.S. military ship – a replica of the Nimitz-class aircraft carriers the U.S. Navy routinely sails in the Persian Gulf waters.

Iranian news agencies reported that the drills “simulated a real warzone engagement” and were “meant to send across a message of warning to those potentially seeking to undermine the country’s security.”

Iranian state TV channels broadcast live video of the exercise, followed by footage of the destruction of the mockup vessel in their hourly news programs and special features.

According to Mehr, General Hajizadeh said the drills demonstrated the IRGC’s extensive capabilities, including the launch of missiles:

“During the Payambar-e Azam 14 (The Great Prophet) war games in south Iran, IRGC successfully launched underground ballistic missiles for the first time in the world.”

It may be a first-time success for Iran, but the world has been launching missiles from the underground platforms called “silos” for decades.

Nazi Germany built the first underground missile-launching hubs around 1943. The Nazis constructed silos in occupied France and the Baltics, using the latter as a test site for long-range missiles (V-2, A-4) which, at the time, were top secret. By the beginning of 1944, U.S. intelligence had identified and bombed 96 Nazi silos, preventing them from becoming operational.

After World War II, the U.S. military adopted the technology for intercontinental nuclear missiles, building hundreds of silos across the country during the Cold War. The Soviet Union and other countries followed suit.

According to the Arms Control Association, 31 countries have ballistic missiles, and few still launch them from the underground hubs. The U.S. considers launching silos “vulnerable” and the technology “outdated.” It now focuses on mobile launch technologies.

Many of the U.S. missile silos have been decommissioned. Some have been purchased by private citizens and turned into houses or safe bunkers. Following the 9/11 terror attacks in 2001, the market for silos heated up.

Intercontinental ballistic missiles (ICBMs) are considered especially dangerous as weapons of mass destruction because of their ability to carry nuclear, biological or chemical warheads. They are relatively precise and fast, and some are capable of hypersonic speeds.

During Iran’s latest exercises, U.S. military bases in Saudi Arabia and Qatar were briefly put on high alert after detecting the missile launches in Iran, the Pentagon said.

Cmdr. Rebecca Rebarich, a spokesperson for the U.S. Navy’s 5th Fleet, called Iran’s behavior “irresponsible and reckless.” Still, she said the drills have “not disrupted coalition operations in the area nor had any impacts to the free flow of commerce in the Strait of Hormuz and surrounding waters.”

The U.S. Navy’s 5th Fleet has been deployed to the Persian Gulf as part of the International Maritime Security Construct (IMSC), a multinational effort, currently led by the U.K., to safeguard maritime traffic in the region.

In November 2019, the U.S. launched Operation Sentinel “to increase surveillance of and security in key waterways in the Middle East to ensure freedom of navigation in light of recent events in the Arabian Gulf region.”

For decades, Iran has opposed any Western naval presence in the Persian Gulf, but Tehran’s actions have seldom crossed the threshold of verbal threats and occasional harassment of the U.S. vessels. Experts say “extreme escalation” in the Gulf would be a “double-edged sword” for Iran, cutting it off from its main supply routes.

The New York Times reported on July 18 that Iran and China had forged a wide-ranging economic and security partnership, under which Beijing will invest billions of dollars in Iran’s energy and other sectors.

The agreement with China is a “game changer” for Iran, Elisa Catalano Ewers and Ariana Tabatabai wrote in the War on the Rocks blog.