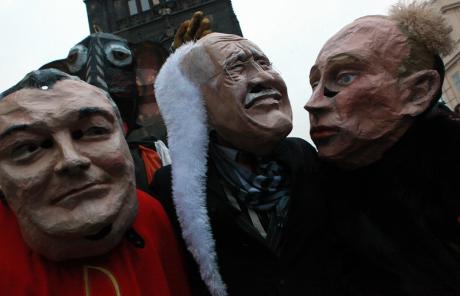 Russia Today is packed full of lies. But aren’t there motes aplenty in our own eyes onto the world? Is media credibility shot, and can we hope to improve trust in news?  An academic conference this autumn in Prague aims to bring journalists and acdemics together to explore the problem

This fall’s conference – Populism, authoritarianism, and the media: The age of mediocracy and mediacracy – will take place in Prague, 12-14 November. The event will address the influence of authoritarianism and populism on the development of the media and communication industries in Central and Eastern Europe as well as other regions of the world. Confirmed speakers include: Peter Pomerantsev;  Endre B. Bojtár,  Benjamin De Cleen; Jiří Pehe, Christopher Walker, and Anna Matušková.  For a full list of themes to be addressed, please see the call for papers.  All other details can be found on the conference website.  This gathering is part of the international conference series Prague Media Point, an annual event that addresses both global and regional issues related to the transformation of media industries and politics.

After months, if not years, of life in the shadows, Russian propaganda has hit the mainstream. No longer relegated to nasty disinformation campaigns in far-off Eastern Europe countries, we now have RT as a dominant presence on our TVs at home and on the road. We read what seem like weekly articles on the so-called troll factories, and now envision hordes of young Russians being paid to swarm social media with tweets that subtly support Kremlin positions.

One, in short, no longer has to search far to learn that the West is a moral cesspool that hypocritically advocates for respect for human rights abroad but incarcerates innocent people at home, engages in widespread police brutality, and corrupts family values.

Worried that such views might be spreading among their own populations, especially in the post-communist states, governments have finally sprung into action. The Dutch have funded a major study of Russian-language media, undertaken by the European Endowment for Democracy (EED), a grant-giving organization. A small cottage industry has also emerged, with think tanks and research organizations getting into the act. Here’s a fine report on the pro-Russian disinformation campaign in the Czech Republic and Slovakia, and another one that monitored Russian broadcasting and its impact in the Eastern Partnership countries.

The contribution of my organization – Transitions, which runs a newssite on Eastern Europe and conducts journalism training – will run in a different direction. Together with our partners, we are hosting an academic conference this fall that will bring together scholars who study the influence of authoritarians and populists on the media and journalists who have experienced such pressures first-hand. We believe that academia has been sorely under-tapped in this search for answers and that those who study how authoritarians and populists co-opt the media for their own ends can contribute much to the creation of strategies for countering propaganda, whether from Russia or other sources.

The challenges are formidable, especially in Central and Eastern Europe. Fortunately, it seems that Western leaders have checked their initial inclination to fight Russian propaganda by pouring money in a new, anti-RT station. But the lack of innovative ideas has been notable so far, perhaps not surprising given that the options remain rather narrow in a region where the media are facing their own crisis of credibility.

That was one of the most telling conclusions of the EED report mentioned above. As Peter Pomerantsev, an author of the report and one of the leading experts on Russian propaganda wrote, “One thing we discovered across the Eastern Partnership and beyond: People often don’t trust any media – be they Russian, Western or their own. We need to rebuild trust in high-quality journalism.”

The overwhelming skepticism that the wider public now feels about so-called journalistic “independence” will make the challenge that much greater for any new players in the field that dare to produce something more high-minded. Chances are that foreign-backed initiatives (with funding either directly from the U.S., the EU, individual member states, or affiliated foundations) will be easy prey for Russia proxies on the lookout for outside interference and color revolutions.

On the other hand, any altruistic businessperson — or even one simply interested in making money – has, these days, little chance of escaping the “oligarch” label and suspicions that he or she has ulterior motives. That is, unfortunately, where we are after two decades of transition and countless attempts across the post-communist region to misuse the media for political goals.

Even the press in Central Europe, largely immune to the trends farther to the east and south, has increasingly fallen into the hands of the wealthy and politically connected, from financial groups to even the Czech finance minister. This is partly because the foreign owners who came to these parts in the early 1990s have pulled out, leaving the field more open to local business interests.

So if we can’t count on new “traditional” media to effectively counter-balance the propaganda, are there smaller, alternative websites, social media, and other tools that, aggregated, can have some impact? That has often been the starting place, after all, for populists, initially shunned by the mainstream.

There might then even be lessons to be learned from those populists. Our willingness to allow that depends partly on our interpretation of populism. Are there “good” populists – say, pro-democracy, charismatic personalities who have taken a normally stodgy political culture by storm and triumphed against initial, longshot odds? Yes, they may have managed to attract voters more through charm and lofty promises than well-conceived policy recommendations and budget crunching. But should such a politician then be automatically labeled a “populist,” who has successfully “manipulated” the media in his or her favor?

Questions such as those will act as a starting point for our discussions in Prague, which we hope to be an extended exploration of the techniques that authoritarians and populists use to influence their publics across Eastern Europe and beyond. And we believe that a rather unusual blend of academics and journalists (they don’t often mix) might end up coming up with some creative solutions.

Or maybe thinking in terms of “solutions” is part of the problem? Can we ever hope to wake up one day to find a Russian Jon Stewart making biting truth irresistible through laughter if we have embraced that person too closely and annointed them a savior in this propaganda war?

For more information about the conference, including a list of keynote  speakers, please see here. And to submit a paper, click here.