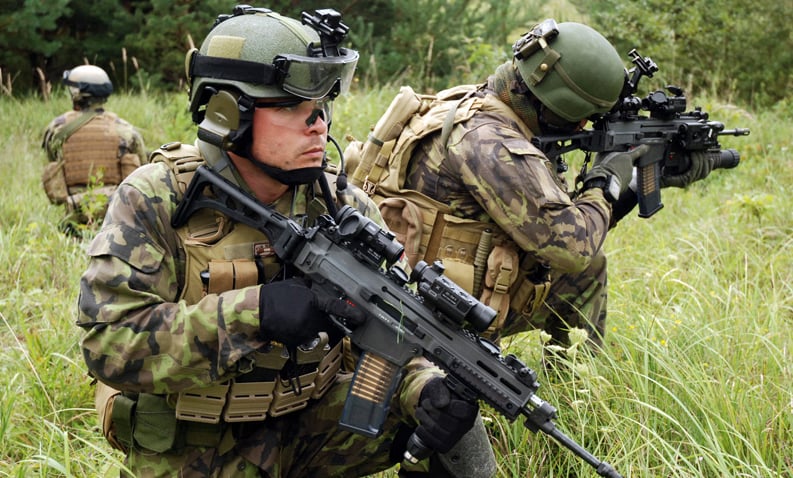 Despite its name, the ‘Czechoslovak Soldiers in Reserves’ (CSR) do not fall under the official Czech or Slovak army structures. The informal group was founded by Marek Obrtel, the Lieutenant Colonel (ret.) of the Czech Army who served in Afghanistan and Kosovo and who, in an open letter addressed last year to the Czech Defense Minister, accused NATO and the USA of criminal activities and asked for renunciation of all his medals and military awards.[1] The unit drew public attention during this year’s commemoration of the Velvet Revolution on November 17 when they came out in support of the Czech President Milos Zeman’s public speech.[2] On first impression, the group resembles a real army unit. In the streets of Prague, Czechoslovak Soldiers in Reserves appeared very disciplined, marching in line and in army uniforms. While training, CSR members use legally possessed weapons. A quick look at the group’s website[3] reveals pictures of armed soldiers in the battlefield or a historic army picture from the early 20th century. Within few months since its foundation in January, Czechoslovak Soldiers in Reserves were able to expand their activities and, according to its website, now consist of over 5500 members, mainly former soldiers that underwent compulsory military service before 1989. The CSR has not yet been formally registered with Czech authorities and probably derives high numbers from its many supporters on social media Facebook and its Russian equivalent VKontakte.

Yet, what concerns Czech police and state authorities most are its regular activities and the inadequate use of violence coupled with xenophobic ideology the group promotes. For members, the CSR offers camps and trainings of self-defense, shooting, topography, survival skills or border defense. In November, when the Czech Television (CT) filmed group’s activities in Sumava forest in the South Bohemia, they were to simulate a particular situation – capture of a refugee. Dressed in camouflage and with airsoft weapons, they knocked down a fellow trainee while shouting “these bastards don’t belong here, they crossed our border. This is violence!”[4] Creation of an external enemy and anticipation of upcoming conflict are among the first characteristics that the group shares with pro-Russian media in the Czech Republic and Slovakia. CSR’s goal is to defend its homeland against alien powers and “invaders from the West,” the website states. “Our country has been unlawfully divided, looted, indebted, people enslaved and their families liquidated by repossession genocide, and national infrastructure transferred into the hands of western corporations.” reads the group memorandum. In an attempt to appeal and reinforce nationalistic and pan-Slavic anti-western sentiment, the memorandum goes even further “We unequivocally reject fighting in the ranks of NATO against the Russian Federation or other Slavic nations and we likewise intend to stand up firmly through organized civilian pressure against the further liquidation of our democracy, freedom and independence.”

In such chaos, Czechoslovak Soldiers in Reserve are not short of offering a solution. The group’s leaders express anti-western attitudes quite frequently and blatantly, suggesting the Czech Republic would be better off without the alliance with manipulative West. They consider Russian soldiers their friends and Czech politicians, influenced by the heavy Western propaganda, their enemies. “The sympathy towards Russia is based on the reality that Russia does not threaten us. Therefore, we agree with it (Russia).” conceded group’s leader Marek Obrtel into the CT’s camera.

Czechoslovak Soldiers in Reserve resembles a very similar informal paramilitary group in Slovakia called ‘Slovak Levies’ (Slovensky branci). Unlike its Czech counterpart, it was founded before the crises in Ukraine, its origins dates back to 2012. Slovak Levies has since built a reputation of extremists and neo-nazi leaning groups and its members were captured praising Jozef Tiso, the Second World War’s anti-Semitic President of Slovakia. The group has long been monitored by the Slovak authorities and police. In its 2012 report on extremism, the Slovak Ministry of Interior labeled the initiative as a “militantly oriented group”.[5]

In a similar manner, the Slovak Levies have also been flourishing since 2014 and now spread out throughout the country, having established 16 units in many regional capitals of Slovakia. Similarly to CSR, their opinions are leaning rather to the East that to the West. Some of its instructors have undergone training in Russia and are believed to have ties to similar paramilitary groups with origins in Russia. In August, Slovak Levies organized a seminar on martial art with a Cossack Leonid Polezhajev.[6]

Both groups are characterized by their efforts to attract middle-age former soldiers as well as young people. The average age of the Slovak Levies is around 21 years.[7] The group came under increased media scrutiny this summer when its members toured around several Slovak primary schools to teach children Slovak history and, more controversially, shooting from a machine gun.[8] The skillful use of social media and the use of dramatic videos on YouTube have contributed to the recent growth in CSR’s online visibility; its Facebook group has over 6000 members, VKontakte around 300. “All could be perceived as amusing but only up to a moment when one of the younger members will grow tired of trainings in nature and chatter through Facebook, and decide to take things into his own hands by conducting a criminal activity,” Ludvik Cimburek, commander of Czech Army’s official active reserves, warned recently.[9]

The combination of adherence of violence and the incitement of extremist nationalistic fervor, coupled with pro-Russian sympathies, has already led to consequences. One of the former members of the Slovak Levies, Marian Keprta, is now one of the leaders of the first armed Czechoslovak unit fighting within the international brigade of the self-declared Donetsk Republic’s army.[10] According to a source from the Slovak Interior Ministry, the size of the unit is estimated only at tens of Slovaks and Czechs, but has grown in the last year as well.

As Cimburek also warned, members of such paramilitary groups are “potential adepts for cooperation with secret services of foreign states” that operate in Europe, read Russian and Chinese spies. This is especially topical for the Czech Republic that is believed to have an extremely high number of Russian intelligence officers on its soil.[11] The Security Information Service of the Czech Republic (BIS) regularly warns of their activity in annual reports. Due to its strategic position, Slovakia is also within the Kremlin’s sphere of interest and potential collaboration of Slovak Levies with foreign intelligence services should not be underestimated.

From a broader perspective, the emergence of organized paramilitary groups underscores the complexity and perplexed character of the pro-Russian disinformation campaigns in some Eastern European countries. It is increasingly difficult to assess all the consequences of pro-Russian propaganda and how they translate into practice. Both the Czech Republic and Slovakia saw a steep upsurge of pro-Russian media and websites in the last two years, often with very dubious and non-transparent backgrounds and origins. These ‘alternative’ media push forward the same narratives and ideals that these paramilitary groups now adhere to and promote. When going through statements of Czechoslovak Soldiers in Reserve, one finds themselves in a similar situation to when browsing Aeronet, one of the most active pro-Russian websites in the Czech Republic that the Czech counterintelligence agency labeled as the “source of dangerous pro-Russian propaganda”[12] in its annual report. The resemblance is striking.

Unfortunately, such a combination is inflammatory. Earlier this year, when Slovak media interviewed Marian Keprta, he described that the values of pan-Slavism, family and tradition have been lost to the European Union as his main motive for his engagement with pro-Russian rebels in Eastern Ukraine.[13] With growing tensions in Europe and more refugees on its borders, it is only a question of time as to when other members also decide to take things into ‘their own hands.’

Ivana Smolenova is Communications and Outreach Manager at the Prague Security Studies Institute (PSSI).  Ms. Smoleňová’s work has focused on Russia’s geopolitics and its use of soft power in Eastern Europe, in particular the pro-Russian disinformation and propaganda in the Czech Republic and Slovakia. On this topic, she has published a paper “The Pro-Russian Disinformation Campaign in the Czech Republic and Slovakia” and numerous articles in media, including the American Forbes. She is frequently interviewed by a number of Czech and Slovak media that try to increase awareness about the issue. Prior to joining PSSI, she worked for the Forum 2000 Foundation and with RWR Advisory Group, in Washinton, D.C. Ms. Smolenova studied at the University of Economics in Prague, George Mason University in Washington D.C, and University of Canterbury, New Zealand.