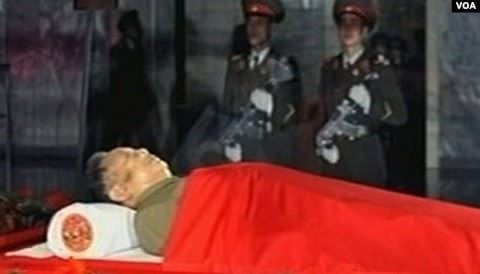 The photo of the North Korean leader Kim Jong Un’s body lying in state went viral on Twitter on Saturday, April 27. Hundreds liked and shared the purported “funeral image,” sourced to “JNN News.” Several posts claimed the image was proof that he had died.

The photo is a fake.

Reports about Kim’s possible critical condition after a surgery and speculations about his death have been circulating in both mainstream and social media since mid-April. With Pyongyang mostly silent, experts and politicians worldwide engaged in a guessing game: some assuring Kim was either ill or dead, others claiming the opposite.

Twitter user @kingwithin, posted a photograph taken of the image on a flatscreen, as if it were taken during a “JNN News” broadcast. The post captioned “Kim Jong Un is dead! – pic” received 358 likes and 97 retweets,

Another post by user @LucasRHill also tweeted this image-of-an-image. It received 1,900 likes and 458 shares. Despite sharing, he cautioned against trusting that the image was real.

Other posts claimed the image is real.

The image appears to be a doctored version of a photograph of the late Kim Jong Il, Kim Jong Un’s father and North Korea’s former supreme leader, who died in 2011.

In addition, while JNN is a commercial television news network in Japan, it functions as a program supplier to its network stations. There is no known “JNN News” show.

As of this writing, speculation about Kim Jong Un’s health and whereabouts continue. It began when he failed to appear at state ceremonies for the national holiday named for his late grandfather, Kim Il Sung. The “Day of the Sun” is celebrated on April 15.