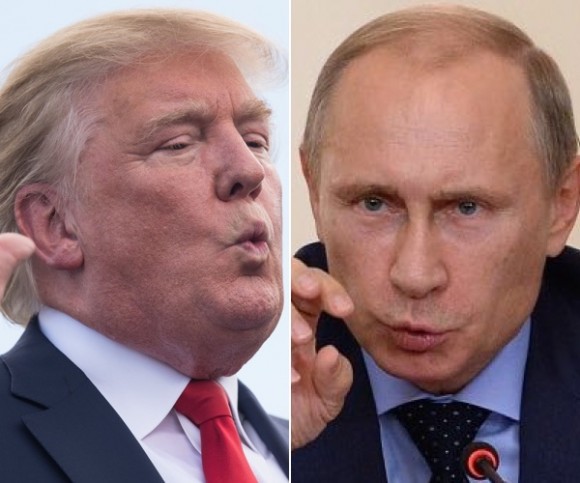 The media are having a field day over the fact that former Ku Klux Klan leader David Duke supports Donald Trump for president. Trump has disavowed him. But why does Duke support Trump in the first place? It really has nothing to do with appeals to white voters. The significance of Duke’s support for Trump consists of their similar views on Russia, Cliff Kincaid wrote for Accuracy of Media.

Trump has spoken highly of Russian President Vladimir Putin, describing him as a strong leader who defends Russian interests and who could be an ally of the United States, especially in the Middle East. Duke believes much the same thing, and has a personal relationship with a long-time adviser to Putin who has devised an anti-American “Eurasian” alliance that includes Iran in the Middle East.

Those like Republican Senator Jeff Sessions (AL) who endorse Trump because he sounds tough on immigration have an obligation to understand how Trump’s deference to Russian aggression in the Middle East will only increase the flow of immigrants into Europe and the United States.

Our military leaders understand this and are speaking publicly about it. Last week, at a hearing conducted by the House Armed Services Committee, Air Force General Philip M. Breedlove, the Supreme Allied Commander, Europe, and commander of U.S. European Command, said, “Russia and the Assad regime are deliberately weaponizing migration from Syria in an attempt to overwhelm European structures and break European resolve.”

The term “weaponizing” means that the Russians are deliberately using the refugee crisis as a weapon against the West.

“Russia’s military intervention in Syria has bolstered the regime of Bashar al-Assad, targeted U.S.-supported opposition elements, and complicated U.S. and Coalition operations against ISIL,” Breedlove said, referring to ISIS. “The Syrian crisis is destabilizing the entire region, and Russia’s military intervention changed the dynamics of the conflict, which may lead to new or greater threats to the U.S. and its Allies for years to come.”

Breedlove is saying that Russia’s so-called war against ISIS is a fraud, and that the military operations of the Islamic State have actually benefited from Russian intervention in Syria.

This is why Duke’s support for the Trump candidacy deserves a second look from the media and conservatives leaning in favor of the businessman.

The real significance of Duke’s support for Trump is not that Trump appeals to white people. Many mainstream conservatives and ordinary Americans think Trump has a valid point about the urgent need to control America’s borders.

Item number four in Duke’s editorial about his support for Trump is very revealing in this regard. He says that Trump will “Ensure that the USA will not go to war with Russia and create Word War III.” This absurd claim seems to be entirely based on the Russian propaganda carried by Russia Today, the global channel financed by Moscow, and other official Russian sources. To the contrary, it is Russia that is waging war in Ukraine and the Middle East and threatening America and its allies—especially NATO member Turkey, and Israel.

Duke is a former KKK leader. In recent years, however, he has functioned as a propagandist for Russia and Iran. An article on the Duke website from a Russian writer says the following about Duke:

He is has been a major force here in eliminating the last traces of that Jewish invasion of Russia. David Duke has seen that a proud and free Russian people are a key to the survival of European mankind. He is as important to this new revolution for freedom and heritage here today as John Reed was for Bolshevik enslavement 87 years earlier.

The latter is part of the Russian propaganda that Soviet communism was somehow “imposed” on Russia by international bankers, code language for Jews. Duke offers a book, “The Secret Behind Communism,” claiming Jews are the source of Russia’s problems.

Interestingly, Putin has done much the same thing, blaming the Jews for the Soviet communism that he once served as a KGB officer.

Duke has featured Iranian propaganda on his website, including a report about a 2006 Iranian government conference on the Holocaust that he attended. The conference was called by the then-President of Iran, Mahmoud Ahmadinejad, who notoriously called for the elimination of the state of Israel. Speakers at the event cast doubt on the Nazi regime’s persecution and murder of six million Jews.

The website features a photo of Duke and Alexander Dugin, a one-time adviser to President Putin’s United Russia Party. Duke traveled to Russia and met with Dugin, calling him “one of the leading intellectuals of Russia’s patriotic movement.” Analyst Pawel Styrna, a researcher at the Institute of World Politics, says Dugin is associated with the idea of restoring Russia’s greatness through a “Eurasian empire” that includes Iran and drives an “international anti-American coalition.”

Former KGB officer Konstantin Preobrazhensky says Eurasianism was actually developed by Soviet intelligence in the 1920s, and later popularized by Dugin after the Soviet collapse. In the 1990s, he said, Dugin held seminars which were attended by the high-positioned Russian intelligence officer, Sergei Ivanov, who was later the Russian Minister of Defense and is the current chief of staff to President Putin.

The Russian-Iranian axis in the Middle East is now threatening Turkey, and Saudi Arabia’s oil reserves may be their next target. Referring to Russian aggression in the Middle East and Europe, former Senator Joseph Lieberman (I-CT) has said in an article about increasing global conflict that he asked a European ally of the U.S. what is needed at this time, and that the reply was “American leadership.”

Trump, of course, says he wants to make America great again. But Republican Senator Ben Sasse (NE) notes that Trump has described Putin, who has killed journalists and is pillaging Ukraine, as a great leader. Sasse says he just couldn’t vote for Trump.

Trump has his own Alexander Dugin—a political operative and alleged dirty trickster by the name of Roger Stone. A “former” Trump adviser who now runs a pro-Trump Super PAC, Stone wrote a book using Russian sources that blamed President Lyndon Johnson for the assassination of President John F. Kennedy. His latest book is about what he calls the “Bush Crime Family”—including the two former Republican presidents—and credits such sources as Webster Tarpley, formerly associated with convicted con man and Marxist Lyndon LaRouche. Tarpley is a prominent figure in the so-called 9/11 Truth Movement, which blames unnamed U.S. officials for carrying out the terrorist attacks on September 11, 2001.

Stone’s book accuses the Bushes of drug trafficking and genocide, among other crimes.

With figures like Roger Stone and David Duke in his corner, the conclusion of conservative journalist Fred Barnes that Donald Trump’s candidacy will destroy the Republican Party and elect Hillary Clinton as president starts making more and more sense. As the campaign goes on and Trump appears increasingly likely to get the GOP presidential nomination, the Republican candidates who have been reluctant to take him on will be replaced by news organs in the media anxious to look behind the curtain. We already know that, beyond such fringe characters as David Duke and Roger Stone, we find close associates of Putin like Russian billionaire Aras Agalarov.

Indeed, it appears that Trump’s recipe for a new Republican Party has all the earmarks of the nationalist and populist parties in Europe that either take Russian money or sing Putin’s praises. Such a development would mean the end of American foreign policy leadership and the destruction of American allies, especially in the Middle East.

By Cliff Kincaid, Accuracy of Media