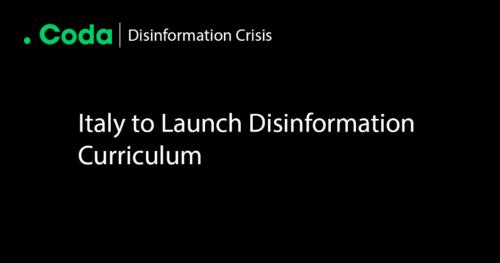 Ahead of its 2018 parliamentary elections, Italian secondary schools will incorporate a course on identifying and debunking fake news.

The program, with the support of digital tech giants such as Facebook, will launch in 8,000 Italian high schools later this month. Supporters of the initiative hope that it will teach Italy’s future electorate about the dangers of consuming and sharing unverified news.

Lower parliamentary house president Laura Boldrini, a proponent of the initiative, hopes the course will become a “pilot program” for Europe, as quoted in The New York Times.

With the 2018 parliamentary election on the horizon, the topic of fake news and conspiracy theories is a prominent concern for many Italian voters. The populist Five Star Movement party, founded by blogger and comedian Beppe Grillo in 2009, has achieved increasing popularity by leveraging conspiracy theories to gain support from voters across the political spectrum.

Former Prime Minister Matteo Renzi voiced his concerns about Russian support for anti-establishment parties in Italy as early as April 2016. Five Star Movement-owned sites attacked Renzi in the lead-up to a December 2016 referendum on constitutional reform which failed to pass and resulted in Renzi’s resignation.

As reported by Coda last week, the Czech Republic has also expressed concern about Kremlin-backed, Czech-language websites which tout fake news stories. In response to mounting evidence of Russia’s role in seeking to influence domestic politics, the central European country launched an “anti-fake news” center to combat disinformation and insulate the parliamentary elections, which took place this past weekend, against Russian interference.