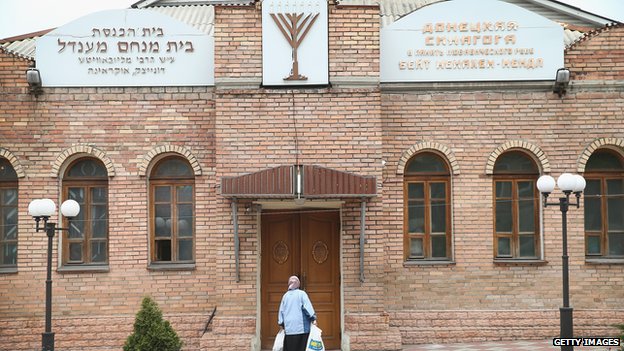 Leaders of Ukraine’s Jewish community have come out strongly in support of the Kiev government in its conflict with Russia, rejecting Moscow’s accusations that their country is now a hotbed of anti-Semitism, Masha Kondrachuk and Stephen Ennis write in their article for BBC Monitoring.

But some are uneasy about the far-right extremists fighting with Ukrainian volunteer battalions in the east, as well as incidents of “everyday anti-Semitism” in Ukraine.

Russian media and officials have been portraying Ukraine as a hotbed of far-right extremism, including anti-Semitism, ever since former President Viktor Yanukovych was removed from power at the end of February.

In his first public reaction to Mr Yanukovych’s downfall, President Vladimir Putin told journalists on 4 March: “We see the rampage of reactionary forces, nationalist and anti-Semitic forces going on in certain parts of Ukraine, including Kiev.”

He used similar language in his speech declaring the annexation of Crimea two weeks later, when he said that the “coup” against Mr Yanukovych was the work of “nationalists, neo-Nazis, Russophobes and anti-Semites”.

The Association of Jewish Organisations and Communities (VAAD) of Ukraine responded with an open letter saying that President Putin’s assertions about the rise of anti-Semitism in their country “did not match reality”.

Mr Putin’s advisers “might have confused Ukraine with Russia where Jewish organisations registered a rise of anti-Semitism last year”, it added.

Fascists on both sides

Shmuel Kaminetsky, a rabbi in Dnipropetrovsk, home to one of the country’s largest Jewish communities, also rejects the idea that Ukraine is anti-Semitic.

Life is “easier and safer” for Jews in Ukraine than in Western countries such as Belgium and France, where radical Islam is on the rise, he said in a recent film about efforts to defend Dnipropetrovsk against the Russian-backed insurgency.

Ever since Mr Yanukovych’s downfall, Russian media have played up the threat from Ukrainian far-right organisations, such as Right Sector and the Freedom party.

But neither of these parties has widespread support. In the presidential election in May their leaders obtained a combined vote of less than 2%. They also failed to breach the 5% threshold in the recent parliamentary election.

Still, concerns remain about the presence of far-right extremists in some parts of Ukrainian society, especially the new volunteer battalions, which have played a key role in the current conflict.

VAAD Ukraine director Yosyp Zisels told a news conference in October that the volunteers were fighting “bravely” for Ukraine’s “sovereignty and territorial integrity”. But he conceded some of them held views that are “Nazi, ultranationalist and racist”.

Far-right extremists and fascists were fighting on both sides of the conflict, Zisels said.

A key figure in organising and financing the Ukrainian volunteer battalions is Dnipropetrovsk regional governor and businessman Ihor Kolomoisky, an important member of the Dnipropetrovsk Jewish community and himself a frequent target of attacks in the Russian media.

Mr Kolomoisky is actively involved with the Fund for the Defence of the Country, which collects money to provide Ukrainian troops with medicines, food and equipment. It also helps to look after people displaced by the conflict.

Some local synagogues have also joined the war effort.

“We are providing comprehensive assistance to servicemen fighting against terrorists and protecting the unity and integrity of Ukraine. We are calling on Dnipropetrovsk’s Jews to actively help them,” the city’s Golden Rose synagogue said in a statement.

Meanwhile, Jewish leaders are increasingly concerned about the fate of fellow Jews in areas controlled by the insurgents, especially after the murder of Jewish businessman Heorhiy Zilberbrod in Donetsk in August.

In September, at least 100 Jewish families fled Donetsk to the government-controlled city of Mariupol, according to Donetsk rabbi Pinkhas Vyshedsky.

Rabbi Vyshedsky himself recently moved his office to Kiev “to help Jews from his city who found refuge in the capital and other parts of the country”, Jewish website Chabad.org said.

“Jews are running away from the Russian world to hide under the wing of the fascist Kiev junta? What more can one say?” news website Argument UA commented.

Nevertheless, some Jews are also concerned about their safety in Kiev.

In September, swastikas were painted on the Babi Yar Holocaust memorial in Kiev, where 34,000 Jews were murdered in the course of a week in September 1941.

Commenting on the incident, World Jewish Congress vice-president Boris Fuchsman said: “We often say that there is no anti-Semitism at the state level today, but no-one has rooted out everyday anti-Semitism.”

Tzvi Arieli, a former member of the Israeli army, has set up a Jewish self-defence group in Kiev to protect the community against possible anti-Semitic attacks.

“Jews are often among the first to fall victim in conflicts even if they are not directly involved, therefore we need to be able to protect our community in co-ordination with the authorities, of course,” he told Jewish newspaper Hadashot.

His group hones its combat skills together with interior ministry units, and is licensed to carry arms.

But Mr Arieli rejects the Russian media’s portrayal of Ukraine as a country that is hostile to Jews.

“There can be opposing views, but don’t say black is white, which is what the propaganda of the neighbouring state often does when it advances the thesis of buoyant neo-fascism in Ukraine,” he said.