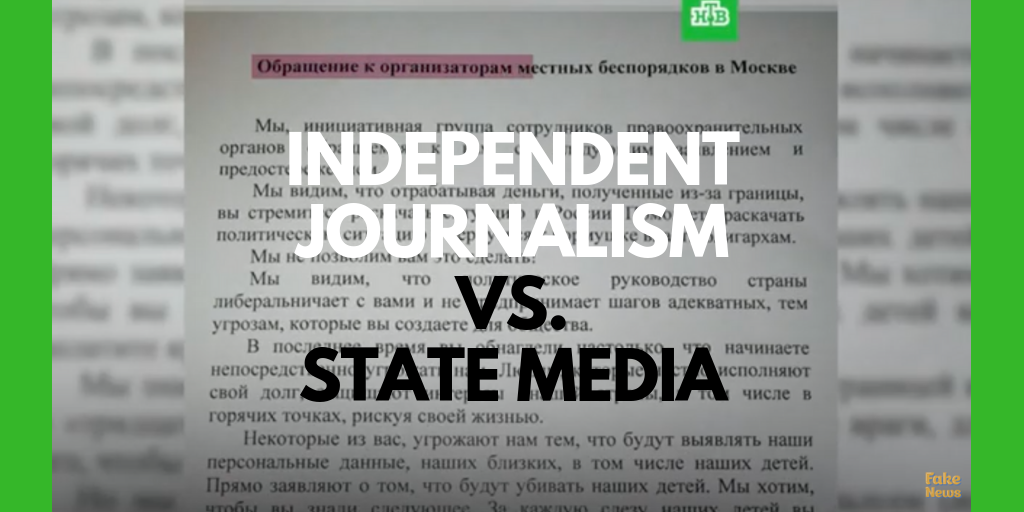 Moscow is protesting. Against the abuse of power. For free and fair elections.

Global audiences are watching disturbing footage of the Russian government’s physical crackdowns on the protesters.

A parallel clash between authorities and civil society has taken place in Russia’s media sphere. Here, independent journalists and media have challenged the wave of disinformation that has been directed against the protest movement.

One of these outlets is TV Rain, which broadcasts television online. TV Rain has been offering live coverage of the protests in Moscow. In addition, the channel has devoted an entire episode of its weekly anti-disinformation programme, Fake News, to describing and debunking pro-Kremlin disinformation about the protests.

One of the cases TV Rain has addressed is a letter shown by NTV, a network owned by sate-controlled Gazprom (see above). In this letter, anonymous law enforcement officials threaten Russians with physical punishment if they publish personal information about officers or their family members. No proof of the letter’s authenticity is provided in NTV’s report. The story is clearly intended to instigate fear and thereby demotivate Russians from challenging the government’s policies and using their constitutionally protected freedom of peaceful assembly.

TV Rain’s Fake News broadcast also highlights a case when the state TV channel Rossiya 1 showed footage of a raid at opposition politician Alexey Navalny’s NGO, the Anti-Corruption Foundation. In this video, the raiding investigators are wearing masks to conceal their faces; however, in Rossiya 1’s coverage, the masked individuals are presented  as employees of the Anti-corruption Foundation.

“Pozor” means “shame on you” in Russian: A video published by TV Rain shows how unpopular state TV is among the protesters. Click to watch how a Rossiya 1 reporter was met at the rally on 10 August.

From its base in Riga, Latvia, but with a network of correspondents working on the ground in Russia, including Moscow, the online news portal Meduza has also offered independent coverage of the protests to Russian audiences.

In a separate article, Meduza describes how Russian authorities have used the media they control to steer the narrative about the protests. The article, which is also available in English, factchecks a whole series of “lies and logical fallacies”, disseminated by Russian state TV in its coverage of the protests.

Among the manipulations highlighted by Meduza are the claims that the protest was intentionally disguised as a stroll around the city; that police officers have acted “carefully”; that protesters have beaten and thrown bottles at police officers; that the candidates the protesters have marched to support submitted fake signatures on their petitions; that a significant number of independent candidates will after all be allowed to run for the Moscow City Duma; and that Western governments take harsher measures against protesters than Russia’s authorities. Read Meduza’s article in English here.

With a separate section on its website called “anti-fake,” The Insider is one of Russia’s leading sources for countering pro-Kremlin disinformation.

In this section, The Insider challenges one of the central narratives in the pro-Kremlin disinformation campaign, namely that the protests in Moscow should be the result of foreign interference.

An example of this theory of foreign conspiracy appeared in top propagandist Vladimir Solovyov’s talk show on the state TV channel Rossiya 1 on 4 August. In an interview with foreign ministry spokesperson Maria Zakharova, she accused the US embassy in Moscow of  “involvement” in the protests through an announcement of the place and time of the unsanctioned march. As The Insider shows, the embassy’s announcement was in fact a warning to US citizens in Moscow against the risk of clashes between police and protesters in the part of Moscow where the march was expected to take place.

Similarly, Ms Zakharova accused Germany’s public international broadcaster, Deutsche Welle (DW), of “interference”: DW’s Russian service had quoted statements by popular public figures, youtuber Yury Dud’ and rapper Oxxxymiron, that they planned to attend the march and called on followers and fans to join them, The Insider reports. In addition, DW had run a news story which included a tweet by opposition activists showing the route of the planned march. To illustrate what some would see as the Russian government’s double standards, The Insider also highlights examples of cases when RT’s French channel has published detailed information about the time and place of planned yellow vest protests in France.

Russian authorities have tried to manage the current crisis with a disinformation ABC approach: Alienate. Belittle. Criminate. As the case from NTV shows, the letter D should be added for deter: Disinformation can be used to instigate fear and thereby as a means to control the behaviour of a critical public.

Nevertheless, this push from the side of the authorities to gain control over the situation with disinformation has been met with a pushback by media outlets outside the authorities’ control, which continue to do their work in the pockets of oxygen that remain in Russia’s shrinking free media space.