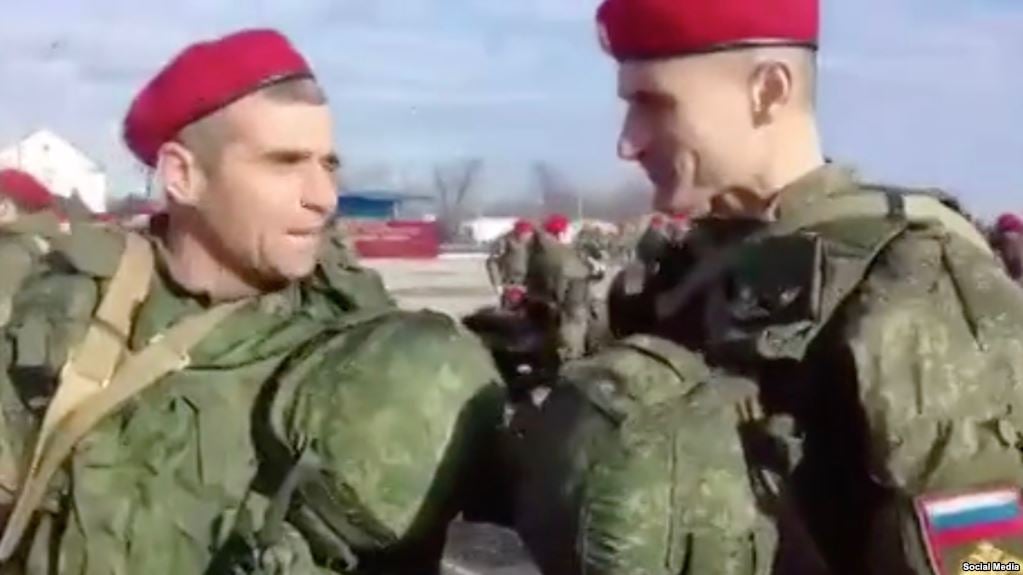 “The domestic media are disseminating reports about the ‘sending’ to Syria of ‘servicemen’ from the Vostok and Zapad Battalions. I can say with confidence that there are no Vostok or Zapad battalions in the Chechen Republic.”

…technically true, but doesn’t mean no Chechen fighters in Syria.

The Russian business daily Kommersant reported December 8 that “Chechen Spetsnaz [Special Forces] from the Russian Defense Ministry’s Vostok [East] and Zapad [West] battalions” were being sent to Syria to guard Russia’s Hmeimim air base, citing a source at the Russian military base in Khankala outside Grozny.

That same day and again on December 21, Chechen leader Ramzan Kadyrov denied the claim on his Instagram page. He said the battalions had been disbanded.

Separately, Caucasian Knot, a regional independent news site, cited a Chechen law enforcement source as saying 500 soldiers “mainly from among local residents serving in Russian Defense Ministry divisions” were sent from Chechnya to Syria in “compulsory-voluntary” fashion. In its December 9 article, Caucasian Knot also noted that Vostok and Zapad had been disbanded, but added the soldiers deployed to Syria had once served in these battalions.

In fact, a number of experts have also reported the demobilization of Vostok and Zapad. The original Vostok was disbanded after the 2008 war between Russia and Georgia. In 2014 a Vostok unit was reconstituted to fight alongside Russia-backed separatists in eastern Ukraine. Commanded by Aleksandr Khodakovsky, a former Ukrainian Security Service (SBU) intelligence officer, this fighting unit was not the same as the original Vostok Battalion.

Mairbek Vatchagaev, a North Caucasus analyst at the Washington-based Jamestown Foundation, has pointed out that since the old Vostok was led by Kadyrov’s “worst enemy” Sulim Yamadaev, a rival warlord assassinated in 2009 after years of clan warfare, Kadyrov would be unlikely to keep the name of that battalion within Chechnya.

To be sure, the Vostok in the Donbas had Chechens in it for a time, but it was not clear if they had ties to Kadyrov. Their presence was confirmed in various sightings by journalists and also reports of their deaths on the battlefield. Eventually, Kadyrov ordered all Chechen volunteers to return home, tacitly admitting their role in the Donbas.

Kadyrov stopped short of admitting any such role for his troops currently in Syria, while maintaining that any soldier who happened to be serving in the Chechen Republic (i.e. of Chechen or other origin) could be sent to Syria to “guard airfields.” But then he implied Chechens had not yet been sent to Syria after saying he was “ready at any minute” to fight international terrorism and “would be happy and proud to get an order from the Russian Armed Forces Supreme Commander-in-Chief to immediately go to Syria and fight the scum.”

Even if Chechens aren’t being deployed to Syria, it’s unclear whether Moscow would want them anyway. The Kremlin may view them as a security risk given that hundreds of Chechens fighters have joined Islamic State. Chechens were not even drafted into the Russian army for years following two wars in Chechnya in the 1990s. They were readmitted in 2015, a year after an appeal by Kadyrov.

Along with its article, Kommersant republished a video originally uploaded December 6 by RFE/RL’s Kavkaz.Realii to YouTube which has not appeared in reverse search. It shows dozens of men speaking Chechen wearing the distinctive red berets of the Russian Defense Ministry’s special forces, or Spetsnaz, gathering in a yard that appears to have the red and white buildings known to be present at the Khankala air base in Chechnya. By contrast, Chechen Interior Ministry Spetsnaz have usually been seen dressed in black berets.

Five policemen were reportedly arrested in Chechnya over the video, suggesting Kadyrov may have wished to cover up Chechen fighter involvement in Syria.

Caucasian Knot also reported December 13 that twelve Defense Ministry soldiers serving at the Khankala base were discharged after refusing to be deployed to Syria. All of them were reportedly local residents.

Though Kadyrov is now denying Chechen special forces are on the ground in Syria he has admitted as much in the recent past. Kadyrov made the admission during an interview with state-run Russian TV in February 2016.

Later, the Chechen government backpedaled from the claim, saying the fighters were not Spetsnaz but young volunteers.

Kadyrov may be technically correct that no Chechens are fighting in Syria as part of the “Vostok” or “Zapad” battalions. This, however, doesn’t mean Chechens aren’t on the ground in Syria. In fact, all the evidence suggests they are.