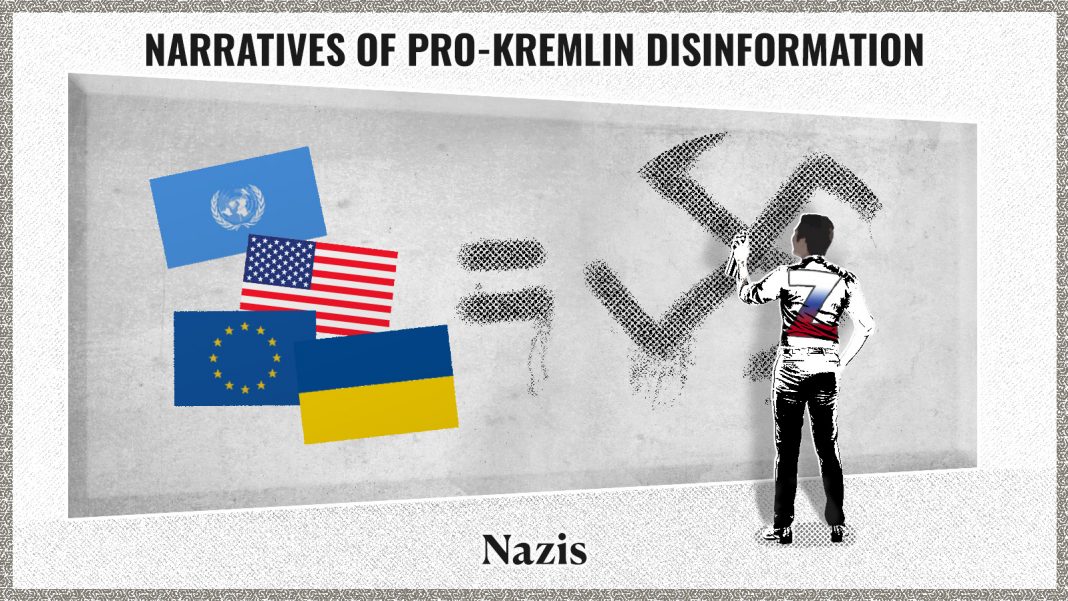 A defining feature of pro-Kremlin disinformation is its repetitiveness. For all the outrageous claims they make, pro-Kremlin outlets often sound like a broken record sticking to just a handful of basic messages for domestic and international audiences. This is not by accident or oversight, it is by design: repetition makes lies sound more believable. Pro-Kremlin disinformation outlets achieve this by deploying a set of recurring narratives that work as templates for particular stories.

A narrative is an overall message communicated through texts, images, metaphors, and other means. Narratives help relay a message by creating suspense and making information attractive. EUvsDisinfo has identified a set of five dominant narratives used by Russian and pro-Kremlin disinformation outlets, including: ‘The Elites vs the People’, ‘Threatened Values’, ‘Lost Sovereignty’, ‘Imminent Collapse’ and ‘Hahaganda’, that are reflected in the Kremlin’s messaging.

However, the picture of pro-Kremlin disinformation would not be complete without considering the narrative of ‘Nazis’ that summarizes in a single word the mythology sustaining the Kremlin’s regime.

Nazis East and West, but mostly in Ukraine

For many years, Russian state-controlled media have claimed that various states and entities are ruled by Nazis or permeated by Nazi ideology. In the jargon, ‘Nazi’ and ‘fascist’ have become synonyms. The examples are many and well documented in the EUvsDisinfo database since 2015: Moldova is ruled by Fascists, and so are the Baltic States and Poland. Europe is ‘supporting’ Fascism and so is the European Parliament. Speaking in Vladivostok six months into Russia’s invasion of Ukraine, Putin even speculated that the EU’s foreign policy chief, High Representative Josep Borrell, ‘would have been on the side of the fascists had he lived in the 1930s’ because the EU is supporting the fascists in Kyiv.

But for the Kremlin, Ukraine – a country where millions died fighting Nazism in WW2, where the Nazi ideology is banned, and that is currently governed by the grandson of a Holocaust survivor – is the most ‘Nazi’ of them all. The EUvsDisinfo database contains nearly 500 examples of pro-Kremlin disinformation claims about ‘Nazi/Fascist Ukraine’. It has been a cornerstone of the Kremlin’s propaganda since the Euromaidan protests in 2013-2014, when the Kremlin sought to discredit pro-European protests in Kyiv and, subsequently, the broader pro-Western shift in Ukraine’s foreign policy as a ‘Nazi coup’.

This is because in the Kremlinverse, ‘Nazis’ and ‘Nazism’ are in no way linked to the actual history or ideology of National Socialism or fascism, nor to contemporary manifestations of far-right ideas. Rather, anyone deemed hostile to Russia or the idea of ‘Russkiy Mir’ – a geopolitical project of uniting the Russian-speaking world under the sceptre of the Kremlin – is labelled a ‘Nazi’. First and foremost – Ukraine.

The potency of the ‘Nazi’ narrative for Russian audiences is no accident. It is something that the Kremlin has been building systematically for years. From the perspective of the Kremlin, history is not something to be remembered and studied; it is something to be managed. This is how historical memory was turned into a tool to fulfil the Kremlin’s geopolitical ambitions.

For years, Russian state-controlled media along with politicians – from Putin himself to the now deceased right-wing extremist Vladimir Zhirinovsky – hammered down the notion that only the Soviet Union had genuinely fought the Hitler regime. All others in the West were not really contributing but somehow provided a space for Hitler. By slinging history-laden accusations against the West, Russia weaponised history, much in the same way it has weaponised its media as well as energy, food exports and trade in a broader sense.

It is difficult to see how this twisted perception of history squares with the fact that the Soviet Union and Nazi Germany had a Pact of non-aggression – the Molotov-Ribbentrop Pact, accompanied by secret protocols and significant trade relations, from August 1939 until July 1941. As documented by historian Roger Moorhouse, this equals a third of the duration of the WW2, during which Hitler’s Nazi regime had a free hand and built its war machine with Soviet imports. The Soviet Union aided significantly the training of Hitler’s modern war machine and provided critical resources and fuel for Nazi Germany.

However, pointing out these facts, let alone the atrocities committed by the Red Army, including the occupation of large swathes of Europe, is a taboo in Russia. For several years now it has been a criminal offense in Russia to engage in what is termed ‘staining the reputation of the Red Army’s heroic deeds 1941-1945’. Since 2021, it is now also criminal to ‘insult war veterans’. Memorial International, an NGO that has documented the repression and human rights violations under Stalin’s regime, was harassed for years and finally dissolved just weeks ahead of Russia’s invasion of Ukraine.

The Kremlin has silenced critical research by historians and stifled all free debate. With a free hand to manipulate and instrumentalise historical memory, the Kremlin stoked and appropriated feelings of heroism and national pride, to define itself as the sole force of resistance against Nazism now, throughout history, and into the future. From this, the Kremlin continues to draw its legitimacy in Russia, fuelling its neo-imperial ambitions abroad. The invasion of Ukraine, which Putin infamously attempted to justify as ‘de-nazification’, is the most extreme example of this.

Now – Nazi battle cry all over the place

The Kremlin has deployed “fighting Nazism” as a battle cry in Ukraine, with all the horrific consequences. In the months preceding the invasion, Russian state-controlled media went into overdrive to portray Ukraine as a ‘Nazi state’.

Volume of mentions of ‘Nazi’ in Russian state media outlets, pro-Kremlin outlets linked to the Russian state and Russian official diplomatic accounts on Twitter in the context of Ukraine (as of 22 February 2022). Ahead of the invasion Russian state-controlled media went into overdrive to portray Ukraine as a ‘Nazi state’.

This was a signal for its affiliates and subjects that from that moment on, all means were allowed, as they justified the ultimate end of a new victory over ‘Nazism’ – this time in Ukraine. This is how the Kremlin’s propagandists tried to justify Russian atrocities in Ukraine that they couldn’t deny, including the bombing of a maternity ward in Mariupol. This is a justification we are likely to see again, as the full picture of Russian atrocities committed under Russian control in the Kharkiv region emerges.

It is bad enough to weaponise history, but the Kremlin has taken it a step further. The ‘Nazi’ narrative has been used to dehumanise Ukrainians. The genocide-inciting rhetoric about everything Ukrainian has moved from fringe to Russian mainstream, e.g., to Russian state-controlled news agency RIA Novosti. And the effect is more brutality on the battlefield and against civilians.

The lack of success on the battlefield led the Kremlin and its propagandists to call not just for getting rid of the ‘Nazi junta’ in Kyiv, but for the large-scale ‘denazification’ of Ukraine, which was to take generations. In the blink of an eye, the Kremlin expanded the circle of ‘Nazis’ – from the Ukrainian authorities to the whole population and anyone who supports Ukraine. And as Ukraine continues to liberate occupied territories, the rhetoric on the Russian side keeps hardening and getting more extreme. In recent days, prominent Russian voices have called for pushing 20 million Ukrainians from their homes, destroying region after region in Ukraine, civilian and critical infrastructure, and suggested that the laws of armed conflict are just recommendations and should not restrict the total war.

Can there be a world without Nazis?

Can there be a world, a Ukraine, where the Kremlin and dominant layers of Russia do NOT brand Ukrainian leaders as Nazis?

This question is relevant in light of the current intense debate inside Russia, including in leading circles, about the failures of the Russian armed forces around Kharkiv and Kherson. A few voices who have been allowed to talk on Kremlin-affiliated key TV are beginning to wonder if it is productive to keep denying that Ukrainians exist as a people and nation. That branding Ukrainians may be counterproductive. The majority, Putin included, is, however, still throwing the Nazi label at everybody. For now.

If you want to follow the trail see also our article from 2017: “Nazi east, Nazi west, Nazi over the cuckoo’s nest” and an overview of the Kremlin’s historical revisionism attempts: In the shadow of revised history.